'Come, let us reason together.' 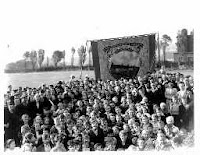 Further to my last... on the Guardian site today a theology lecturer called Luke Bretherton picks up and expounds on David Miliband's 'community' platform, pointing out some useful elements of the relevant British social history (also some things I never knew about 1930s Chicago...) and speaking very warmly of the CitizensUK organisation as a modern-day exemplar of grass-roots organisation. I don't quite agree with Bretherton that Gordon Brown's pre-election speech to Citizens London, drawing on 'his Presbyterian and Labour roots', was especially good or noteworthy, other than to the solid Labour faithful, who had surely heard sermons from Brown before, and to the Labour apparatchiks who'd been twisting and waiting in agony for the PM to get his game face on... But given Phillip Blond's coverage in recent months, clearly Labour needs some articulate theology lecturers on its side. The picture herewith is of the New Bearpark Lodge colliery banner, taken 27 July 1951, courtesy of Beamish Museum and the Durham Miner Project website.
Posted by Richard T Kelly at 02:18:00 No comments: Links to this post

David Miliband and common cause 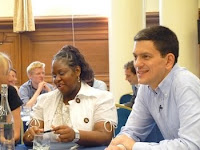 'DM' gave a speech in Wales last week in honour of Keir Hardie, and I found the transcript impressive and well worth reading for numerous reasons. There are just two bits I want to comment on:
1. I owe to the excellent South Shields-born historian Robert Colls my conviction of recent years that the Independent Labour Party missed a trick (or else managed a sleight of hand) back in its formative years. To simplify Colls' arguments hugely (and I apologise for having mislaid the source reference): the late 1800s/early 1900s, certainly in the North of England, saw an extraordinary foment of working class culture and social-minded endeavour, based on the principle of 'the free union of individuals for the attainment of a common object.’ Colls cites 'the nonconformist and Methodist chapels and Sunday schools, the Cooperative Wholesale Society and Cooperative Union, and the national friendly societies, and after them, the allotment societies, the brass bands, voluntary bodies, sporting clubs, youth organizations and the like - which drew their members from the streets but which also projected their activities out on to a wider, civic world.' For Colls this foment wasn’t expressly 'socialist', but certainly socialistic. And, as he puts it, 'seen in this light, the emergence of a Labour party and a parliamentary road to socialism looks less like the culmination of an existing working-class politics and more like the beginning of a new, and rival, form. Nevertheless, the Labour party was nothing without the associations...' In other words, you might say, the working class had been getting on fine with organising itself, short of the Westminster representation bit...
Now then - here is David Miliband on the podium in Wales:
"The Independent Labour Party was self-organised. It brought together the co-operative movement, the building societies, the trade unions, all shades of faith communities into a broad based alliance for the common good… I don’t wish to simply be leader of the Labour Party. I seek to renew the Labour Movement – in idea and in organisation. Building relationships and a common life through common action for the common good in communities across the country. That is why part of my leadership campaign is the drive to train 1000 community leaders around the country – whether they vote for me or not..."
You see the problem(s)... First up, does an initiative to 'train 1000 community leaders' give any heartening sense of the pulse of 'common action' out there in the country? Or is it not the case, as Colls has often contended, that we talk all the more of community these days precisely because it's lost to us? More generally: is the Labour Party and its leader always and forever the best or most appropriate leader of 'the labour movement'? Pragmatically I'm used to saying yes, but when Miliband re-opens the annals in this fashion one does feel that slight and regrettable sense of entitlement within the belly of the Party beast. If DM thinks this 'renewal' he's proposing is a good idea in itself then good on him; doubtless he's aware it's not in itself going to refashion Labour as an electoral powerhouse, so that alone suggests he's doing it for love. Moreover would a Labour Party led by DM expect to be earning or inheriting the votes of all these communities he wants to link in with? But again, if he's not even bothered whether they vote for him then presumably he's not taking anything for granted.
2. This is just funny, if gratuitous:
"Why did Hardie refuse an alliance with the Liberals? Why did he insist that Labour had to be an independent party? It was not because he rejected the great causes of liberty – of freedom of the individual – but because he considered it vital that when the national interest is considered, the interests of working people are considered to be part of that. So that those who were then exploited and excluded could take their rightful place in the body politic and in the governance of our nation. Hardie said, repeatedly, that although there were many things that we can agree on with liberals, when it came to the conflict between capital and labour, between the banks and the real economy, they would always side with the Conservatives. He didn’t have a crystal ball, but he would have predicted that Nick Clegg would be busy defending a Conservative Budget over 100 years after he was elected MP for Merthyr Tydfil and Aberdare..."
Posted by Richard T Kelly at 15:22:00 No comments: Links to this post

The killings in Scafell and East Denton

Sad to say, there is something quite specific in the collusion of the English summertime and the 24-hour news cycle that brings to undue prominence such a miserable story as that of the late Raoul Moat and the iniquitous violence he meted out to selected persons following his release from HMP Durham. Northumbria Police are going to face some harsh questioning over the length of the manhunt, but I'm not so sure it can be made any easier to hunt a man in difficult rural terrain that he happens to know very well. Nor am I sure it can be made much more rigorous to follow up on the many and varied threats and oaths uttered by prisoners as they prepare to exit prison. But I'm very sure we will learn more in days and weeks to come about Moat's professed grudge against the Northumbria force, who apparently arrested him on 12 occasions, and have charged him with seven separate offences at various times.
I should confess that for a lot of last week I was unhappily reminded of the Tyneside demi-monde I looked into while writing Crusaders: specifically the fictional character of the Washington-born ex-bouncer Steve Coulson, both his body and his ability to enact violence massively inflated by steroids (his preferred ride also a black Lexus.) But if you take the length of this land then the tougher parts of Tyneside are hardly unusual in their creation (and mingled fear and admiration) of hard men. Often you hear efforts to mitigate the hardness through a sentimental local view of 'gentle giants', 'salt of the earth' and so forth. But such efforts have the feel of special pleading, or a bad conscience. And nobody who's been on the receiving end of iniquitous violence is ever fooled.
Posted by Richard T Kelly at 09:29:00 No comments: Links to this post