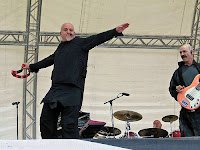 Last weekend me and my family had the great good fortune to stay a few days in the country cottage of one of England’s finest composers. Quite apart from the lovely living arrangements, I even got to do a little writing in his office, having carefully cleared a space to spread my things, between the piano and the sheets of notation and the pocket metronome… The bookshelves in the cottage were fairly choice too, replete with good fiction and non-fiction, but I was especially interested in the selection of books on music. Typically, though, I zeroed in on a volume called Good Vibrations, about the history of rock/pop production techniques.
One section therein that grabbed me concerned the introduction to musical possibilities c. 1980 of the Fairlight, an early sampler which loaned itself to terrific aural experimentation. The first two musical types to invest their own money in this expensive device in the UK were Peter Gabriel, and Durham’s own Trevor Horn. And I remember, as if it were yesterday, the autumn/spring of 1982-83, running out to three separate long-playing records (vinyl, of course) that made stunning use of the new technology: Kate Bush’s The Dreaming, Peter Gabriel’s fourth self-titled solo album, and Malcolm McLaren’s Duck Rock, produced by Horn. (That last one, an early experiment in world music piracy, had some marvellous tracks, only partially marred by the presence of McLaren himself, such as the juju-inspired Soweto.)
Prior to those bits of shopping one of the big musical revelations of my young life was in late 1982 when I saw a South Bank Show on the recording of aforementioned Peter Gabriel IV. The picture it presented, enforced by amazing music, of Gabriel’s genius-like marrying of rhythmic and melodic and lyrical/cerebral qualities, was incredibly powerful to an impressionable youngster. I suppose I was particularly gripped by the description of how Gabriel’s bookish idea for a song provisionally titled ‘Jung in Africa’ became this thunderous track, The Rhythm of the Heat.
A few years later Alan Parker persuaded Gabriel to remodel the IV songs and a few others from his back-catalogue into a score for Parker's movie of William Wharton’s novel Birdy. This Birdy trailer - which also brings back a horde of memories for me in the proverbial Proustian rush - is a showcase for some of Gabriel’s choice cuts and the imagery of the film to which they were terrifically matched.
As it happened, Alan Parker went on to do me a couple of great good turns in life which I won’t ever forget. Gabriel, meanwhile, has remained one of my absolute favourite artists. This weekend I note there’s a new release forthcoming from Gabriel and Real World – Big Blue Ball, essentially a record of some diverse and glorious jam sessions at Gabriel’s studio over various summers 15 or so years ago. I’ll be buying that one, then.
Posted by Richard T Kelly at 05:43:00 No comments: Links to this post 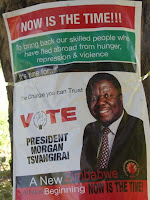 I guess I'm just among millions of people the world over this weekend, wishing all the harm in the world upon the awful Mugabe, his Zanu-PF mafia, and those goons of his who have been running around Zimbabwe this week advising citizens that a vote cast against the Chief will be the last thing they do on this earth. (Speaking of dictators: my bedtime hour was poisoned last night, having watched news pictures of that newly ordained Man of Peace Kim Jong-il, slouching across his imperial balcony in one of his tiny jumpsuits, so as to wave a fey hand at a parade in his honour somewhere beneath him...)
Zimbabwe, but. What is to be done? I've found myself recalling (you may too) that in the run-up to the Coalition invasion of Iraq some of the loudest voices in opposition sounded not so much opposed to regime change as desirous of setting the global agenda on same (i.e. why Saddam before Mugabe?) But let's assume that was just a minor element of a bigger rhetorical argument, and that no serious parties have the appetite, will or means for knocking Mugabe off his perch. On that note I can't quite bring myself to see what the right-wing press are saying at the moment, because rightly or wrongly I fear I'll have to read some nostalgia for Ian Smith and the Good Old Days. Thickening the moral soup on this point is a piece in the New Statesman by Mark Ashurst, director of the Africa Research Institute, and Gugulethu Moyo, a Zimbabwean lawyer. They write:
"The collapse of the post-colonial pact between Mugabe and his erstwhile enemies - the Rhodesian farmers, Britain, capitalism and Empire - has triggered a keen appetite for historical vindication among western critics. Mugabe's fiercest critics are often the same people who, in the early 1980s, turned a blind eye to the notorious "Gukurahundi" slaughter of 20,000 Ndebele loyal to his rival, the late Joshua Nkomo. But in Zimbabwe today there is not much appetite to indict Mugabe for human rights abuses - if only he would go quietly."
Well, he's not going quietly today. So what next? Timothy Garton Ash had a few suggestions in the Guardian yesterday: a new UN resolution, non-recognition of the results of today’s non-poll, no US/UK investment in a new Zimbabwean platinum mine, the rescinding of Mugabe’s honorary knighthood, a petition to Thabo Mbeki, attendance at a demonstration at Nelson Mandela's 90th birthday party in Hyde Park today - and good old sanctions, as once seemed to work in South Africa and Poland. Maybe throw into that a shot of red-blooded socialist solidarity, like the case I read highlighted by Christopher Hitchens in Slate of South African dockworkers who refused to unload a shipload of Chinese weapons bound for... guess where?
So, a few encouraging thoughts for a bad day, perhaps. Others in the London area can be more active in their expression and get along to Hyde Park.
Posted by Richard T Kelly at 01:07:00 No comments: Links to this post

Faber and Faber online in style 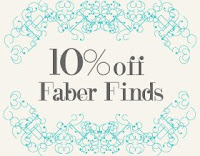 My esteemer publisher's brand-new and redesigned website is now available for public scrutiny, with lots for the browser to mull over and enjoy, including an exclusive Q&A with James Bradley, author of The Resurrectionist, which is a 'Summer Read' pick of the Richard & Judy show. There's info on the recently launched and much admired Faber Finds imprint whereby long-unavailable works of distinction are brought back into print. And currently there's a link to me and my stuff from the Authors page.
Posted by Richard T Kelly at 05:43:00 No comments: Links to this post 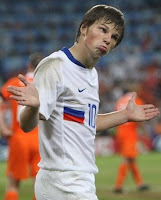 Per my previous thoughts on Euro 2008 - the Germany/Austria match the other week was probably the last we will see of Mario Gomez in this tournament. So does that shorten the odds of making a daft bid for him? In the Freddie Shepherd era, perhaps. But nobody knows quite what Mike Ashley wants to do with his money in these belt-tightening times. Much may depend on the charm and world-renowned acumen of Dennis Wise...
Belatedly, I learned that the Toon's crack scouts (or scouts on crack?) had been keeping an eye on Andrei Arshavin. But the Russian lad's own belated but bloody electrifying entrance to the tournament has been as good as a kick in the eye to any such pipe-dreams. As the fella on ITV said the other night, Alex Ferguson should take the £60 million he could get for Ronaldo and use about one-third of it on Arshavin.
Posted by Richard T Kelly at 07:26:00 No comments: Links to this post