I've long admired the writing of Chris Deerin, former political editor of the Daily Record, Head of Comment at the Telegraph Media Group, Scottish Daily Mail columnist, now at Oxford's Blavatnik School of Government. So this tweet of his from midweek came as a great boon to me, since it seems to find something to commend in each of the elements from which I compounded the novel:

Me, Esquire: Walking a mile in Mourinho's Pradas 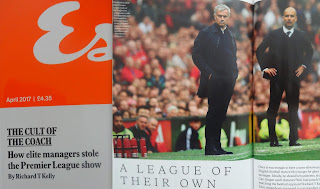 In the new Esquire I write at length on the subject of the superstar coaches currently scrapping away for the honour of leading their side to the Premier League title. To be honest, the scrap has a settled look – you have to expect Antonio Conte’s Chelsea to be champions. And, to be clear, I don’t especially care about any result in English football other than Newcastle United’s. But I’ve been enjoying the colour and ‘characterfulness’ of having all these big figures in English football. It’s also, as I say in the piece, a consequence of being an older fella with different sorts of identifications going on.

To me as for many, Pep Guardiola is a style icon, no argument – a model, for starters, in the correct address of male pattern baldness, from the luxuriant gleam of his shaven head to the impeccable tending of his stubble. Wardrobe-wise he goes mainly grey and black, as boys do, but his choices have fineness to them: close-fitting suits, the tie tucked into a cashmere v-neck or a button cardigan, topcoat accessorised with a chunky scarf.

I like the thinking aestheticism in Guardiola, too – the aura he derives from an umbilical link to arguably the coolest of all footballers, Johan Cruyff, who mentored him as a player at Barcelona. And I’ve marvelled a bit at his readiness to sideline Sergio Aguero, who has scored title-winning goals for City and would walk into any other side. So it saddens me a bit to have seen his refined approach beaten by some fairly backward English sides who favour hard tackles and long balls. This season Guardiola’s slight tendency to Rodin-Thinker-type poses has grown pronounced. His beard is suddenly greyer, and when his gleaming head goes down his eyes can appear very dark.

Not so Jurgen Klopp, who has shown himself to be refreshingly uninhibited in his fondness for a tall beer and a crafty cigarette. I was truly tickled to see Klopp asked at a press conference about the alcohol consumption of the modern player, the German replying rather ruefully that at Liverpool’s Christmas party he’d nearly had to force the beers down their necks of his boys.

So, yes, not so unalike, these superstar coaches and us.