Elaine May: Largely Unsung, Yet So Sing-able 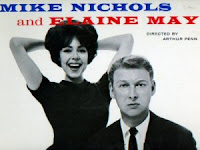 Back in the mid-1990s I worked a while at the British Film Institute on a number of documentaries about great filmmakers, and there I got to know many very talented and knowledgeable people, among them Mary Albert, a trained film editor who was also engaged part-time in a doctoral thesis on slow motion. So she and I used to have plenty of good chats about finessing matters of cinema, but I don’t think anything quite topped the day when we realised we were both avid fans of Elaine May’s Ishtar and – in the course of our animated conversation, and much to the consternation of the rest of the office – began to sing aloud snatches of the movie’s many musical numbers – ‘Telling the Truth Can Be Dangerous Business’, ‘The Lawnmower Song’, ‘Hot Fudge Love (Cherry Ripple Kisses)’ etc etc.
This is how we the anointed feel about Ishtar in particular, and May’s stuff in general. It would be more socio-culturally acceptable to say one were mainly a fan of the classic Nichols/May material c. 1950s/60s and, of course, The Heartbreak Kid (1972), which is probably rated as her greatest cinematic success. But for me you have to start out by defending the work that clearly served to terminate May’s directorial career, and not just on account of its commercial failure. If you read Peter Biskind’s recent biography of Warren Beatty you will be treated to the view – advanced chiefly by Ishtar’s genius production designer Richard Sylbert, but supported by significant others – that May ‘can’t direct.’ That's funny, and may be true on some level, but there really aren't that many movies I love more than Ishtar. I wrote the following in Ten Bad Dates with De Niro:

I like to imagine a parallel universe wherein May’s comedy is considered an endlessly quotable classic, hailed by the worthier critics for its accurate reflection of US foreign policy in the Middle East, MP3 files of its adeptly terrible songbook keenly swapped. None of that is ever going to happen on this planet; but such are the virtues discussed on rare occasions when two or more Ishtar fans are gathered. The rest of the world believes that May wasted Columbia’s money on some imbecile script allowing Dustin Hoffman and Warren Beatty to insult the audience as klutzy New York songwriters who dream of being Simon and Garfunkel. The duo wind up in Morocco, buffeted between leftist guerrilla Isabelle Adjani and CIA man Charles Grodin. This colossal commercial failure, funnily enough, is a heartening comedy about failure. Watch Beatty trying earnestly to talk Hoffman out of a suicide jump: ‘It takes a lotta nerve to have nothing at your age… Most guys would be ashamed. But you've got the guts to just say, ‘To hell with it.’ You say you’d rather have nothing than settle for less.’ The stricken look of dawning love on Hoffman’s face upon hearing this is worth your money alone.

A prominent member of the Elaine May Defence League is my pal Ryan Gilbey, first-rate film critic at the New Statesman. A few weeks ago I posted some YouTube clips of May on Facebook, just in a whimsical late-night spirit, but happily these prompted Ryan to devote an entire blog column to his May-love, which you can read here. One of Ryan’s specialist subjects is the ‘golden age’ of American moviemaking between, roughly speaking, Bonnie and Clyde and Raging Bull, and he places May adroitly in that moment, praising her ‘prickly sensibility’ as ‘consistent with the kind of downbeat, morally penetrating US cinema that was prevalent in the 1970s.’
If you don’t know her work, you’re wondering by now – is she actually funny? Decide for yourself. I shouldn’t say this but on YouTube you can watch the entirety of her wonderful A New Leaf (1971), which she not only directed but also shines in as a performer, playing – as Ryan thumbnails it – ‘a wealthy botanist earmarked for marriage and murder by a penniless former socialite (Walter Matthau).’
I also respectfully offer the following evidence. On the page, let’s start with her Vanity Fair Proust Questionnaire circa 2009. Turning to YouTube, let's have her tribute to Mike Nichols at an AFI Lifetime Achievement gala, one of the bits that got Ryan writing; her in her beautiful youth, cracking up the Emmys with Nichols in 1959; and some choice cuts from the opening reel of Ishtar.

I wrote a long piece for the Guardian that ran yesterday, on Mary Shelley’s Frankenstein, its context and legacy, and the new stage version at the National Theatre adapted by Nick Dear and directed by Danny Boyle.
The essay took up a healthy double-page spread in the paper, but obviously even with 2000 words to spare you end up cutting out a fair when you’re discussing a subject with this much, ahem, life in it.
In respect of what message(s) Frankenstein carries for the wisdom and ethics of scientific/medical exploration – naturally I would have liked to say a few words about Mary Shelley’s framing device of Robert Walton, the polar adventurer-navigator leading a full ship’s crew in search of the Northern Passage when, his way obstructed by ice, he alights upon a frostbitten man chasing a half-glimpsed giant across the arctic terrain...
Walton is seeking paradise, he dreams of conferring ‘inestimable benefit...on all mankind to the last generation, by discovering a passage near the pole...or by ascertaining the secret of the magnet’. Of course he is also endangering his crew. As such Victor Frankenstein is a man he ought to meet. They are two masculine loners, obsessed by their own brilliance and taken by surprise when their great trespasses redound upon them. Frankenstein has enough dearly-bought wisdom to tell Walton to learn from his example, to see ‘how dangerous is the acquirement of knowledge’, how wrong-headed is ‘he who aspires to become greater than his nature will allow.’
And yet at the death Frankenstein is back in dangerous self-delusion, excoriating Walton’s crew as they turn mutinous: ‘You were hereafter to be hailed as the benefactors of your species… And now, behold, with the first… mighty and terrific trial of your courage, you shrink away…’
Then his dying words: ‘I have myself been blasted in these hopes, yet another may succeed.’
So Frankenstein is seen to be in two minds as to how far and boldly a man should go in the spirit of discovery – and as I say in the piece I think Mary Shelley felt the same.
In his adaptation Nick Dear gets rid of Walton and starts proceedings fifty pages into Shelley. As he told me, he was very keen on the Walton material but found that it ‘didn’t get us swiftly into something that was meaty and bold.’ And the latter is how a play ought to be. Dear certainly does frame the debate for the audience through Victor’s refrain throughout the play: ‘We can only go forward. We can never go back.’ The ironies are there for us to mull over.
Nick Dear also offered some very interesting thoughts on the special challenge of adapting iconic often-done material: ‘I don’t really want to know what anyone else has done, ever’, he told me, saying that he hadn’t read any of the previous Frankenstein play-scripts. Danny Boyle was equally mindful of the cinematic heritage. According to Dear he first wrote his opening scene with ‘the creature lying horizontally on a slab, as in the movies. And one of Danny’s first notes was, ‘No, I want to have him upright on a frame, so it looks different...’
In respect of the movies: of course there is not a great deal of Mary Shelley in the famous Hollywood version of 1931, in which Boris Karloff – gaunt, hulking, square of skull, bolted at the neck but resolutely mute – sealed the iconography of Frankenstein (see below #1). Kenneth Branagh dug a ditch for himself by directing and starring in the 1994 movie entitled Mary Shelley’s Frankenstein, though his honourable try (even retaining the Walton figure) was gratuitously maligned, and had at least the virtue of a characteristically noble performance by Robert De Niro as the Creature (see below #2). Christopher Isherwood was bold enough to entitle his 1973 2-part television adaptation Frankenstein: The True Story, an amusing conceit given that Isherwood turns the tale into one of super-aesthetic homo-eroticism. I must say, though, that I’m a huge fan of Isherwood’s version, in which Michael Sarrazin is both movingly pitiable and ghoulishly malevolent (see below #3).
On that note, a last word from Nick Dear on one of his key departures from Shelley, namely the Creature’s realising of his chilling threat to be with Victor on his wedding night:
“... I thought, in a Victorian sense, [the creature] wreaking revenge on Victor Frankenstein by terrifying everybody and showing up and looking horrible might have been sufficient. But I suppose I was looking for ‘What’s the worst thing he can do to Victor, the really worst thing...?’