Philip Collins on The Knives (Times): 'Best political novel since Hollinghurst’s The Line of Beauty' 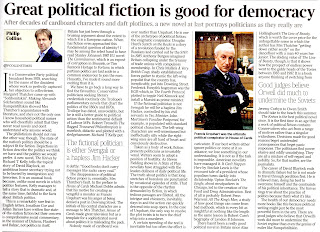 I count myself immensely fortunate to have provided a stimulus for this superb piece of writing by Philip Collins in today's Times on politics and the history of its depiction in the novel. His range is terrific, passionate and erudite, and I'm very much in sympathy with the thrust of his arguments, but honoured above all to be discussed approvingly in such company.

'A new novel, The Knives by Richard T Kelly, tells the topical story of David Blaylock, an ambitious home secretary trying not to be buried by immigration and terrorism. It is an unusual book because, unlike most novels in which politics features, Kelly manages to tell a story that is dramatic and, at the same time, faithful to the facts about British politics.This is a remarkably rare feat in English letters.'

I've had a lot of fine times in Edinburgh but this week's visit was the best, no doubt about it. Beautiful summer weather, for one, and it lasted until the morning of my departure when things took a turn back toward the dreich city we know and love. Above all, though, the events were fascinating, the company great, the sense of literary community hugely lively. The Festival Bookshop was even stocking my entire oeuvre, which I've never before seen all in one place outside of my bedroom.

My spot of Tuesday night chairing with Ian Rankin was great fun and surprisingly simple, just because Ian is a hugely assured and at-ease performer, with an audience of readers who are avidly interested in the minutiae of his work. In a world exclusive he read some manuscript pages from the forthcoming Rebus, Rather Be The Devil, which takes its title, to my delight, from John Martyn.

Wednesday was a huge engrossing morning, beginning with a special recording for BBC Radio 4's Open Book, a symposium on the novel, politics and our times, with my friend and fellow Faber novelist Ben Markovits, winner of this year's James Tait Black Prize for fiction; the Festival's hugely impressive director Nick Barley; our emcee Mariella Frostrup; the recent winner of the 'Arabic Booker' Raja Alem; and your correspondent. My thanks to Kirsten Locke, Nicola Holloway and Di Spiers at Open Book for inviting me. Do listen in this Sunday August 21, 1600.

And on Wednesday evening I shared an author event in the Spiegeltent with Mark Lawson, who spoke feelingly and with impressive candour about the personal experiences that shaped his recent novel The Allegations. I chatted away about The Knives, and found the capacity crowd very engaged and encouraging. To my joy a French gentleman in the crowd (himself a novelist, as he revealed to me in the signing tent later) asked me to expound about Dostoyevsky.

Mark and I had the benefit of being chaired by Val McDermid, literary royalty in the locality and elsewhere, and I was quite stunned by the generosity of how fastidiously Val had prepared for the discussion, taking great care in the choice of questions and conversational linkages. A star, for sure. 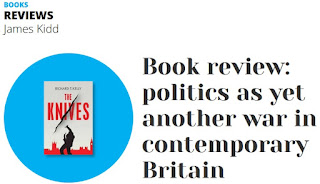 I'm really pleased by this write-up from the literary critic and journalist James Kidd that appeared today in the South China Morning Post. Couldn't be happier, for one, to be mentioned in the same breath as two of the major proponents of the popular novel of current affairs... But I'm also really gratified by the way James Kidd has synopsised the novel's plot - the elements he's drawn attention to, and his indication of why they might be there.

For example, it's terrific that this short but detailed review winds round to the following conclusion:

'The Knives rings bells on almost every page: anyone curious about Brexit might want to read about the 'Free Briton Brigade'. The end is a shocker and, tragically, only too believable.'
Posted by Richard T Kelly at 14:17:00 No comments: Links to this post 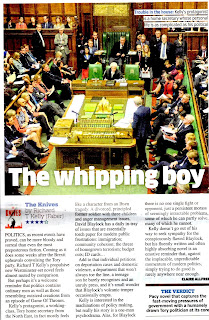 Claire Allfree is a literary reviewer who wrote a very thoughtful and welcome appreciation of my first novel Crusaders for London's Metro back in 2008. You remember these sorts of things, I can tell you.

I'm very pleased that Claire has now also written on The Knives and found this book to be of merit, too, in a 4-star write-up for the same paper - under what I have to say is a really top-notch headline for a piece on a Westminster novel: 'The Whipping Boy.'

These are the choice bits:

The Knives & me at Edinburgh Book Festival 2016 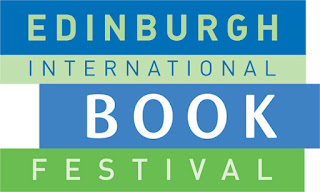 The 2016 edition of the Edinburgh International Book Festival is now afoot, and I’m calling in next week. It’s a brilliant festival that offers a splendid time for authors: the set-up in Charlotte Square is really handsome and well-organised, the team first-rate, the hospitality lovely, and they draw terrific crowds of curious book lovers. I’m very grateful to have had invitations to present all of my novels there, this year no exception – my thanks to the festival’s first-rate director Nick Barley.

I have a hand in three different events this time round:

On Tuesday night I will be handling emcee duties for Ian Rankin’s event framed round the paperback of his most recent Rebus bestseller, Even Dogs in the Wild. That’s from 8:15pm - 9:15pm in the Baillie Gifford Main Theatre.

On Wednesday morning I’m a guest for a special recording of BBC Radio 4’s Open Book with Mariella Frostrup, involving Nick Barley and the novelist Raja Alem. I’ll be delivering Open Book’s regular author’s column, a piece I’ve written specially on depictions of politicians in fiction. That’s from 10:00am - 11:00am, again in the Baillie Gifford.

On Wednesday evening I will be discussing The Knives, and Mark Lawson his new novel The Allegations, in an authors event chaired by Val McDermid. Mark’s book is a reflection on real events, and the Festival brochure asks: ‘With such sensitive social contexts involved, what personal risks did the authors take in approaching the material?’ That event is 7:00pm - 8:00pm in The Spiegeltent, tickets £8.00 or £6.00.

So maybe I’ll see you there, do say hello, et cetera.
Posted by Richard T Kelly at 05:19:00 No comments: Links to this post