Sean Penn et al give it back to Bill Clinton 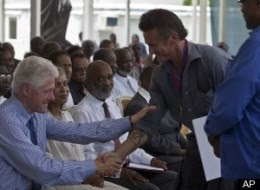 Hollywood, politics, and charitable work & donation: they certainly all do mix, whether or not you care for the theory and/or the practice. The Democrats, traditionally, have enjoyed the support of a classier, artier, wittier showbusiness crowd than have the GOP - in public, at least. The artistes who have come out in this video on behalf of ex-President Clinton's Foundation are comedic performers in the main, but there among them is Sean Penn, who has - to be fair - a certain amount of form in the knockabout tradition, and whose JP/HRO organisation for post-earthquake relief and reconstruction in Haiti have been generously assisted by the Foundation's purse. This is a fun 5 minutes, for sure. Those who recall Tony Blair's cameo in a 2007 Catherine Tate TV special may reflect that in the final comic pay-off Clinton exhibits a remarkably similar ease and apparent sense of timing in front of a camera, even alongside a professional and double-Oscar-winning mummer (not, in this instance, Sean...)