10 Bad Dates With De Niro: The Softcover is Nigh (US Only) 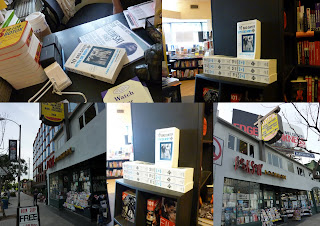 My brother, currently on loan to Los Angeles, CA, sends the photographic evidence (above) that Overlook Press have indeed unleashed a paperback of Ten Bad Dates With De Niro upon the famously fickle North American book-buying market. If it has already landed in LA's delightful and legendary Book Soup store then we are sitting pretty. Good luck to the little fella. I will rest my case for its merits on the verdict of Richard Schickel in the Los Angeles Times: "A stimulating, necessary volume - and virtually alone amongst cinematic studies in the wit of its arguments and the seductiveness of its style."
Posted by Richard T Kelly at 16:41:00 No comments: Links to this post

I'm proud to be a contributing editor to a men's-interests magazine that doesn't feel the need to chase circulation through cover shots of ephemeral girly models in their scanties. No sir, when Esquire does feel the urge to put a beauteous woman up on its front, they always do so with plenty class: to wit, the quite stupendous image of actress Rachel Weisz by Greg Williams (left) that adorns the new issue. (Weisz is interviewed within by my mate Nev Pierce. Elsewhere the 'Rachel Cooke Interview', which a few months back was with Tony Blair, is this month with Peter Mandelson. Rachel Cooke gets some lovely gigs. As does Nev.)
I met Rachel Weisz once, in 1995, on the location (just outside Siena) of Bernardo Bertolucci's Stealing Beauty. With the rest of the cast and crew she was hanging out somewhat languidly in the Tuscan villa that was the movie's chief location - waiting for the Muse of the Next Set-up to descend on Bernardo and his DoP. In particular, she was hanging out with Liv Tyler, with whom she seemed to have as nice a rapport as they were meant to have in the movie (where Weisz played the sexually experienced young female to Tyler's over-ripe virgin.) As in that movie, Tyler in the flesh looked marginally more like the Hollywood movie star (at least to my gauche eye), and Weisz slightly more like the smart/gifted product of a Hampstead upbringing and a Cambridge education. Ms Tyler has done very well since, of course, but Weisz has really shot the works, with Hollywood franchise hits and an Academy Award. Now, apparently, she's polled as the woman most Esquire readers would like to marry - which, based on her CV and that cover shot, is setting the bar rather high.
Oh yes, my film column this month is on the film of Cormac McCarthy's The Road, of which I say:
"Post-apocalypse movies tend to excel in the poignantly desecrated landmark, and ever since Planet of the Apes Hollywood has routinely knocked the head off the Statue of Liberty. The beauty of The Road lies in the melancholy of an abandoned freeway bridge, a mighty and improving work of mankind turned to a reproach now that civilisation has receded. Across that bridge Man and Boy trudge, toward a jack-knifed eighteen-wheel truck; and ‘round the decay of that colossal wreck’, as the poet wrote, desolation stretches far away..."
Posted by Richard T Kelly at 14:43:00 No comments: Links to this post

You'll have noticed I do, for my sins, take seriously any regard that's exhibited for my stuff out there in Blogville; also that I have an amateur interest in the art of top tens anyway... so I'm pleased to see Crusaders on another personal-best-read-of-2009 list, this one from blogger Nick Lacey (scroll down), where I'm in the esteemed company of Misha Glenny, Joe Sacco, Anne Tyler et al. Better yet, since David Peace and The Unthanks (pictured) rank high in Mr Lacey's 'Film' and 'Music' lists too, then I get the additional warm feeling of being part of a certain culture that's rattling around out there somewhere...
Posted by Richard T Kelly at 14:21:00 No comments: Links to this post

The Robinsons: Paint an Inch Thick

Mulling the possible fall-out of the Peter & Iris Robinson Debacle on Newsnight last week, scholar Paul (Lord) Bew warned viewers to be aware first of all that ‘there is no-one to the left of Peter Robinson in the DUP.’ Now, there’s a thought to make you gulp: Bew is right, of course, and it’s been that way for a while, and yet the plain statement of the truth does chill the blood somewhat. (The excellent David McKittrick summarises the state of things well in today’s Independent.)
The abrupt termination of Iris Robinson’s ludicrous political career is, of course, to be warmly welcomed. One always assumed that she was a contemptible hypocrite, but never that she would end up trumpeting the fact to us all with such fanfare. No further attempt on her part to show off the contortions of her Protestant conscience could afford her the slightest pathos – truly this is the sort of woman (cf. Wilde) whose hair would turn quite gold from grief. But she had a good run, absolutely maximised her limited abilities in life, and was able to carry on in the grandest manner. Now, as Hamlet instructs Yorick’s skull, ‘Get you to my lady's chamber, and tell her, let her paint an inch thick, to this favour she must come; make her laugh at that.’
What of ‘Peter’, as McKittrick calls him with, one assumes, some sort of friendly regard? He looks to be on the out, for sure. He appeared red-eyed on television the other day, though his legendarily pinched and sour persona of the 1980s and 1990s makes him another hard fellow to feel sorry for. 'In all of my public life', he insists, 'I have acted in the most professional and ethical way.' That goddamned self-advertising Protestant conscience again. Says who, Peter?
I will always remember him as the would-be DUP autocrat trapped in the mountainous shadow of Ian Paisley: a chap with a decent mind who nonetheless affected a trench coat and tinted glasses, a nerd trying to be a thug, as when, notoriously, in 1986, he led a Loyalist mob to the little Monaghan town of Clontibret, in protest at the Anglo-Irish Agreement. What idea of Ulster those eejits thought they were upholding by breaking windows and daubing graffiti on schools, the Lord only knows, but Robinson watched over the cudgel wielders and pronounced that this was Good. His subsequent attempts to squirm out of the legal consequences of his actions ought to have been the moment he learned to stop acting the tough guy.
The funniest twist in Robinson’s career was his adoption c. 1990s of a spiked, moussed hair-do, this coiffure perched above a pasty face that has always seemed about as cheerful as a kicked-in fridge door. Clearly Iris was urging him to play his proper part in the power couple they had become. And yet in the big stakes game it seemed Peter could never usurp Big Ian. Rather like Prince Charles, you might say, he aged and wearied and grew stale in the long wait to succeed. And yet, materially he prospered, his well-upholstered little empire in Castlereagh expanding indefatigably, with Iris ordering in the fancy curtains.
Moreover, as the mid-90s ‘peace process’ trained a new international spotlight on Northern Ireland Robinson proved himself to possess a decent set of political smarts, to be able to master a brief, exhibit a forensic mastery of detail. In his entirely auto-didactic way he was more impressive than the condescending ex-law lecturer David Trimble.
As Trimble’s UUP fell apart, Robinson’s utterly strange party gained, and Paisley's authority waned - Robinson himself seemed a bit more sensible, a bit more likeable, and distinctly atypical of that party of his. As he said in 2001, ‘Unless we have a structure that can enjoy the support of unionists and nationalists alike, it is not going to last.’ This observation remains true, and Robinson came round to it quicker than some of the other aspirant stormtroopers on his side. But if he’s now about to exit the field, then Paul Bew’s observation is the ominously correct one.
Posted by Richard T Kelly at 05:51:00 1 comment: Links to this post