Ashamed to Show Oneself: Beauties & Beasts 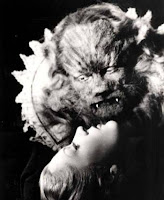 Yes, Darling Daughter's most recent Disney crush is the rambunctious Beauty and the Beast, and she seems as charmed by it as any of the more obvious Pretty Princess-oriented titles in the Walt canon - which would be a surprise only if one expected a Disney Beast to be genuinely scary, or properly melancholic.
The Disney version clearly owes a visual/poetic debt of sorts to Jean Cocteau's imperishable film of 1946, throughout the making of which Cocteau was tortured by impetigo, eczema, and assorted carbuncles that made him want to hide in the shadows - a punishing and yet fitting mindset for the work he had before him.
Disney stole a few decent strokes from Cocteau but needless to say they jettisoned Cocteau's crowning irony, namely that the restored Prince, in the preening form of Jean Marais, seemed a poor substitute even in Belle's eyes for the majestic, sad, wounded Beast (i.e. Marais under layers of furry make-up.)
What really marks the Disney film as a work of 1991 is how it goes merrily overboard in depicting Belle's boorish and spurned village suitor Gaston as a macho moron (who duly plummets to his death in standard Disney Villain fashion) - whereas the Beast learns how to be an absolute sweetheart, just in time for his revision to human form. John Wayne would not have approved. But then this was the early 1990s, and there was a certain vogue for masculine sensitivity: as John Buffalo Mailer evokes the era to his father Norman in the rambunctious dialogue book The Big Empty, 'Political correctness was at its height and the sensitive ponytailed guy was getting laid more than he should...'
Posted by Richard T Kelly at 09:13:00 No comments: Links to this post

Ever since he took charge, and especially so as hope has dwindled, Alan Shearer has talked a first-rate game about what his team needed to do, indeed ought to do, to save themselves. And if only his starting XI could have performed in anything like the same spirit then Newcastle would have pulled themselves out of the hole they're in prior to today's final horror-show. Alas, it remains the case that Newcastle are one of the three worst teams in the top division over this season, and so deserve to go down however it plays out over 'Super Sunday'.
Bagging the extraordinary luck of a combination of results sufficient to squeak past Hull or Sunderland - both of whom beat NUFC on their own turf, and whom NUFC failed to beat at SJP - is in itself a fairly rancid karmic outcome, however avidly all Mags would seize upon it. But in any case NUFC go into this game without their two best, most consistent players, Beye and Bassong; with two strikers fettled and a third playing on one leg; and without a shred of pace or creativity in midfield. They go to 5th-placed Villa, a quality side, well-managed, keen to finish on a high. And you reckon NUFC are going to play their hearts out, defend like giants, nab one on the break and generally exhibit all the attributes missing ever since Keegan walked early last September? Gerraway, man. Sorrowfully I have to say I can't see how it's conceivable to imagine them doing anything of the sort.
So the crisis continues, rather than starting today, and only enormous structural remedies can begin to address it as of this summer. The ever-staunch NUFC.com have offered the following advice to fans as and when the axe has finally fallen this evening:
"Please do yourself and your club a favour and make sure the Sky cameras don't catch you snivelling into your scarf or blubbering into your best mate's shoulder. Show some dignity and don't bring this club into disrepute. We suggest you turn your back and make a hasty retreat for the exits. Once outside, walk straight past reporters and cameras in the streets and maintain your silence until you are well away from prying lenses."
Sounds like the sort of thing Shearer would say, if he accepted we were as far gone as everybody else believes. Not daft, though, our Alan. I trust he'll have his own dignified face prepared.
Howay the Lads! No shame in the Second Division, man, we've seen it all before, and the only way out of it is to play better.
Posted by Richard T Kelly at 04:11:00 No comments: Links to this post