Zoe Tapper, Jennifer's esteemed female lead, has a deservedly large and devoted following out there, and of course there are dedicated websites that track the progress of her career. I see that one such, zoetapper.net, has noticed my last post and added a few lines on Jennifer among their listing of Zoe’s current projects. They must have checked out my other Jennifer-related postings on here and, not unreasonably, took away the notion that Zoe might be playing the late Jennifer Jones in the film. I ought to confirm, then, that Jennifer is not a Hollywood true story but an entirely fictional tale, set in present-day London. One doesn’t want to spill too much about the plot; however it’s simple enough to reiterate that for me the titling of Jennifer was a sort of cinephile tip of the hat to William Dieterle’s Portrait of Jennie (1948) and to Jennifer Jones’ luminous performance therein. But really that amounts to nothing more than a little movie-lover’s in-joke – you’d never suppose the connection from watching the film, even if you know the Dieterle picture inside out.
What’s for sure, though, is that Jennifer borrows (or steals…) some of the thematics of a certain family of Romantic film stories – Jennie being one, but Hitchcock’s Vertigo (with Kim Novak, pictured) undoubtedly the most admired – in which female beauty is shown to exert a near-mesmeric hold over a man, and could even, in a certain light, be imagined to derive from some supernatural origin. (I’m sure all fans of Zoe Tapper will have no difficulty envisaging her in just such a role.) There is a great Romantic line uttered by Jones in Jennie that could also, in my idle fancy, adorn some imaginary poster for Jennifer: ‘Of all the people who lived from world’s end to world’s end, there is just one you must love, and you must seek until you find him...’ (or, in this case, her.) But of course there are two ways to take such a sentiment: one as proof of a towering, heartfelt, quasi-religious love, the other as evidence of a disturbed mind...
Posted by Richard T Kelly at 03:07:00 No comments: Links to this post

On location with 'Jennifer' 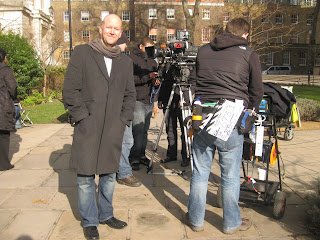 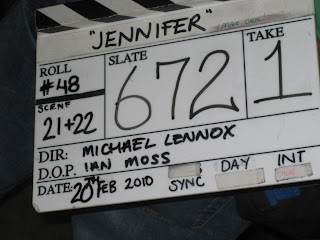 ‘How do you like your 'Jennifer'?’ Thus did director Michael Lennox greet me shortly after I stepped onto his set for the first time, this on the final day of the Channel 4/Touchpaper TV ‘Coming Up’ shoot, based at a centre for student medics within King’s College, London. Mike might have been referring to the industrious hum of activity all around the location, or simply to the immaculately dark and beguiling manner in which Hair & Make-Up had prepped actress Zoe Tapper for her day’s graft in the role of the film’s titular heroine. At any rate, ‘Very much’ was my feeling either way.
Of course I can’t really envisage how Jennifer will look and feel and function once it’s all cut into shape (though I’ll find out soon enough...) But what I saw on the shoot was hugely heart-lifting and compelling, thanks to the commitment and cares of Mike and his producers and crew, and to the work in front of camera by Zoe Tapper and Andrew Buchan, stupendously gifted young professionals whose combined presence and calibre have given a huge boon to this project. Observing Andrew’s and Zoe’s easy, astute shifts into and through the gears of performance, the well-turned smartness of their acting choices from moment to moment - it was easy for me to forget that I had scripted this drama. The only moments that pulled me out of this agreeable reverie were the occasions when it was clear I’d written some line that was not really sayable, or some piece of business that actually served no purpose.
I’ve been on enough film sets before as an observer, but this was my first time watching something I’d written get raised up onto its feet and shot. Once one’s head is screwed on thus, it’s fascinating to watch a crew, get the feel of its unique division of labour, and the lively personalities inhabiting the various specialisations. I’ll say this for starters: film crews always have the best active-wear jackets, combat trews and boots, not to speak of those techie tool-belts bristling with gear and lucky charms. Where do they shop for this stuff? Moreover: film crews still seem to chomp through cigarettes more (or more vigorously) than any other profession I know - this periodicy somewhat dictated by the incidence through the working day of clouds across the sun or droning aeroplanes overhead. The crew’s rhythms are many and various, but the chief one comes after ‘Action’, when a lot of diverse activity swiftly resolves itself then falls still, and 40-odd pairs of eyes are suddenly trained on a 15-inch monitor. But then that’s where the action is.
Anyhow, more on Jennifer to come, de rigueur...
Posted by Richard T Kelly at 16:50:00 No comments: Links to this post