Osborne's narrow choices, and ours

I look at David Cameron and see someone who strikes me as passable. This is mainly – and, I concede, a tad worryingly – on account of his dignified, principled bearing on occasions when he has handled matters related to HM Armed Forces: most strikingly, the findings of the Bloody Sunday Inquiry and, last week, the issue of deployment of British forces over Libya to enforce UN 1973.
The Libya question, it’s been widely noted, proposes more strongly than ever that Cameron is the ‘heir to Blair’. – a perilous mantle to hold, but you would count on Cameron not to be fazed by it. Even now one hears familiar critiques of his character – that he is a glib and shallow PR man, an aloof and pampered toff, merely Thatcher’s bastard offspring, i.e. one of the ‘same old Tories’, to use the lumbering terms of Labour’s current and hopeless leader. At times it seems to me that observers might as well resort to the analytical method of Harry and Paul’s old club buffers in this celebrated sketch.

Of course, Cameron is patently not a politician who could have been slotted (even by time machine) into one of Thatcher’s 1980s cabinets; and while he is undoubtedly several leagues more posh than me he looks (from my myopia-ridden remove) to be one who mixes well and without condescension (other than in his ripostes to the aforementioned Hopeless Labour Leader, who doesn’t even ‘speak human’ on what I’ve heard, for all that his fan club boasted otherwise those 7 long months ago.)
What does Cameron believe in? To quote from Nicolas Roeg’s Eureka, I think ‘he believes in himself.’ That, too, can be dangerous, a vulnerably Blair-esque distinction. But it certainly suggests someone who will not run into any of the nervous-wreck hazards of leadership, i.e. unlike the excruciating personal style of the now-invisible man whom Cameron replaced.
Approving Cameron to that degree, I find it easier to speak of all the things that are disagreeable about George Osborne, whom I doubt mixes well at all and, worse (as Martin Kettle argues here) seems to be trapped in some hellish mirror-image homage to the wiles of Gordon Brown. John Rentoul did no messing in describing Osborne's Budget speech of yesterday as “the most appallingly crafted, third-rate peroration of any parliamentary set piece I have had the misfortune to witness.”
You can probably trust the view of a Tory who trashes the first routinely scheduled Budget of a Conservative chancellor in 14 years: thus Fraser Nelson, today poring over the Office for Budget Responsibility's report, seeing no authentic pro-growth measures, only creeping inflation, steadily ahead of wages, until possibly mid-2013. (“Result: real wage falls, real drop in living standards and real misery.”) Nelson is avowedly a hardcore tax-cutter and deficit-slasher, believing too that the former aids the latter, and he criticises Osborne for insufficient zeal on the controversial issue of The Cuts (“In 2011-12, the estimated bill for debt interest will be £48.6 billion — a staggering £4.7 billion more than the estimate in the November forecast.”) This may be in part why John Rentoul, however scornful of Osborne's presentation, concludes that “overall, the Cameron-Osborne judgement on public finances seems more right than the Miliband-Balls one, so far as that can be defined.” Or as Martin Wolf puts it in the FT, "The UK is caught between a chancellor who insists his policies are perfect now and a shadow chancellor, Ed Balls, who insists that policy was perfect under Labour" - or, at least, Labour under the glorious leadership of Balls' padrone, Brown.
This week Rentoul quoted with permission a plaintive letter he'd had from one Darren Canning, a Labour member and campaigner:
“I keep hearing how a new generation is in charge of Labour now and keep wondering if there is any place left in it for me... All we have had to say is ‘Vote for us, we’re not Tories.’ It isn’t enough to get excited about... I am pulling out of active campaigning and am seriously thinking of leaving the party altogether. At least then I will be free to defend the last 13 years without constantly being accused of being ‘disloyal’. I am writing to you asking for counsel, is there a place for those who still value the New Labour project in this new Labour party or is it time to take a break?”
On one level you have to say, tough-mindedly, that there is no point whining about where Labour's internal convulsions have taken it, because it's hardly unprecedented, and there's hardly anywhere else to go. But to sound a tad less brusque - I do approve the Canning analysis.
Posted by Richard T Kelly at 15:15:00 No comments: Links to this post

This rather feels like some weird form of autogenesis, but I'd like to point readers to some recent posts on My Other Two Blogs... Over at Faber Finds I've been especially enthused in relation to William Sansom and James Baldwin, and at the Doctor Forrest platform I've had a few things to say about Egon Schiele, William Hjortsberg, Bela Bartok, Alice Krige (pictured) and Sir Arthur Conan Doyle. (What a dinner party that would be, no...?)
Posted by Richard T Kelly at 10:07:00 No comments: Links to this post 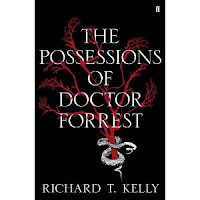 In case it ever be mooted that I invented the show of support given me by Stylist, of which I blogged a little while ago - well, here is the proof. 'The Chilling Read of the Year', mate. Black and white. I'm pleased to say there have been some other subsequent votes of confidence in the book, and I look forward to taking the wraps off these shortly...
Posted by Richard T Kelly at 09:58:00 No comments: Links to this post