'No tears in baseball!' 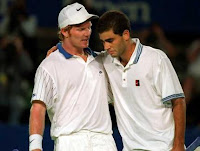 My monthly Bookhugger column will resume next week after a short and unplanned winter break, and I’ll be writing about a fascinating biography of the former Australian cricket captain Kim Hughes: a dashing batsman in his day but, sadly, remembered more for the tears he shed at the press conference where he resigned the captaincy after his team took a pasting off the invincible West Indies side of 1984.
Boys don’t cry, as they say generally, and I guess Australian boys in particular are made to fear reprisals and eternal scorn should they succumb, not least when the matter in hand is sport. It’s a mite more acceptable/manly, I think, to shed a small tear in victory than in defeat – even to let go with the full waterworks, like Alex ‘Hurricane’ Higgins after the 1982 world snooker final. Or if, say, some staunch veteran colleague is hanging up his boots or hearing his last hurrah – in which case a fella on the field or in the stands could be permitted to look a little dewy round the eyes. But the idea that as a brawny sort of a sportsman you might be really and truly upset about something bad that’s happened... Jesus mate, you might as well walk yourself round to the Ladies’ Room for a session with the powder-puff, before your comrades or the team’s supporters drive you there with burning torches.
One alleged exception to this rule is Paul Gascoigne, whose desperate, blinking, red-eyed blubbing following his yellow card in the semi-final of Italia 1990 was widely felt to speak for the feelings of England fans as they contemplated a quite colossal disappointment.
For me the most utterly wrenching instance of a sportsman’s visible distress is without doubt Pete Sampras’s wracked effort to play the fifth set of his 1995 Australian Open quarter-final against Jim Courier, the tears streaming down his face even as he prepared to serve. His coach Tim Gullikson had been diagnosed with four separate brain tumours that week, and Sampras had been running daily between the tournament venue and the hospital. In the match, having gone two sets down he fought back to level, whereupon some airhead in the crowd thought it a considerate exhortation to yell, ‘Come on Pete, do it for your coach...’
The story is told in the documentary excerpt below, and watching Sampras wrestle with it , even now, is highly affecting. The highest level of individual sport is a lonely, intense, super-concentrated universe with scarcely an inch of space for error of weakness. I had though Sampras overpoweringly dull, if brilliant, as a player, and so hardly thought of him as a person, but post-1995 I became his keenest fan, the revelation of his deep feeling helping me belatedly to see him as the supreme athlete and competitor he undoubtedly was.