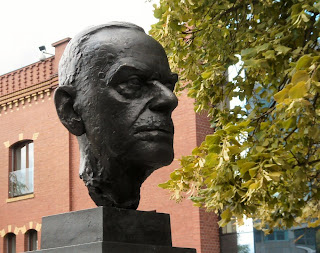 Which bit of formidable sculpture would win in a fight, do you think? Paolozzi's Tyneside 'Vulcan' as glimpsed here in one of last week's entries? Or Herr Thomas Mann, as immortalised in this thumping great Berlin bust? I'm in a favourite-writers mood, see, and harking on Mishima as below reminded me of one to whom Mishima bent the knee. Again, the length of the average novel may have been a consideration here: Buddenbrooks, The Magic Mountain, and Joseph And His Brothers all have great capacity to them... My favourite of Mann's productions is the magisterial Doctor Faustus, and when I get round to constituting a proper Recommendations element to this blog I shall say more about why.
Posted by Richard T Kelly at 10:10:00 No comments: Links to this post

...is a name in the blogosphere that has started to crop up in my field of vision with increasing regularity: a Devonshire "bookaholic"/community nurse, who runs a very diligent and involving blog on what she's reading, i.e. seemingly just about every bit of fiction that's being published into bookstores. She posted the following in respect of Crusaders, and I have to say I'm very glad of the courtesy and consideration shown. Even had she been less keen on the novel... I hope I would still have had the courtesy in return to say: books and reading clearly need more advocates of her sort out there. 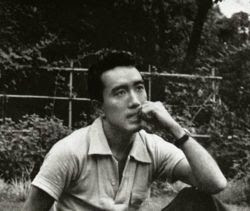 It's not just the snowfall of early April that has started me thinking of Yukio Mishima again lately. It's also something to do with very long novels, and with the idea of reincarnation too... Plus some dark thoughts about one's level of physical fitness, and general tendency toward torpor... And also the issue of how thoroughly busy one ought to be as a writer. Mishima never really stopped working - until, that is, he stopped - and in about as appalling a manner as one could envisage. The photo herewith depicts the pre-iron Mishima of course - dreaming perchance of the rather leathery muscle-Mary he would become? Anyhow, Googling about to remind myself of some of the content of Mishima's short stories I found this thoroughgoing response to the Sea of Fertility tetralogy, which I'm aiming to re-read this year, images from which have stayed in my mental furniture ever since I first picked up that huge volume back in 1988. So I still think of it as my favourite of his, if not for After the Banquet, which I wasn't so keen on as an adolescent but have come to regard more highly over the years in which my interest in sexual perversity has, simultaneously and thankfully, receded.
Posted by Richard T Kelly at 15:10:00 No comments: Links to this post

Memory lane... reading the just-published 'news novel' Born Yesterday by Gordon Burn has brought back the summer of 2007 to me in all its dank, rain-steeped misery. As sorry forecasts of a warm but wet July/August 08 start to surface, a good time then to recall the baking-hot cold-beer World Cup summer of 2006. For me that was all about the slow return to supreme form - and the sudden exit pitch-left - of the player in white seen in the photo montage above (this by premasagar on Flickr.) I wrote about this and other aspects of the great Zizou in an essay you can read here from Sight & Sound, prompted by the art-movie Zidane - A 21st Century Portrait. The Guardian today reports that lucky Australians will get a rare glimpse of him back in action June 1.
Posted by Richard T Kelly at 15:48:00 No comments: Links to this post