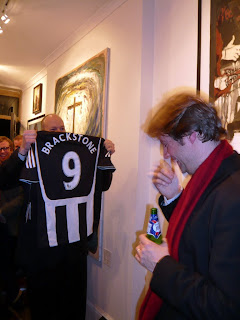 Following this here link will take you to the site of the estimable New Writing North, specifically their Multimedia page, whereupon you will find a downloadable podcast of a Crusaders platform event held at Newcastle's Live Theatre (Broad Chare, Quayside NE1) on Wednesday March 5 2008. (Alternatively the direct link to the podcast is here.)
I was In Conversation about the book and its background with NWN's terrific director Claire Malcolm and also my Faber editor Lee Brackstone. But I have to say the chief appeal of this audio-nugget is a selection of dramatised bits from Crusaders that were marshalled by Live's artistic director Max Roberts of Live (the first voice you'll hear on the file) and performed by some totally top-drawer North-East actors, including Trevor Fox (as John Gore), Tracy Whitwell (as Lindy Clark), and Deka Walmsley (as Martin Pallister and others...).
The picture to the left, meanwhile, is of myself and the aforementioned Brackstone, between us the customary small token of authorial gratitude that I bestowed upon him at the London launch party for Crusaders. Lee is a West Ham man, but I consider him one of life's centre-forwards, and certainly fit to fill the Shirt of Legends as shown. My understanding, though, is that he'll be framing it rather than wearing it...
Posted by Richard T Kelly at 07:07:00 No comments: Links to this post

At a seminar on blogging a novice speaks, falteringly...

Crusaders in the papers

In advance of some terrifyingly slick multimedia stuff that I'm about to post up here about Crusaders, I'd like to quickly pay my respects (and direct browsers) to some old-fashioned write-ups that appeared in the newspapers and journals and were gratefully received by this author: from Joel Rickett in the Independent on Sunday, Adrian Turpin in the Financial Times, Andrew Holgate in the Sunday Times, John Gray in the Independent, Stuart Kelly in Scotland on Sunday, and Sean O'Brien in the Times Literary Supplement. There were also interesting notices in the New Statesman and the Guardian. And from the blogosphere and elsewhere I was very glad of these reviews from Bookmunch and the novelist Susan Hill.
Posted by Richard T Kelly at 06:38:00 No comments: Links to this post 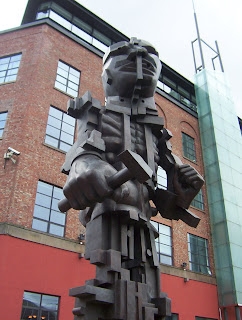 It seems needful to have a photo of someone/something other than myself on this nascent blog - and I can't immediately think of anything finer than the bruising 7-foot bronze that stands on a spot not far south of Newcastle Central Station. It's hard to imagine a time when a piece of sculpture/statuary located conspicuously in the North East won't have some sort of (post-) industrial connotation. But to my eye the 'Vulcan' has always looked like he still knows how to use his hammer...
Posted by Richard T Kelly at 14:53:00 No comments: Links to this post

Just to step aside for one minute - were you there at White Hart Lane, on the day when the sun finally came out, the net got bursted, and Keegan gave us a wave? I was, in the company of the top-drawer NUFC chronicler who recorded proceedings in the following (unimprovable) fashion.
http://www.nufc.com/2007-08html/2008-03-30spurs-a.html
Posted by Richard T Kelly at 08:26:00 No comments: Links to this post

For Web-archival purposes i.e. before I forget that I ever wrote it, below is a link to the Diary column I did for the New Statesman in the week (January 17 2008) that Crusaders was published. Obviously the set of subject areas I chose to dwell on was not an accident...
http://www.newstatesman.com/200801170007
Posted by Richard T Kelly at 08:18:00 No comments: Links to this post

Moving on... for all proper cinema fans I'd just like to recommend the site http://filminfocus.com/ to which I contribute various bits, including an essay on Ian McEwan (the following gobbet from which just occurred to me for some reason...)
"If there is a recurrent scene in McEwan it is the sudden appearance of evil, pain or death – dreadful things that ought not to happen, but do – in the lives of solid and unsuspecting bourgeois people..."
Posted by Richard T Kelly at 07:55:00 No comments: Links to this post

I'm the author of a novel entitled Crusaders, and of a number of books about filmmakers and filmmaking (among them the authorised biography Sean Penn: His Life and Times.) Recently my publisher Faber and Faber asked me to answer 10 questions about writing and writers for the use of http://www.faber.co.uk/. I'm supposing they saw this questionnaire as a simple way for authors like myself to greet readers within their site; so it seems a fair way for me to say hello on this one. Starting at the top...

1. I work best when... I’m meant to be doing something else, the mind on other matters. Sad to say, one doesn’t always have a pen to hand at these times.

2. I wish I’d written... inter alia, All the King’s Men by Robert Penn Warren, since it raises the dirty game of politics to the level of myth, and within that subject-field I can’t see how it could be bettered.

3. If I wasn’t a writer I would... be really stuck. But, needs must, and in mid-life I’m taking more of an interest in plumbing, plastering, carpentry, and other callings I wish I’d been more curious about back when I was a shiftless adolescent.

4. The most underrated writer is... the diversiform figure of Norman Mailer. His recent passing brought forth a lot of fine tributes, but for some years previous his work had suffered from a very tired and narrow reception. I started out writing ‘oral history’ biographies in homage to Peter Manso’s Mailer: His Life and Times – which I’d read because I loved The Executioner’s Song and Armies of the Night, and needed to know more about their maker. And this was before Mailer had written Harlot’s Ghost or Oswald’s Tale or The Castle in the Forest… So I didn’t know I was born, as they say.

5. My favourite short story is... Conrad’s The Secret Sharer.

6. The most romantic piece of writing I’ve ever read is... the realisation of love between Sonia and Raskolnikov at the end of Crime and Punishment.

7. My favourite bookshop is... for auld lang syne, the Queen’s University Bookshop in Belfast. That’s where I used to go as a novice reader of Good Books, and I met a great guy working there called Joe McMeekin, who helped me along.

8. If I listen to music when I write I usually put on... something that feels vaguely sympathetic to whatever it is I’m trying to hash out. Lately this has included Dylan’s three ‘Christian’ albums, and Schoenberg’s Erwartung. When the writing’s coming out rubbish I just stop and put on Led Zeppelin like any other sane being.

9. I am kept awake at night by... vaporously dark thoughts that condense into a black pool on the bedroom ceiling. You too, right?

10. If I could go back in time I would... set the controls for Berlin 1919 and do whatever I could to help out Rosa Luxembourg.
Posted by Richard T Kelly at 07:05:00 No comments: Links to this post