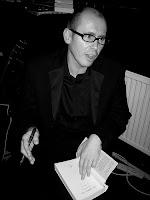 The Story Engine is an annual forum (founded by filmmaker Ian Fenton in collaboration with New Writing North) where British screenwriters and filmmakers convene in Newcastle to discuss their work and working methods. This year’s focus is on crime fiction – genre’s conventions, creative choices within those, adaptation from book to film. Story Engine: Scene Of The Crime takes place at the Tyneside Cinema on Friday 11th and Saturday 12th of March. Scheduled for the Saturday at 11am is a session entitled THE BLOODY NORTH, where the brochure promises that Mike Hodges and David Peace will “explore the importance of place within the genre and discuss the problems of mixing fact and fiction.” (It further proposes that Peace’s celebrated Red Riding Quartet “lies squarely in the shadow of Hodges’ Get Carter.”)
I tell you all this because I’ll be the chairperson of this Peace-Hodges symposium, which will be a considerable pleasure for me as well as an interesting listen, I expect. There’s little I need say myself about Get Carter (though I do always like to remind people that it marked the memorable screen debut of the Pelaw Hussars Juvenile Jazz Band.) But I can’t wait to hear what Mike Hodges will say of it, looking back nearly 40 years to his masterpiece. I’m extremely keen to know what David Peace will think of it too. And then what will Hodges make of the TV version of Peace’s Red Riding, which was widely felt to be as strong a piece of British ‘cinema’ as these shores have produced in years? (I remember Nicolas Roeg marvelling to me about the James Marsh-directed 1980 episode in particular, wondering also why we’re not allowed to be so stylistically bold in movies anymore. I remember Paddy Considine enthusing to me, not long after 1980 was in the can, about the joyous experience he’d had on the production. I drop these names really because Considine and Roeg are, I think, the last two people I interviewed on stage, in November 2008 and August 2009 respectively. I used to do more of this stuff, actually, but I’m always happy to turn my hand to it, and am also available for children’s parties.
Two clips: Red Riding in US trailer form because it shows just how forcefully this package was assembled from a modern genre perspective. And the ageless , glorious beginning of Get Carter – because that’ll be me in a week’s time, see – on the train from London to Newcastle, the finest of all journeys, and one to which I paid homage in the opening chapter of Crusaders...

"A serious house on serious earth" I recommend Bruges (where Darling Wife & I just passed a very happy weekend) to anyone. Lovely hotels, fine museums and architecture, a pretty canal, great food and drink, and not one melancholy Irish assassin to be seen. To itemise the highlights? Well, I might speak of the Church of Our Lady (Onze-Lieve-Vrouwekerk) with its glorious marble Madonna and Child by Michelangelo, its rococo pulpit by Jan Antoon Garemijn, its bronze tomb sculpture of Mary of Burgundy, and the boxed-up stained-glass of George and the dragon (beside which an old geezer poses above…) But then whenever I wander round a really great old church, as was our pleasure in Bruges, I do always find myself wondering what finer thoughts Alan Bennett would be having were he in my shoes...
Posted by Richard T Kelly at 17:04:00 No comments: Links to this post 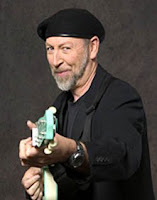 I have been reading, with much interest, the estimable Greil Marcus’s Bob Dylan: Writings 1968-2010. On the cover is a quote from the San Francisco Chronicle – ‘Why read anyone else’s work on Dylan?’ Well, you would do so given the fact that such a figure as Dylan is liable at any time to inspire more than just one worthy interpreter; furthermore, because for every one sentence of Marcus’s that you might agree with, there’s liable to be another that will have you dropping your bacon sandwich. To take just one from the latter subset: Marcus’s Village Voice dismissal of Oh Mercy (1989) as ‘shapely and airless’, characterising Dylan as an actor who was merely hitting marks chalked by producer Daniel Lanois. Well... apart from any dissenting listeners’ views, Dylan’s Chronicles would seem to suggest otherwise.
I must digress, though, because really I want to say something about Richard Thompson. Bear with me...
The scholar-journalist/filmmaker/bon viveur Kevin Jackson is, among his many claims on artistry, the authorised biographer of writer-director Paul Schrader, and it was in this capacity that in 1991 he filed a set report from New York for Sight & Sound concerning Schrader’s movie Light Sleeper. One of the many fascinating cineaste-matters discussed between the two therein was Schrader’s quest to score his movie with a sequence of songs that would have both an authorial connection and a linking, pervading soulfulness to them. Schrader first called upon his friend Bob Dylan, for whom he’d once directed a promo clip. The hope was that Dylan would license a number of songs, chiefly from Oh Mercy. But Dylan wasn’t having it. Thus a short-order head-scratcher for Schrader, on which Jackson tried to be of some assistance in proposing alternatives. Who could deputise for Bob Dylan? Van Morrison? ‘Too Irish’ was Schrader’s understandable opinion. Richard Thompson? ‘Maybe too English’ was, if I remember right, the final Schrader ruling...
But just as it’s no shame for George Eliot to be compared with Tolstoy even she’s adjudged to suffer slightly by the match-up – it’s quite true that in Richard Thompson England has a musical treasure/songsmith-guitar hero to set by the finest the world might offer. Somehow I managed to miss that he was lately made an OBE. The Old Kit Bag is my favourite of his recent albums, 'Gethsemane' (below) my favourite song thereupon. Thompson is of course a practising Muslim, and his faith has never inflected his work quite as thoroughly as Dylan’s did his c. 1979-1981. But the cadences of the preacher are present always, nonetheless. 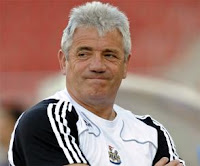 How are things in black and white then? 36 points on the board as February ends, right enough – a decent place to be. Personally I would want 43 for safekeeping, remembering what happened not so long ago to West Ham... But the main point is that this Newcastle team have shown plenty spirit in adversity. It’s not been a bad season yet, on balance, and that is quite something, given the sum of what’s been inflicted on supporters, again as before and always, by its repulsive present ownership.
Andy Carroll is gone and I must live with that, as must all black-and-white-eyed supporters, including those who actually believe that a shred of the £35 million we got for Carroll will be re-invested in the team. For the prosecution, though, I call Kevin Keegan, who talked to Gabby Logan at the BBC for a spot transmitted tonight and who cited his own thoughts when recently he heard Alan Pardew telling the press about his hopes for what he’d do with the Carroll money: “Alan – you ain’t gonna get any of that...”
Posted by Richard T Kelly at 16:29:00 No comments: Links to this post