Norman Geras on the fading of blogs 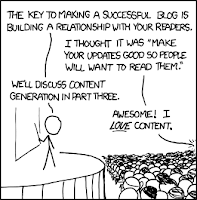 Where was I...? Oh yes, Norman Geras. Proprietor of as thoughtful a weblog as you're liable to find, he made these comments last month (on the eighth anniversary of his celebrated site) in respect of some recent "difficulties in blogging":

"Some of the reasons for them are obvious: this particular debate has been had, and one doesn't feel as if there's anything to add; even if there may be, I don't feel like writing about the same thing yet again; just temporarily the 'topics of the day' don't appeal to me; even if I've got something to say, other people are already saying it, saying it a billion times - in the press, on the blogs, on Twitter; and so on. Whatever the case, until very recently I never had trouble finding what to post about; now sometimes I do. Yesterday I came across [a] post by Andrew Sullivan, in which he says that if it isn't updated at least twice daily it ain't a blog; and ideally it should be updated four or five times a day... Anyone who's blogged for any length of time will know why the rate of posting on so many blogs begins to fade, and why those who pack in blogging altogether, which is many many people, do so. And how many former bloggers now prefer Twitter, as being much less demanding of their time..."


Norm has decided to carry on, though. And so, confound it, shall I. We shall see quite what I'm made of in short order, shall we not...? In the meantime you can of course find me on Twitter...
Posted by Richard T Kelly at 07:28:00 No comments: Links to this post