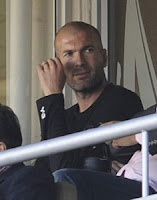 Glimpsed in South Africa (courtesy of Getty images): the maestro, Zizou - brooding, quite likely, on this tournament's dysfunctional Domenech-led French team, as opposed to the previous tournament's dysfunctional Domenech-led French team, whom Zidane nonetheless managed to drag, as if single-handed and Sisyphean, to the brink of a second golden trophy. Would that he were out on the field this time too, doing (some of) that voodoo only he can do...
Not yet glimpsed in South Africa: much quality or verve or excitement, despite the outbreaks of local enthusiasm. I don't require the glut of goals so much as the quality play, from sides looking a bit less glum and gone in the legs (so speaks the Supreme Athlete, from his bathchair...)
The home nation's impending exit (barring a great result against the dysfunctional blah-blah French) is a major downer. Spain's misfire last night has me gloomy, too. My man in black-and-white, Jonas Gutierrez, is being played by Maradona as a defender due to Argentine injury bother. And I don't intend to spend the next 3 weeks just cheering on Miroslav Klose (another version of My Kind of Player.) What's wanted is a bit of magic from The Man in the #10 Shirt - yes, shirt of Zidane, Maradona, Platini, Pele, Puskas. That's where the inciting genius is usually found. So play up, Kaka, Messi, Podolski, Fabregas, Sneijder! Make sure you'll all be around come the knock-outs, then go do that voodoo that you do so well...
Posted by Richard T Kelly at 02:26:00 No comments: Links to this post 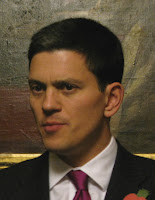 Wanting to assess the performances of the Labour leader candidates on Tuesday’s Newsnight, I had to struggle to see past the truly wearisome MC-ing of Jeremy Paxman, who managed to be snide, peremptory, and unclear – who also, in the chief scripted bit of ‘humour’, thought it witty to characterise Diane Abbott as some sort of high school cheerleader. Eh bien, nice work if you can get it.
Still, moving on. It seems the main thing people say for Ed Balls is that he would be a 'combative performer' at the despatch box. Cameron will be dreaming of such combat, with a man who has the tense, breathless quality of bluster, and is now completing the feat of talking out of both sides of his mouth.
I confess the apparent popularity of Ed Miliband For Leader has so far been a mystery to me and, having had my head sunk in my hands through most of his contributions last night, I only hope it ends up proving a mystery to 'EM' too.
Andy Burnham did better, got in some sharp points with seeming conviction. A caveat for Andy, though: I’m a proud northerner too, and I (and, I believe, others) wouldn’t vote for you solely or even partially on those grounds. Pack it in, eh?
On the subject of Diane Abbott, nothing occurs to me, other than in respect of her curious attribution of the ‘seeming’ public concern over immigration to an actual concern over housing and jobs – as if immigration were not an actual factor in the actual pools of the latter resources. I guess Diane must feel the working class of England continue to labour under false consciousness.
So, to Diane’s champion, and my pick, David Miliband. He said many impressive things and said them impressively, on the need for economic growth, for hard choices in foreign policy, for keeping a cool head on civil liberties and about the size and role of the state. We glimpsed a touch of prideful stiffness in this seemingly irreducible need to don the mantle of Anthony Crosland, but it’s quite forgivable, especially when Paxman (who attended Cambridge and whose own public service amounts to 30-odd years of sneering at elected politicians from a padded BBC chair) leapt in to thumbnail Crosland as some sort of sad ‘intellectual’ loser. Again, nice work, Jeremy. Rave on, our David.
Posted by Richard T Kelly at 03:29:00 No comments: Links to this post

Strange to recall that nearly nine years have passed since the day I called in as a visitor to the Saville Inquiry in Derry. It was on Monday, June 25 2001, that I stepped inside the Guildhall, out of a sunlit Derry afternoon, and found a breathtaking technical operation in progress. The Guildhall’s Gothic main chamber had been converted into what Richard Harvey – barrister representing the family of Jim Wray, a victim of ‘Bloody Sunday’ – called ‘Courtroom Starship Enterprise’. Sixty lawyers sat in attendance, a great nest of black crows: three for each victim, plus a group representing the paratroopers. Each was fitted out with a personal computer and a lectern from which they could question the witness, and such was the crowd in the chamber that each QC found himself gesturing to get the witness’s attention so that proceedings could commence.
Large screens were suspended from the oak-beamed ceiling, displaying close-ups of highlighted transcript passages, contemporary photographs, and even a VR recreation of the Bogside, reviving the long since demolished Rossville Flats. As a witness testified, they could refer to a virtual panorama of the Bogside, move around 360 degrees, even draw on the screen with a marker in the manner familiar to us from sports programmes on TV.
Taking the stand during my visit was Ms. Susan North, an Englishwoman in her mid-50s, elegant in a cream dress, pearls, and a hennaed bob. Her job as assistant to photo-journalist Fulvio Grimaldi brought her into the Bogside throng that day. When the shooting started she and others sought refuge in the Rossville flats. To get into a particular flat she had to step over the body of 17 year old Kevin McElhinney, shot dead as he tried to crawl to safety in a stairwell. Once in the flat, she and Grimaldi had to dive for cover as incoming shots were fired through the window. Ms North’s tape recording of this gunfire was played in silence that day at the Guildhall. Much argument ensued about a pretty well inaudible remark transcribed as ‘Let me get the bombs out first’: Ms North remembered hearing or seeing nothing of the sort. She did meet a man with a pistol in his pocket, who was afraid of being ‘lifted’, as they say in the North. And in the streets she saw more fallen bodies, people who’d been shot – five dead, three wounded. ‘Even the most hardened person’, she told the Tribunal calmly, ‘could not fail to have been touched by the monstrous scene.’
David Cameron’s speech to the Commons this afternoon, relaying the main findings of Saville’s Inquiry, moved me considerably. Not that I have any personal stake in the matter, you understand – it’s simply to do with the accumulated tensions of it, which anyone can feel who has read and reflected on the history.
It’s reckoned that ‘The Troubles’ claimed 3526 lives, and certain parties will insist on arranging these names in columns and imagining that a slide rule can show beyond doubt which side was more sinned against than sinning. The poet Thomas Kinsella lamented the tragedy very well albeit at what turned out, sadly, to be a very early stage in the conflict: ‘There are too many dead, on all sides, and it is no use pitting them hideously against one another.’
What we now know for a fact is that in the Bogside district of Derry on Sunday, January 30 1972, at the culmination of a march by the Northern Ireland Civil Rights Association against internment without trial, unarmed Catholic demonstrators were purposely shot dead by soldiers of the First Battalion Parachute Regiment under Colonel Derek Wilford. We know this now in spite of the subsequent inquiry of Lord Chief Justice Widgery, who decided swiftly and erroneously that Wilford’s men had met IRA gunfire as they entered the Bogside, and that several of the thirteen rioters then ‘dropped’ by Para sharpshooters were themselves armed.
Posted by Richard T Kelly at 16:03:00 No comments: Links to this post