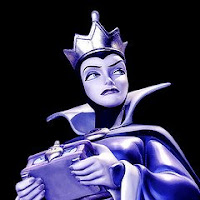 The latest 'classic' from the Disney canon that my daughter has discovered and seized upon is Snow White and the Seven Dwarfs, so I’ve watched it about a zillion times over the last seven days. Still, unlike Cinderella, this one is more or less a pleasure: clearly, all things considered, a great movie, hugely innovative for its time, with intricately shaded passages that still startle – all of these the ‘scary ones’ concerning the Wicked Queen, of course, rather than the eponymous heroine and the titular 'little men'.
The boldness of the picture is all there in how it opens, with the black castle, the Queen and the superbly animated Magic Mirror. The Queen’s later transformation into the Old Hag is still a tour de force in a subsequently crowded field. The picture takes obvious and age-old mythopoeic elements and makes them newly beautiful and forceful, just as did Cocteau (albeit more archly and richly) in his rightly adored Belle et la Bete and Orphee.
The Queen was but the first of Disney’s appalling stepmothers, and the first villain to suffer the standard Disney villain fate of death by a nasty fall. Watching her haughty/gleeful malovelence this time I was reminded of Anne Sexton’s description in her Snow White poem: ‘Pride pumped in her like poison.’
The other eminent female writer summoned to mind when one thinks about the rich reworking of fairytale is of course Angela Carter, whom I began to read with huge enthusiasm back in the mid-1980s after the release of Neil Jordan’s film The Company of Wolves and the near-simultaneous publication of what seemed to be her most successful novel, Nights at the Circus. Helen Simpson writes interestingly here about The Bloody Chamber, the story collection that inspired the Jordan film and which also includes Carter's warped mirror-image of Snow White, The Snow Child.
I was flicking through some of Carter’s books only a few weeks ago, for the first time in twenty years. She was brilliant, and her best sentences are stinging, sensual images that lodge in the memory, though she could also inflict page after page of overdressed fancy on the reader. Simpson quotes Carter to the effect that she insisted she was only using the ‘latent content’ of ‘traditional stories’, content she believed to be ‘violently sexual.’She was right, though there’s part of me that feels that fairytale or myth played straight is more stark and suggestive and involving than any sophisticated post-Freud/Jung re-imagining. One doesn’t want to spend too much time in the dream world, behind the mirror... But then, it might be different for girls.
A novelist who was taught by Carter at one of her many Creative Writing perches once told me a funny story about how he went on a fell-walking/pot-holing excursion in the company of her and some other students, only to take a bad fall and injure his ankle. He remembers Carter being a useful part of the rescue/relief effort, but also that she spent a certain amount of time gazing thoughtfully at him during his plight. He later understood that she had been recording the details of the accident mentally, in case she needed to draw upon it later for fictional purposes. Ah, the writer, and the chip of ice in his or her heart…
Posted by Richard T Kelly at 15:29:00 No comments: Links to this post


As every couple of years in this particular passage of life, the question comes round: should I buy Bob's new one? My story on this score is only much the same as that of a million other hardcore rock adherents. For the adolescent me, Husker Du were unquestionably the most vital contemporary band in Christendom c. 1985-87 (when they threw out about 3 albums a year, some of them doubles, unlike Bob's more stately output these days, at the age of 47...) The Fraught First Solo Period (Workbook, Black Sheets of Rain) was in time for my late-teenage 'transition' moment; then The Sugar Years were more or less contemporary with my College Years; and I was around for the start of the Second Solo Stint, but this was also the point where I stopped going into shops and buying music...
Bob's previous, District Line, I was given as a gift, and I've been playing it today while writing. And looking round the web (as above) there are some stirring glimpses of the new material. So, yeah... I think I'll get myself to a record shop next week and buy me Life and Times. Not Woolworths anymore, sad to say etc, as I did for my last purchase, the mighty Chinese Democracy (see passim). But then Woolies never stocked Bob's stuff anyhow, I'm fairly sure.
I hear Bob is even writing his autobiography now, for the editor Michael Pietsch at Little, Brown, NY, a guy I met once in very fraught circumstances and liked a great deal. Maybe I can persuade him to send me a free copy down the line. Le Crunch, bien sur...
Posted by Richard T Kelly at 08:39:00 No comments: Links to this post

Alistair Darling: Do You Really Want To Hurt Him? 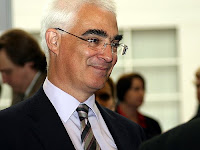 I looked at all the headlines today for the first time in about a fortnight, and everybody's pretty well sick of the government. Those who aren't, seem to be grasping for something else to talk about, to waste the jury's time. PoliticsHome offers the 'first poll since the Budget' and it suggests that most people found most of the measures reasonable, but they don't believe anything the Government predicts, and the biggest issue on their minds is the stupefying scale of our debt. Hence, the return of a 20-point Tory poll lead is cantering up to the horizon.
The public don't seem to bear too much of a personal grudge against Darling, though. Perhaps they find him largely pitiable, soon to be out of a job like so many of us. Perhaps they're just relieved it's not Fred Goodwin who's keeper of our nation's purse-strings.
Anatole Kaletsky in the Times has defended Brown once or twice in the last 12 months, a form of seppuku in certain social circles, so I read a piece of his deriding the Budget from top to bottom with great interest. Somewhere near the top, he tossed away the merest notion that Cameron didn't have any better ideas, and one was slightly interested to see that all the comments his piece had attracted were from a gaggle of little Tory-Boy online invigilators crying 'How dare you? Prove it!' etc etc.
Posted by Richard T Kelly at 09:50:00 No comments: Links to this post