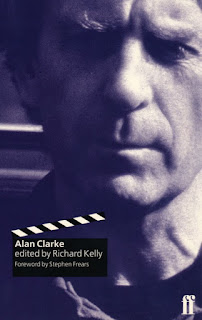 The late Alan Clarke is one of those artists whose reputation is like a rumour, or a challenge. The body of work is attended by controversy, and those in the know tend to say that no-one did it better or tougher than when Clarkey did it – the ‘it’ in question being plays for television, the ‘when’ being the dramatically rich era of the 1970s and 1980s.

I’m always keen to have a hand in spreading the good word about Clarke. In 1998 I wrote his biography for Faber and Faber, my first published book. I say ‘wrote’ but it was really a work of oral history, George Plimpton-style, where I interviewed a wealth of his friends and family, collaborators and lovers, and stitched those transcripts into one multi-vocal life story. And I daresay Clarke’s life tells you as much about Britain, class and society in those years as his films do. My favourite review of the book, you’ll not be surprised, is this one by David Thomson, he of the Biographical Dictionary of Cinema, who was a big early champion of Clarke among the film-critical fraternity.

Now, Clarkey fans are living in exciting times, because at the end of March the BFI will start rolling out a huge tribute, ‘The Complete Alan Clarke’, with events and screenings at the South Bank and a comprehensive DVD/Blu-Ray boxset. There have been other such celebrations since Clarke’s death in 1990 – I helped Lizzie Francke and the Edinburgh Film Festival with one such in 1998 – but the BFI platform gets a huge boon from having the Clarke oeuvre packaged up so marvellously in one collectable digital set. 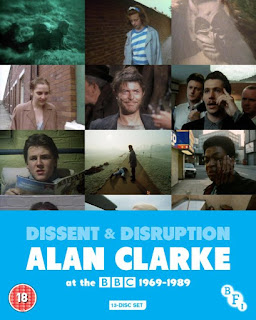 Sam Dunn at the BFI has been the overseer of this great undertaking, and I’ve been happy to chip in a few embellishments to the boxset: new essays on Road and The Firm for the booklets, and an audio commentary with national-treasure actress Janine Duvitski for Diane, one of Janine's earliest screen roles, possibly her best. My book is going on sale again, and I think I’ll be giving a public talk or two once the season goes out and about countrywide.

Looking again at just a few of Clarke’s films I was pleased but unsurprised that age doesn’t wither them, because they were made with such care and conviction, such focus and force. Clarke was only interested in strong-meat subject matter, and he cut to the bone and cast aside the fat. I would love to see what new audiences will think and feel as they come for the first time to Penda’s Fen or Made in Britain, Scum or Elephant, Contact or Christine, et cetera.

Working on the book was a very happy time for me, one I owe to Walter Donohue, editor of the Faber film list who had input in that moment from the brilliant soon-to-be award-winning filmmaker Kevin Macdonald. It was late November 1997 when Kevin gave me the green light to start writing Alan Clarke – on the proviso that I deliver in March 1998 so that finished books could be ready for Edinburgh that summer. I made it, just, having met about 70 remarkable people over 16 weeks, some of them now gone, alas – such as producer Mark Shivas, cameraman John Ward, and the great Brecht scholar John Willett, who helped out Clarke and David Bowie with their remarkable Baal.

One of my treasured souvenirs from publication was a handwritten letter sent me by Christopher Eccleston, who wrote to say that Alan Clarke was the whole reason he became an actor, and that he felt my book ought to be set reading in all British film and drama schools. Well, what a lovely thought, and I wouldn’t fight it, you understand… The book, though, is only a useful companion to a body of work that ought to be required viewing for anyone who respects film. One good friend of Clarke's among my interviewees, typically mischievous, told me he thought I ought to become ‘Professor of Alan Clarke Studies at the University of Scum.’ Well, if that were the badge I’d wear it proudly.

Postscript: One of the trickier parts of biography is conveying the sense of humour of one's subject, especially if that person was/is routinely said by those who know them to be 'very funny' in person. Everyone I met thought Alan Clarke was really, really funny, and I could see why. The challenge, then, is how to adduce the right examples of witty remarks, behaviour etc so as to encourage the reader to imagine all the fun they'd have in such company. (I had the same challenge down the line with Sean Penn, who's also really funny.)

The trouble in the case of Clarkey was that the examples my interviewees tended to offer me were either a) things that didn't work on the page, such as puns and other bits of verbal dexterity, or a certain way of looking at someone, or b) things that were, at least in the opinion of my manuscript's early readers, un-printably rude/filthy, even if in good sport. So most of those gags hit the cutting room floor... but they were certainly funny at the oral stage, in the telling and the hearing, and I do sometimes share them with other Clarkey fans in the right circumstances, i.e. when propped up agreeably at 'Mahogany Ridge'.
Posted by Richard T Kelly at 05:54:00 No comments: Links to this post