The Killings in Northern Ireland 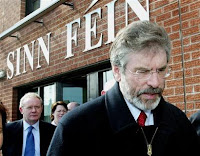 Early this week PoliticsHome surveyed its political mates in the know, most of whom seemed to feel that Sinn Fein's first public response to the killing by republican dissidents of two British soldiers at Massereene Barracks was, in the well-known phrase, "mealy-mouthed." "One left-leaning media panellist says: 'Sinn Fein has to decide which side it is on.'" Interestingly a Tory MP told PH that he felt Adams gradually got more in synch with the tone of McGuinness, whom he felt 'from the start has been tougher on the dissidents.'
Anyhow, all this has changed, if not utterly, since the killing of the Catholic police constable Stephen Carroll, McGuinness's description of the killers as 'traitors', and his call upon PC Carroll's widow in the company of DUP First Minister Peter Robinson. Lord Tom King (who, when Northern Ireland Secretary back in the late 1980s, came to my school one day to open a sports hall) today declared himself impressed by the Sinn Fein leadership: “It's the big test for them, I think. The first couple of days of the real test has been encouraging."
'Traitors' is not a word you will hear Gerry Adams use, for many awkward reasons, rehearsed in this Times article by Kevin Toolis which unpicks a wearily familar recent history that I hoped I would never have to revisit. So here we are again. But things have changed, no question.
Back in the far more dangerous early years of the post-Good Friday 'process', the former priest and mediator Dennis Bradley drew on his theological training to advise Sinn Fein that it had to follow the logic of its public position: if the republican movement was In this process and not Out, then there could not be two armies within one state. Bradley, an excellent man from Buncrana, knew exactly where he stood, and was even made to suffer for that stance in a nasty incident at a Derry pub. But the logic remains, has got harder yet, and has clearly impressed itself on McGuinness and on Adams, whomever is the more vocal or less tongue-tied of the two.
Posted by Richard T Kelly at 03:56:00 No comments: Links to this post 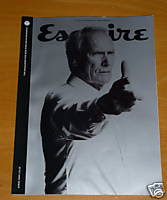 They say Clint Eastwood has retired from movie acting, though I don't have to believe it, any more than do the many newspaper scribes (some of the same vintage as Clint) who have been penning nostalgic can-this-really-be-the-end? pieces in the wake of Gran Torino. (Peter Preston, for instance, former Guardian editor and film buff, who must quietly fancy himself as a bit of a veteran gunslinger.)
In any event, Clint the Director marches on. The Cannes Festival just gave him an honorary lifetime-achievement Palme d'Or, something they only bestowed once before, on Ingmar Bergman no less. Whatever you think of Clint the auteur, it's a fact that had he not existed then French film critics would have had to invent him, so closely does he resemble what they require American Cinema to be, or to mean.
Anyhow, here's Clint on the cover of another excellent issue of Esquire, just out. My contribution this ish is a piece about the new film version of David Peace's The Damned United. Among the more digestible things I say therein, this gobbet, after describing the picture as 'a typically English love story':
"[The film] shouldn’t be judged against Peace’s novel, but nor should it be forgotten that the novel is essentially a hate story – specifically the demoniac hatred Peace’s Clough feels for Revie and Leeds, worsened by other baneful spirits (including booze.)
Posted by Richard T Kelly at 03:41:00 No comments: Links to this post

Alastair Campbell: Reading Him Writing on His Watching Himself

As blogs go, Alastair Campbell's is of more obvious interest than most, although - as with his bestselling Diaries, and as with the public pronouncements of his former boss - you really have to read hard between the lines to separate what he means from how he wishes you to see him. But then that's also true of a lot of less famous bloggers...
Still, if you want to really tie yourself into knots on the subject of the relatively small but endlessly dynamic and self-referential world of Meeja, do read Campbell's account of attending a private screening of Armando Ianucci's already much-acclaimed movie In The Loop, and his careful explanation of exactly how, why and when he will be contributing to the publicity drive for the film. You could say it's a study of a master at work; or you might feel less charitable; or whatever. Mr Campbell won't mind, he's made of sterner stuff, as we're quite often reminded.
Posted by Richard T Kelly at 03:26:00 No comments: Links to this post