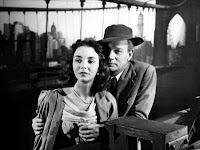 In case I was sounding too morose below, I should say that one fairly solid-looking item on my professional dance card for 2010 is the filming, in February, for Channel 4, of a 30-minute drama script of mine entitled Jennifer, which is being developed under the channel's invaluable 'Coming Up' strand for writers and directors new to TV. The director is a very gifted young Belfast man called Michael Lennox, and the Jennifer script is a variation on such themes as the enigma of romantic attraction, and the mystery and mutability of female beauty. I named it Jennifer as a sort of hommage to Jennifer Jones, the long-retired Hollywood actress, star of (inter alia) Duel in the Sun, Cluny Brown, Portrait of Jennie, Gone to Earth and Beat the Devil. And I noted Jones' death on December 17 last year with a bit of sadness.
I admired her in many films, more as a presence than as an actress, though she certainly had something there. Above all, though, it was her performance as Jennie Appleton in Portrait of Jennie (1948) that made me such a devotee. In Ten Bad Dates I wrote the following on that score:
The cult of Jennie is founded on two exceptional film-historical factors: it was a pricey super-production from the obsessive mind of David O. Selznick, devised for his wife Jennifer Jones; and it is one of the few Hollywood studio products that had Bunuel in rhapsodies (‘a mysterious, poetical and largely misunderstood work’).
Joseph Cotton plays a penniless, disconsolate painter who encounters a strangely fervent little girl in Central Park. She dresses and talks as though from a bygone era, and sings an odd unsettling song (‘Where I come from, no-one knows / And where I’m going, everyone goes.’) Thereafter he continues to run into Jennie or, rather, she is continually running toward him from out of the gloom (always shot in low angle, a hazy sun or glowing moon behind her.) And she’s a little older each time.
Cotton’s painting, meanwhile, is marked by a new passion. He realizes the strangeness of what he’s doing – some basic detective work confirms to him that he’s in love with a dead girl – yet gives himself up to it, not least because of the powerful nothings she whispers into his ear (‘Of all the people who lived from world’s end to world’s end, there is just one you must love, and you must seek until you find him.’)
David Thomson, Selznick's biographer among his many distinctions, wrote a thoughtful obit of Jones for the Guardian, making reference to the unfortunate Brittany Murphy. The Telegraph obit took a rather dim, mordant view of Jones' Life & Work, and its recounting of some of the grimmer biographical details would make anyone wince. Some Telegraph readers, though, were moved to leap to Jones' defence in the comments section - such is the power of the movies, for they never met her. Even David Thomson never got near, as he ruefully recalls in his own piece. That was Jennifer, something of an enigma...
Posted by Richard T Kelly at 04:58:00 No comments: Links to this post

As an allegedly professional writer of fiction I might look back on 2009 with a certain sense of unease, insofar as one could say I failed to produce any writing of substance - at least, nothing fit for any significant number of people to actually read: a novel in the works, for sure, just as in 2008, but still a fair way away from home; a couple of screenplays, both in development limbo; bits and pieces of a couple of stage plays, still not resolved into wholes... you get the picture.
As such, I look over the literary reviews of 2009 in wonder at the wealth and diversity of published work, and am reminded, in the words of Roland Barthes, that the world is full without me.
So, it's heartening to see a couple of recent and friendly mentions for back-catalogue stuff of mine out there in the blogosphere: over in Maine, Mallory seemed to like 10 Bad Dates, while up in Hampshire Mark D gave a thumbs up to Crusaders. This is why we soldier on, see...
Posted by Richard T Kelly at 03:00:00 No comments: Links to this post