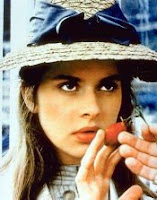 The BBC are running their new version of Hardy's Tess of the D'Urbevilles, which is a perfectly natural and interesting thing for them to do given the public's liking for grand old books well-mounted, and this sorry tale in particular. Gemma Arterton, about to take her bow as this year's Ill-Fated Bond Girl (as well as the face of a new Bond Girl fragrance) takes the lead. I caught a few minutes the other night and it all looked fine and affecting enough. But the age you are counts when you come to these things, doesn't it? Back in 1979 aged 9 I was desperate to see Roman Polanski's big-screen Tess, just because of the utterly indelible impression made on me by its poster featuring Nastassja Kinski, who definitely at that time eemed to me the definition of an angel on earth. I eventually got to see the film a couple of years later on video, and it haunted me, as the saying goes. I only had an idea, albeit a fascinated one, of who Polanski was. It took me another year or so to find his memoir Roman and learn that Tess was a book Sharon Tate kept by her bedside and urged upon her late husband; that his version was a form of uxuriousness, a debt of love; and that Polanski never needed to be told that the world is cruel. So yes, Kinski's beauty was a big factor in luring me to Tess the movie, and I became her dogged fan over the next 5 years as she appeared in about 43 movies, of varying distinction. But Tess was also the start of my love of Polanski, and the near-ancient sense of fatalism and sadness that underlies his work. He was the right man for Tess, whatever they said at the time.
Posted by Richard T Kelly at 05:11:00 No comments: Links to this post

This last week has had me re-reading The Great Shark Hunt, Hunter Thompson's late-70s era compendium of his journalism, which ends with the long interview-based study of Ali done after the first Leon Spinks fight. It's glorious stuff. Some say Thompson never wrote anything else that was much good thereafter. Whereas Ali beat Spinks in the rematch in New Orleans, though some might say it came at a grave cost to his physical wellbeing.
Thompson found Ali licking his wounds somewhat, but never down, never out. He blamed himself for not having got in the right shape and mindset, however younger and fiercer was Spinks. He had been with his adored wife and kids right up to the fight, which was lovely, but the doting had made him soft.
So what will you do if you get another shot? asked Thompson.
'I got to get away from the babies', said the Champ. 'I got to get evil. Gotta chop trees, run up hills, get in my old log cabin.'
And that's not the worst advice for a writer either, every once in a while, if indeed they happen to have an old log cabin at their disposal, and just as long as they get all that 'evil' stuff out and pinned onto a page before they come home.
Posted by Richard T Kelly at 15:41:00 1 comment: Links to this post

The Strange Case of Richard Kellys 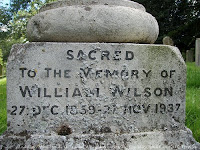 Thanks to a deft intervention from my brother David this site can now be accessed via the URLs http://www.richardkelly.co.uk/ and http://www.richardkelly.org.uk/. Well and good, and my only vague unease arises in the thought of now trying to lay sovereign claim to my given name online, shy of its distinguishing middle initial. That 'T' had to be affected as long ago as the Dark Ages before online search engines, when I realised how common was my name, indeed with what regularity it would crop up in the particular fields of endeavour (film, literature) where I was trying roughly to make my way.
In fact, even before that (and new acquaintances of mine tend scarcely to believe this Amazing Fact), at university I made a great friend in a guy who was also called Richard Kelly, and with whom I actually shared digs for a year, causing the inevitable calamity for all post and telephone enquiries. Richard was and is - would you believe it? - taller and better-looking than me, so the confusion mercifully ended in the flesh, so to speak. But as a fan of Poe's William Wilson and Conrad's The Secret Sharer and Nabokov's Despair and just about every other literary fable of the doppelganger, this Stunning Coincidence was of great amusement to me just as it was to Tall Richard, 'mon semblable, mon frere'. But at that juncture we both of us agreed that the adoption of a middle initial in certain matters would be politic.
Yet this was not the end of the strange case, dear sir, oh no. When I published my first book Alan Clarke in 1998, I pondered for a while and then decided to take the plunge of being billed as plain old Richard Kelly: a way of making my first little self-affirmative scratch on the wall of books and bookmen. Utter folly, as it turned out, for when scouting around for reviews my heart jumped on several occasions to see my name listed in the table of contents - only to find that I shared my name with not one but two reputable scholars, one the acknowledged authority on the poems of John Berryman, the other a teacher at Manchester Grammar Scholar with several well-praised volumes to his name on the psephology of British general elections.
'Scoundrels! Imposters! Accursed villains!'
Well, no, of course - in fact, I wrote to the Manchester RK inviting him to share in the amusement of the Great RK coincidence, and he sent a very witty reply full of Dostoyevskian ironies, asking me that I please be sure to keep him apprised of what We were up to.
All of this had come to pass even before the young Californian film director of Donnie Darko and Southland Tales fame reared his head. I severely doubt he's ever been mistaken for me, but you would be surprised how often the opposite used to occur... More than once I received emails from hip art magazines asking for my contribution or views on some cultural issue of the day, and with a sigh I would realise that the request was intended for my youthful and famous namesake. Still, I would do my best to preserve the masquerade and send back obscene and highly inappropriate replies to these magazines, just to make things a bit tougher for the talented young master. (Not really.)
Still, one should dwell on the matter no further. Clearly all these Richard Kellys are a good bunch of people with which to be grouped, even if only via aforementioned search engines. Presumably there are honest people out there called Jeffrey Archer, say, or Jonathan Aitken, who have never held a position in any Tory cabinet but must occasionally feel themselves traduced by association nonetheless.
Posted by Richard T Kelly at 02:56:00 No comments: Links to this post

Get Shearer, or, The Medals of his Defeats 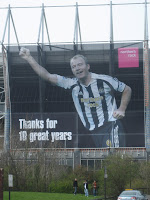 I know a fair few Newcastle United fans, and I reckon they’re all pretty smart and astute and ironic about the football club and the game of football in general. Indeed some of them write on these very themes with great acuity, as at the excellent nufc.com. None of them have ever entertained any daft delusional ideas about Alan Shearer as some sort of Geordie messiah. Rather, there has been a general admiration tinged with scepticism.
Geordies are canny, they don’t suffer fools and they can sniff a wind-up. (In fairness, the very Geordie Shearer is made of the same stuff.) So any idea that the self-professed sheet-metal worker’s son from Gosforth was a flawless/selfless professional and immaculate team-player/leader who walked on Tyne waters and will one day come walking back to lead NUFC to the Promised Land… Get away, man. Never heard the like of it, other than on those Sky Sports vox-pop packages where the reporters bribe kids on the Barrack Road to say what they need for their preordained story. All this nonsense arises again over the reports stirred up by a dozy Joe Kinnear that a post-Ashley NUFC has Keegan and Shearer ‘parked round the corner.’ No-one in NE1 is losing any sleep over this fantasy.
All this said, it’s important to stress that Alan Shearer was an effing magic footballer. There’s not a football team the world over who wouldn’t be proud of a local-born striker who identified himself so strongly (and, in the main, unaffectedly) with the area, and also scored 200+ goals for the side in 10 seasons. So-called football experts make themselves ridiculous when they try to Get Tough with Shearer’s record, on which he always tersely asserted that he would be judged. Take the utterly third-rate Rob Smyth of the Guardian who last week attempted a critique of Shearer’s career stats so dripping with snide ill will and so foolishly argued as to constitute its own rebuttal.
The various Get Shearer factions are a funny old bunch. Man United fans are generally excused from this as their bragging rights are so strong, all the way from the ‘Let’s all laugh at Shearer’ chants struck up at the 1996 Charity Shield when Man U diddled the newly Shearer-enhanced Toon 4-0. That’s the main anti-Shearer plank: that his medals were largely born of defeats. True, other than his Blackburn league win Shearer’s career ‘victories’ were mainly pyrrhic. But Alex Ferguson knows football better than anyone in these isles, and his admiration of Shearer was avid and unfeigned if unreciprocated (twice), so Man U fans just have to swallow that little truth.
The other main hate-rap on Shearer was that, after his ankle injury of 1997 that robbed him of his pace, he became a bit of a lazy bully on the pitch. I have stood or sat in many an away ground and listened to fans delighting themselves with mucus-filled chants of ‘F@?k off Sheera yew c**t.' I have mingled with fans of the national side who thought Shearer as England captain and #9 was ‘a f@?king arrogant disgrace.’ Shearer himself tended to thrive on this stuff – not that he always got the last laugh, no sir. But I think the animosity he attracted is part of what made him special. He just really got up the noses of rival teams and their fans, and people generally don’t like it up them. And the main way he did that was by being a classic big English #9 - big shoulders, big shooting boots, same old Shearer, always scoring.
Management, by comparison, is a thankless task and requires a different skill-set, so for me as for thousands of Newcastle fans, I’d be perfectly happy if Shearer remained himself a Newcastle fan and kept smartly clear of the NUFC dugout.
Posted by Richard T Kelly at 10:55:00 No comments: Links to this post