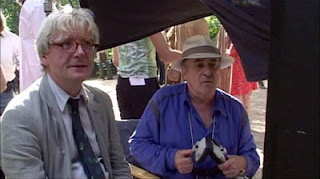 So Gilbert Adair is gone, and the fine tributes that have followed already are a splendid expression of his achievements as a writer, as well as the good friends and impressions that he made everywhere.
I first discovered Gilbert Adair for myself as a young reader at a time (the mid 1980s) when he was one of a select band of critical writers whose acute literary-visual sensibilities made cinema feel like a significant 20th-century creative endeavour, and a lustrous aesthetic universe that was well worth exploring. Gilbert wrote widely and with great finesse about film: there was wit and playfulness there, as well as a severe assessing eye. My regard for him only grew as I learned of his accomplishments in literary translation (mainly French, clearly his passion); and then around 1989 he began to publish novels, in which all of his reading and viewing were intensely present but which nonetheless wore their learning lightly and offered all sorts of clever and impish pleasures. Love and Death in Long Island, his sly twist on the classic perverse erotic-obsessive classics of Mann and Nabokov, was a book that had me in stitches (and I think of it still whenever I happen to glance at the teenage pop fan-mag sections of any London newsagent's wares...)
A bit later in life I shared an office at Faber and Faber with Gilbert's editor and friend Walter Donohue, and by these means I was very pleased to make his acquaintance. There was both a careful privacy and a sort of refinedly performative quality about him that indicated you would have to work diligently to know him better. But certainly any meeting with Gilbert would be memorable for the range of glittering subject matters that would be raised and rated in quickfire fashion.
When I put together a playful book of cinephile film lists called Ten Bad Dates with De Niro I was delighted that Gilbert made a contribution: a stunningly varied selection of noteworthy films that had (for an assortment of reasons) rather vanished from the face of the earth. Gilbert stuck up for the so-called lesser works of auteurs, cult efforts that deserved better than extinction, and pictures unfairly denigrated by critical fashion (including, perhaps inevitably, Adrian Lyne's Lolita...) In this small way it was a pleasure to work with Gilbert, and to experience close-up (as in his freely expressed opinion of the book's title and artwork) his exquisite taste.
In the range of his interests and writings, and the prodigious way in which he turned his hand to storytelling of his own, Gilbert was a model of the critic-turned-practitioner. To have adapted his novel The Dreamers into a screenplay filmed by Bertolucci has to be as good as it gets for any true cinephiliac. I remember him well at an early screening of the picture, highly nervous of course, but evidently living something of a dream, and deservedly so. (That's him and the maestro in the picture above.)
Thinking back I realise I first saw and heard Gilbert - having admired him for some time only on the page - when he introduced a BBC screening of some films by Cocteau, and offered a typically brilliant and succinct biographical-artistic portrait of the great man. He referred to Cocteau at one point as a 'crackerjack of all trades'; and I daresay Gilbert himself is deserving of a similar sort of epitaph. Moreover he was a special man with his very own charm and you can see already how much he's missed.
Posted by Richard T Kelly at 05:48:00 No comments: Links to this post