To Belfast, for 'Alan Clarke in Northern Ireland' 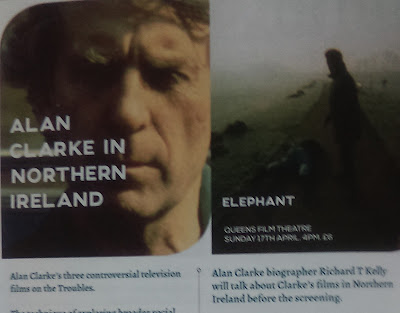 This weekend just past gifted me a chance to revisit the work of Alan Clarke and my book about his life and times. The past beckoned me in for more than one reason, too.

I was at the Belfast Film Festival, which was presenting a sidebar of Clarke’s films on Northern Irish themes, and I gave a talk before the screening of Elephant (1988), the 38-minute tour de force that Clarke co-conceived with then-producer Danny Boyle and Steadicam maestro John Ward. The venue was the Queen’s Film Theatre, splendidly refurbished since its amiably distressed lecture-hall ambience in the 1980s when as a teenager I sat and watched Battleship Potemkin and Rashomon and Blue Velvet.

The Festival grew out of West Belfast, and its Feile an Phobail founded in 1988 subsequent to a particularly dreadful passage in the ‘Long War.’ It’s gradually expanded itself into a city-wide offering. The environment is good and buzzy, the programming by Stephen Hackett is superb, and the festival has an admirable commitment to community outreach, also to archival work and introducing the tools of film and their worth to a wider public. On the liaison side I was very well met by and enjoyed the company of Jim Meredith and Sean Osborne. And one great perk of the event was that I got to chat to Jennifer McAufield and Paul Clarke, who actually worked with Clarke on Elephant (as First AD and Designer respectively.)

My lodging in Belfast was the famous Europa Hotel, also vastly improved (for starters we drove right up to the door and I walked straight in) since Clarke and Ward stayed there in 1988 during the production of Elephant: I recall John Ward describing to me the inevitable bomb scare he and Clarkey endured back then, the precautionary piling of mattresses against windows by staff, the plying of guests with free booze as if to stiffen resolve.

If you stroll the centre of Belfast now the surface effect of years of peace dividend are clear; also the fruits of how much European money underwrote post-conflict reconstruction. That said, the visible campaigning for the Stormont elections in May would remind you that politics there retains a whole horde of familiar hostilities. And you don’t seriously assess the health of a city by its main commercial thoroughfares, agreeable as they are these days.

But, be there no mistake, it’s only one of a million things that speak well of the political processes of the last twenty years – and the resultant opening-out of the society – to say that all sorts of films can now be made in Northern Ireland. I only wonder what kind of film Alan Clarke might have made in Belfast today, had he lived?

Moreover – you see I did some thinking – how was it that back in the 1980s Alan Clarke became such a voice on the subject? Fair enough, quite a few of his contemporaries (Loach and Leigh inter alia) came to Belfast and made films: it was obvious, pertinent, arresting subject matter. But Clarke’s Northern Ireland films aren’t like anyone else’s. They’re pretty exceptional in the history of film, full stop.

Here’s the thing, in my view. The 1980s are when Clarke began to evolve from the loyal, driven collaborator of writers like Roy Minton and David Leland to being an auteur of the TV play: a director who put his signature on the work through formal choices with the camera and in the cut that were so bold that the script began to seem only a point of departure. And Northern Ireland by the 1980s was increasingly a terrain for storytelling where traditional three-act narrative looked inadequate to the thorny reality – the issue of what side you came down on leaving the filmmaker liable to run into dramatic dead ends just as implacable as ‘peace walls’.

Clarke, moreover, saw things with a different eye; and it was useful that he didn’t hew to an ideological line. I remember asking Roy Minton what were Clarke’s ‘politics’. Roy replied, ‘He didn’t have any... I was Left, and it got as bad as joining The Communist Party. But what Alan had was the indignation, he recognised injustice.’

Of the three Clarke films showing in Belfast, David Leland’s Psy-Warriors (1981) has aged least well, I’d say. Its premise is that three suspected terrorists are being interrogated in special cells following a pub bombing near Aldershot army barracks that bears the hallmark of the IRA. The viewer isn’t spoon-fed this information: the film is aggressively disorienting in its use of sound and space and cutting, Clarke wants you to feel a bit of the deranging nature of interrogation. Leland had been inspired by Peter Watson's book War on the Mind: The Military Uses and Abuses of Psychology.

Gradually you sense Psy-Warriors really wants to advance an idea of a symbiotic relationship between governments and terror threats, as oft inferred from Reginald Maudling’s infamous line about an ‘acceptable level of violence’ in Northern Ireland, and the attendant theory that the six counties were a kind of policy laboratory for the security forces of the British state. Colin Blakely, the late great character actor from County Down, is very good as the chief interrogator. Yet when he speaks in high solemnity about the rationales of the Baader-Meinhof gang, you can feel the film’s intended critique of the repressive state succumbing to the fallacy of taking all self-declared revolutionaries on their own terms. If violence is really to be read as a kind of communication, you’re best to read what it’s really saying with some care.

Contact (1984) is my favourite among Clarke films, but it travels some way from its source material, which is A.F.N. (‘Tony’) Clarke’s memoir of commanding a paratroop patrol on border duty in Crossmaglen in 1976. Tony Clarke certainly wrote a script, and the film extracts a concentrated essence of something that strikes you on the page of his book: the loneliness of command when leading men on hazardous operations against a largely invisible enemy in ‘bandit country’. But Alan Clarke’s film replaces Tony Clarke’s frank, unleashed, first-person voice with the sense of the camera at a remove from the fray, an austere God’s-eye observer, as close to birdsong and trees and to carpets of green field as to the soldiers moving warily across them – at least until ‘contact’ occurs, at any rate.

Clarke had his cast drilled within an inch of military discipline, and during the shoot he steadily pared away the script’s exposition and dialogue. He put long lenses on a moving camera and the actors began to lose that sense of the line between being ‘on’ and ‘off’, such that they just behaved as soldiers like they’d learned how to. For the viewer it becomes redundant to ask whether Contact is sympathetic or otherwise to the presence of the British Army in South Armagh. To appreciate the film properly you just have to try to walk a mile in a squaddie’s boots. Contact is as pertinent a study of soldiering now, in the age of the Three-Block War, as it was in 1984. But it’s just masterful filmmaking by any measure. According to John Ward, who did time on Full Metal Jacket and Eyes Wide Shut, Stanley Kubrick was a big admirer of Contact. And Kubrick knew about war films.

Elephant (1988) is unique and unclassifiable. Ironically, Danny Boyle arrived in Northern Ireland as a BBC producer with the express aim of encouraging writers and dramas that weren’t inexorably bound to accounts of paramilitary killings. He shepherded scripts by Paul Muldoon, John McGahern, Anne Devlin, Frank McGuinness – and those films were all very different and distinctive. But Boyle really wanted to work with Alan Clarke, whom he revered, and it just so happened that what they did together emerged as the ‘Troubles’ statement to end them all.

Clarke and Boyle resolved to present a series of fatal shootings, with no context or dialogue or identifying marks. Clarke and John Ward figured out how and where to film these, like a sequence of short films, two a day. Once in the can they were laid end to end, ‘a remorseless way of presentation’, as Boyle described it to me. Clarke would re-jig the original running order, and he left out a couple of pieces he’d shot. But you can’t really imagine any other final cut of this film.

Some of the killings happen swiftly and starkly, on a doorstep, in a car-park or a petrol station forecourt. More breath-catching ones that build up anticipation and dread occur in a swimming pool and a municipal park. There’s no slack: each assassin shoots straight then makes their escape. But it does get steadily more upsetting. You start to watch each new scenario and think, who is the gunman here, who the victim? Or from which edge of the frame will the threat appear? And can nobody escape their seeming fate? That feeling is especially acute in the sequence where two gunmen, one with a shotgun, stalk a victim who makes a hopeless effort to crawl to safety after sustaining a leg wound. The final sequence – an enigma – depicts a man being escorted through a deserted factory to the site of his own execution.

It’s an obvious thing to observe that Elephant is a film about a ‘cycle of violence’, with that degree of pained futility about it. One or two commentators, I think, have linked it to a later endeavour, the great literary obituary of the Long War, Lost Lives (1999, ed. McKittrick et al); but then that book makes very clear that murder was something inflicted on over three thousand named individuals in very specific places, and that those people had life-stories of their own. The subject of Elephant, though, is just the process of cold-blooded killing; and your mission as a viewer, should you choose to accept it, is to ponder that subject – in the dark while the thing unspools, and in your head afterward once the lights have gone up.

For me it was certainly a thing to watch it and think about it one more time in Belfast, 28 years - but only a short walk away - from where it was made.
Posted by Richard T Kelly at 10:00:00 No comments: Links to this post