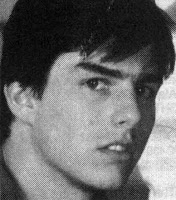 Y'know, I once sat in a booth at Trader Vic’s in Hollywood with Tom Cruise and Claudia Schiffer, inter alia. I hadn’t invited them to join me, it was my booth, I was just sitting there drinking Wild Turkey and I suppose I could have told them to sling it. Instead, it was me who crept away, left the great ones to their symposium... What I did notice – it was Awards Night next door, and Cruise had been nominated but came out empty-handed – was how exceptionally, avidly pleasant and enthused Cruise was being to everybody, especially winners; but then so companionable was the mood he made that maybe even a schlump like me could have stuck around longer…
On today’s Guardian my friend Ryan Gilbey writes about the inevitable usurpation of Cruise by Leonardo DiCaprio as Hollywood’s biggest male star. If you get to #1 the one thing you know for sure is you won’t always be there, but Cruise had an amazing run. DiCaprio is a brilliant actor and deserves every success. Cruise has done some good work in some good movies, but there are some notable offences in the oeuvre and the persona to consider also. What has to be respected is his work ethic. Ryan quotes adeptly from Sean Penn: His Life and Times, Sean talking about his work with Cruise on Taps when both were barely out of their teens:
"This was a guy who was ready for his chance, no question about it. He wouldn't have known that himself – he was second-guessing everything all the time. But that didn't stop him from committing when it was time. Cruise was so . . . like he was training for the fucken Olympics. I think he was the first person I ever said 'Calm down!' to..."
Posted by Richard T Kelly at 05:30:00 No comments: Links to this post

YouGov rates Labour: as you were, then

Richard Darlington clearly has an important role at Demos but I don’t know whom he thinks he’s admonishing with this piece at Labour Uncut, wherein he laments a YouGov poll suggesting Labour is now thought ‘‘weak’ (73%), rather than strong (16%) and ‘divided’ (72%), rather than united (19%)’, also ‘out of touch’ and representing ‘‘the past’ rather than the future.’ That’s just what happens when you lose after 13 years in power, your beaten leader resigns, and you slouch over to Opposition benches, usurped by both larger parties that formerly sat there. No Labour leader could reverse these shallow, obvious perceptions right now, even if he or she were indubitably the one to lead the party to the new policy dawn Darlington rightly hopes is coming, but only after what will first have to be a long, slow dusk. Frankly, as an admonition I prefer the simple formulation of the Sun's "disenchanted Labour voter" cab-driver Grant Davis (46): "Whoever wins is going to have a massive job on their hands making Labour electable again." Grant is for Andy Burnham, as it happens, but that's a reasonable position to hold, if not my own, as you know...
Posted by Richard T Kelly at 04:48:00 No comments: Links to this post