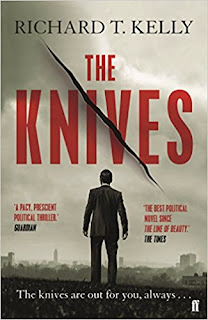 There was much rejoicing round mine back in 2016 when The Knives was a New Statesman Book of the Year pick; and I can’t say I was any less thrilled last week – reader, I opened a bottle – when the great David Hepworth (he of Smash Hits, Whistle Test, Mojo, and the author of several superb pop-cultural books including 1971) selected my defiantly not-yet-past-it novel as his best read of 2018. A big thanks owed to a writer I admire hugely.

In doing so Mr Hepworth also gave voice to a question that must surely have burned in the hearts of millions during the run of the BBC’s big drama smash of this year... Sadly, I know the answer. The people who make TV dramas are very smart people with a pretty sure sense of the audience for whom they're spending all that money in order to entertain grippingly from week to week. The relationship between my fictional Home Secretary Blaylock and his close-protection bodyguard Andy Grieve is vital to The Knives; but never in a million years would it have occurred to me to rework that relationship as a study in male-female sexual tension.

Also, since I believe our elected politicians are rarely much better or worse in nature than we the people, I suspect I'd struggle somewhat to render with any conviction the power-corrupts dynamic that drives the majority of political thrillers made for film and TV.

Me for BBC Radio 4 Open Book: "Why put real people in novels? What gives you the right?"

Literary platforms don’t come lovelier than the column slot on BBC Radio 4’s Open Book with Mariella Frostrup, and the other week I took a turn on the subject of putting real people into novels: Marx, Freud, Tom Cruise, Tony Blair, Emperor Hadrian, Her Majesty... Many thanks to producer Ellie Bury for inviting me in. You can listen to the programme on iPlayer here and my slot is from 08:31-12:40. My text is pretty much as below:


If you call yourself a fiction writer, why put real people in your novels – rather than characters you’ve made up, whom you can claim as your own inventions? What gives you the right to appropriate the lives of others?

Well, for starters you might say that storytelling – from Homer’s time, to Shakespeare’s, and ours – has relied hugely on the compelling lives or legends of people who actually existed. And fans of historical fiction expect – even demand – the special pleasure of meeting historical figures on the page.

We all enjoy novels that mix famous individuals with fictional ones: Sigmund Freud treating Sherlock Holmes for cocaine addiction in Nicholas Meyer’s The Seven-Per-Cent Solution; Karl Marx encountering a serial killer in Peter Ackroyd’s Dan Leno and the Limehouse Golem; Mohandas Gandhi popping up as a Boer War stretcher-bearer in Giles Foden’s Ladysmith. Cameos of this kind, short and sweet, play cleverly on one or two things we know for sure about eminent figures of the past.

But what about fictionalising figures of the present day? Tom Cruise might have been un-amused to see a version of himself in Bret Easton Ellis’s American Psycho, making small talk in an elevator with Ellis’s murderous protagonist. But, as far as we know, he made no fuss. I gave the young Tony Blair a walk-on part in my novel Crusaders, and I’ve never heard from the former PM’s lawyers, so presumably my imaginative work didn’t amount to any slur on Blair’s reputation.

Many writers evade a debt to the actualité by creating composite characters, amalgamated from various traits of assorted real people – who, like Frankenstein’s monster, leave no identifiable fingerprint. That method runs into trouble, though, if any reader can spot the unmistakable shape of one real person – as when the poet Stephen Spender read David Leavitt’s historical novel While England Sleeps and saw a character based all too clearly on passages from his own memoir, World Within World.

So, this is risky ground for writers; and some might say that any intermingling of fact and fiction is an insult to historical truth. I began by asking, what gives a novelist the right? Marguerite Yourcenar, author of the masterpiece Memoirs of Hadrian, argued that a novelist possesses a mysterious faculty – she calls it ‘sympathetic magic’ – to enter the minds of others. But that won’t stand up in court against a charge of libel; which is why the wisest course for a writer still is to wait until the person they want to write about is no longer with us.

Strangely, the public figure of our time who seems above all to defy that wisdom is Her Majesty Queen Elizabeth. We’ve seen the well-known dramas of her reign depicted in Peter Morgan’s movie The Queen, and his TV serial The Crown. But Alan Bennett, in his story The Uncommon Reader, was so bold as to transport himself into the Queen’s head for a fanciful tale of how she discovers the joys of promiscuous reading by way of a mobile library parked in the grounds of Windsor Castle. In Sue Townsend’s The Queen and I, the monarch suffers the indignity of eviction from the Palace by a republican government and has to eke out an existence on a sink estate in the Midlands.

Of all people to find themselves so persistently fictionalised – why Her Majesty? Is it because the Royal Family, famously, ‘can’t answer back?’ Or because the Queen recognises her likeness in these fictions? Or, that she simply doesn’t care? Whatever the truth – as a fiction writer I must confess, I rather wish there were a few more like her.

For Critical Quarterly - 'Brexit in fact and fiction: a few first drafts of history' 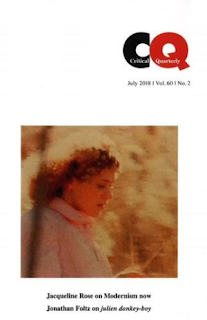 Nice to be back in the pages of Critical Quarterly – Volume 60, Issue2, July 2018, to be precise – with my essay on Brexit and fiction first presented at the University of Northampton in 2017. I set the scene like so:

“The EU referendum result split the nation near enough in half; defenestrated a Tory Prime Minister; confounded the ambitions of more than one of David Cameron’s putative successors; and, within a year, had created the conditions whereby a pension-aged Trotskyist with a career-long disdain for the European ‘project’ could entertain a real hope of leading the largely pro-Remain Labour party into government. As dramatic material this is worthy of Sophocles or Shakespeare. The challenge for writers of fiction, a perennial one, is whether or not they can improve on the facts already known by way of an imaginative treatment; or whether the facts are simply richer, stranger and more compelling when simply recorded in plain words…”

Writers & Intellectuals on Britain & Europe, 1918-2018: A conference at Northumbria University


Always a pleasure to be in Newcastle, especially so for me a couple of weeks ago when I attended the Northumbria University conference 'Writers and Intellectuals on Britain and Europe, 1918-2018,' convened by Dr Ann-Marie Einhaus.

I had a couple of speaking functions to perform: first on a panel called ‘Writers on Britain and Europe now,’ chaired by Bob Eaglestone from Royal Holloway University, where I exchanged views with Fiona Shaw, Mark (‘M.G.’) Sanchez and Kristian Shaw;  and then in a session entitled ‘Novelists on Brexit’ (chaired by Barbara Korte of Albert-Ludwigs-University Freiburg, alongside Mark once more, plus Ina Habermann of the University of Basel, and this time I delivered my paper: ‘“We must suffer them all again”: Political fictions and their debt to “past experiments”’; I took my texts from Auden, Brecht and Anthony Wedgwood-Benn.

A fascinating day in all; I met some terrifically smart people; I hope to publish my paper in due course; and some of my contributions to the first panel session were captured pretty faithfully on Twitter as below. 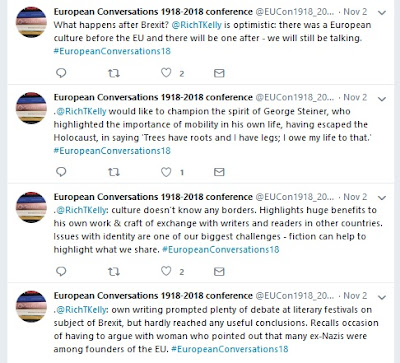 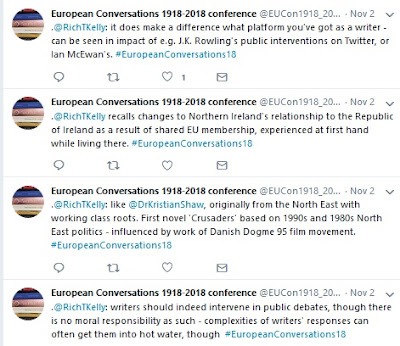