NUFC: Playing for pride, but quite knackered

A sluggish return to points-winning ways for the lads today. A week ago we'd have been fancied to give Plymouth a good hiding. A month ago you'd have got short odds against Amobi hitting six. Tonight we'll take 3-1 and forget about it, cheers.
But the lessons of the midweek Blackpool loss keep coming. We can scarcely afford to be more than one man down at any given time. Only a pair of central defenders to spare (though I'm not sure where the Georgian lad newly loaned from Blackburn is meant to fit - I'd be as concerned for the want of a lefty other than Enrique, frankly.) The midfield showing its age in Butt, its shortage of puff in Nolan and its utter lack of moral fibre in Barton. Upfront, much as I'd love us to start Carroll and Ranger every game, I'd be biting my nails for fear of some rash gadgy going into the back of either. Lovenkrands went straight into the XI today but was clearly off the pace and got stick for it from half the team, it seems. Guthrie and Ranger ought to have started, really, but since they came on as subs and did what they did for the second goal instantly then nee point harping about it. And the mighty Andy Carroll might have had a five-minute hat-trick at the death, but we'll take the one he lashed in, for he seems to be getting into his stride, albeit so long as there's someone faster and tricksier playing off him.
West Brom looked good today in their crushing of the Smoggies but we've already been round theirs and had a point. So with our best first XI week in, week out, and a fair wind behind us, we could bank on one of the automatic leg-up places. But, this being the Toon, I can say only that I'm not thinking about relegation anymore.
Posted by Richard T Kelly at 16:42:00 No comments: Links to this post

Handel, Simon Cowell’s Fortune, and The Strange Business of Talent 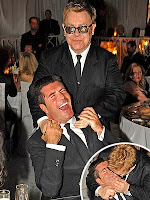 Watching a performance of Handel’s Samson broadcast from the Proms a few weeks back, I found something very suddenly affecting about the wealth of musical talent on display – not just the obvious superbity of the vocal soloists and choir, but the discipline and discernment behind every instrument in the orchestra, the concertedness of the performance, even the acting qualities of the singers, something I usually find obstructively deficient in opera.
On this business of discipline I got to thinking about what Sean Penn once said to me about why, as a young aspiring actor, he had been so inspired by Robert De Niro:
“Primarily because – besides that he was great in the films, and the films were also great – one was aware of the discipline that he had and the commitment to what he did. That was inspiring. It’s something I associate with ballet: I don’t particularly like the aesthetics of ballet, you know, but when you see a great dancer and you know the sacrifice that went into it – that is moving to me."
The same goes for that Samson by the English Concert and friends. Britain has indeed got talent.
Now then: I’m going to try to be self-critical, to speak as one among fellows in society, and assume that all of us (or a goodly proportion of us) must be held responsible for making Simon Cowell a ‘star’, and probably the best-remunerated person on television. We the people have gifted him his success, and that of his TV-talent-show protégés. What have we got back in return? Hours of listening/viewing pleasure? A deeper insight into precisely whom in Britain has really Got Talent? You tell me.
The more I think on it, the more extraordinary I find Cowell’s achievement. Here are a bunch of shows of his that urge the public at large to come along and live the dream that they could be somebody, so assuring a huge turnout of auditionees, most of whom are then, for the purpose of entertainment, subjected to sneers on the theme of ‘Whatever made you think you were anything?’ I can think of few sights on telly more loathsome that Cowell’s patented leaning-back roll-of-the-eyes. And yet this is the gleeful, sadistic ‘Gotcha!’ hit that X Factor fans can’t seem to live without.
Eventually the series proceeds to its business end, the serious stuff of selecting the acts over whom the judges will fawn or else advise with tough love on how best to shine. And what exactly are the bona fides for Simon Cowell’s powers of discernment when it comes to talent? The acts he has nurtured toward pop glory? Sinitta, Sonia, Five, Westlife, Robson & Jerome, Ultimate Kaos? No, don’t tell me – Leona Lewis?
Amid the latest blanket coverage of the latest Beatles reissues, there was room for a dissenting voice, and yet I only heard Robert Elms put the Case Against as badly as it could be made by comparing McCartney’s vocal on Let It Be unfavourably with Aretha Franklin’s later cover version. Let’s not make the best the enemy of the good, eh? What we should do is compare Aretha Franklin to Leona Lewis. The annihilation that would follow would be good for the general ecology of talent.

Meanwhile, I hope for its own sake X Factor never inflicts on us another show where the contestants line up to do Beatles covers, as this spectacle is all too gruesome a reminder of how once-glorious British pop music has sadly regressed to the pre-Lennon/McCartney era of slimy impresarios packaging hits for kids too hormonal to know better.
Posted by Richard T Kelly at 16:57:00 No comments: Links to this post