It's rare enough on these TV 'talent' shows that the most interesting and authentically promising talent should make it through to the final rounds, much less be successful in the final reckoning - hence three cheers for Danielle Hope.
Posted by Richard T Kelly at 17:14:00 No comments: Links to this post

The June 2010 'Sports' issue of Esquire has been on stands a fortnight, and includes my penultimate film column for the mag, a write-up of the new documentary American: The Bill Hicks Story. I'm a big fan of Hicks, honest Injun - yet it occurs to me that anyone reading the Esquire piece might not believe it. I daresay I sound a bit iffy, a bit niggly. In part that's what an 800-word ceiling does to you: the nuance is sometimes lost, other times a great swathe of what you might really want to say simply doesn't fit. But on reflection I think I spent too many of those 800 words having a mild and pointless dig at the cult of Hicks. I do think his work has inspired too many glowing estate-approved documentary products, too many bad rock songs, too many slackly-assembled biographies. And he is one of those comics who are so great that they can leave their admirers parroting the material like scripture... But, whoah, whoah, what am I saying? There I go again... The main fact is, Hicks was a genius comic, and he died too soon - they shouldn't die, people like that. End of story.
David Letterman is quite a funny man too, if a rum cove at times, and he made himself something of a villain in the Hicks legend, by cutting (on grounds of 'taste' and network sensitivities) what would have been Hicks' final TV stand-up spot from his Late Night show in 1993. In 2009, Letterman invited Hicks' mother Mary onto the show, to apologise for his original misjudgement and loss of nerve, and to debut and showcase the previously excised Hicks performance. It's on YouTube, and is of course hilarious. But below is Letterman's opening apology, which I find very moving, in spite of the audience's uncomprehending chuckles.

How Impress the Working Classes of England? 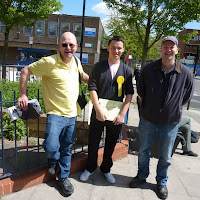 I spent the daylight hours of Election Day just gone doing a little bit of footwork on behalf of my brother David’s attempt to be elected a local councillor under the Liberal Democrat banner in Holloway ward, Islington. (En route to the morning shift I’d called into my elder daughter’s school and voted Labour across the board for Hornsey & Wood Green, so I felt I had both my family-over-party principles and my general karmic wellbeing in good order.) The photo above is a small souvenir of an interesting day, David and I with another of his friendly volunteers of the day, Kenny.
David polled an excellent 1940 votes, every one of them earned by his own hand and, evidently, on account of his good works in the locality over recent years. But in the end – and this became clear during the day – Labour had got its usual vote out with extreme efficiency, and their three councillors were returned, as was their local MP Emily Thornberry – one of the night’s dearly-fought prizes for Labour. In fact, this was rated one of the party’s model campaigns of Election 2010, as evinced by much post-mortem analysis, such as this from Jessica Asato at LabourList:
“In Islington South, voters weren’t swayed by the Cleggmania which was expected to grip the seat. Instead, the years of community campaigning by Emily Thornberry paid off, combined by assiduous door to door contact - the mountains of literature which the Lib Dems used failed to sway the electorate… There are other explanations for the victories in these seats - not least because most of them were metropolitan, and some of them had larger than usual ethnic minority populations. But we can't underestimate the impact of full time campaigning which they embraced.”
Interesting, as always, that 'metropolitan' and 'ethnic minority' remain coded Labour still. Moving on, Chris Smith made this bolder assertion on the New Statesman blog:
“Labour London… has created a formidable fighting machine and is buoyed by election results thought impossible a year ago. It is the kingmaker that will decide if David Miliband will take over… The political map of the capital now has a solid core of red. It controls eight more Labour councils, having gained more than 180 councillors. Westminster seats were secured despite Ashcroft cash; the party held Hammersmith - home of the Conservative easyCouncil project – plus Westminster North and Tooting. And it won the marginals of Harrow North and Enfield.”
London, maybe... but the South East is back to being a big headache for Labour, indeed Southern England more generally. John Rentoul offered the following dose of salts:
‘A correspondent emails with the numbers. Total number of seats in Southern England excluding inner London: 220. Total number of Labour wins: 12 (5 per cent)..."
The enigmatic James Purnell develops this thought in the Times today:
“Labour’s voters showed [their] party a lot of love on May 6. Despite everything, the core vote came out. People voted Labour in inner cities. There was even a swing to Labour from the Tories among ABs. But there’s bad news too: an 18 per cent swing to the Tories among C2s. The list of lost seats reads like a weekend supplement on holidaying in Middle England — Hastings, South Ribble, Worcester…”
I find myself a bit troubled by the pat-ness of this 'C2' thing (the 'A' and 'B' thing too.) Liam Byrne was going on about it in the Guardian the other day too, and some commenting reader asked if he calls people ‘C2s’ to their faces? It was only this morning that I decided to check out for myself how these famous social grades are properly defined. I found the following on Wikipedia, based on ‘Chief Income Earner's Occupation’ (though ‘living on benefit’ is counted at the bottom of the scale, while the upper end doesn’t factor in that layer of the upper class who don’t actually need to earn by dint of inherited wealth.)
A, upper middle class: Higher managerial, administrative or professional.
B, middle class: Intermediate managerial, administrative or professional
C1, lower middle class: Supervisory or clerical and junior managerial, administrative or professional
C2, skilled working class: Skilled manual workers
D, working class: Semi and unskilled manual workers
E, Those at the lowest levels of subsistence: Casual or lowest grade workers, pensioners and others who depend on the welfare state for their income
You don't hear politicians using those D and E terms too often, do you? And there's a lesson there. Were I a skilled manual worker (indeed, a skilled anything...) I think I’d be fairly narked to hear my political convictions and voting intentions being bundled into some tacky plastic carrier bag marked 'C2'. Purnell, of course, is not standing, cannot stand, for the Labour leadership, and Byrne is said to be making up his mind, but any serious candidates need to get this part of the rhetoric right, I reckon.
Posted by Richard T Kelly at 02:38:00 No comments: Links to this post