Newcastle United: No use taking 1 from a 6-pointer... 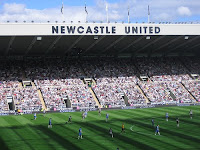 It was unglamorous Wigan Athletic who burst the brief bubble of Graeme Souness's tenure at St James's Park, beating us in both league and league cup at their JJB stadium during 2004-05, and proving that the long tail-off of Bobby Robson's final season was about far more than Bobby's declining energies. Such quality players as we had didn't perform when they had to; the poor ones (including one Titus Bramble) were too numerous as well as generally not up to it; and the truculent, tactically backward Souness wouldn't be digging us out of that hole. All of this, Wigan served to made clear: NUFC were back firmly among the mediocre, and looking behind them nervously.
Still, Souness didn't take us down, and nor did Glenn Roeder. Allardyce and Keegan didn't last as long as a full season. We'd never have guessed at that succession back in 2004-05, much less that Joe Kinnear would be in charge at the point this evening when we simply have to be a bookmaker's favourite to go down as one of three set for the old League Division Two come 2009-2010.
And what was the crowning misery of today's 2-2 draw with Wigan at SJP? I refer you to what I wrote back on August 30 after Arsenal (0-3 away), what now seems like halcyon days: 'That's the Toon for you, forever freely handing out good vibes to opposing teams and their fans - e.g. your ropiest striker who hasn't scored in two-dozen starts is nailed on for a brace against Newcastle, as is that hamstrung ex-NUFC player you have on your books...'
Titus Bramble, though? Last minute equaliser? Titus effing Bramble? This can only be the Devil's work. I see His dreadful handiwork all over it.
Posted by Richard T Kelly at 11:04:00 No comments: Links to this post 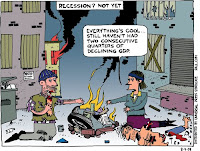 My paper of choice, the Financial Times, has undertaken a region-by-region prognosis of how old England is faring or liable to fare in this recession of ours. By the by, it serves to remind one of what we actually do for our livings in this country now – or rather, what we soon might not be doing.
This week, 1.82 million British people are officially unemployed. I’m old enough to remember two lurches past the 3 million mark, in 1981 and 1991. But it’s no time for complacency. One David Frost from the Chamber of Commerce recalls what the devastation of the early 1980s claimed on a more or less weekly basis (“It was 4,000 jobs here, 5,000 there”): this because those losses were in manufacturing, where there was so much to be lost. As the Tory economist Ruth Lea said elsewhere today, we don’t do so much of that anymore. The impact this time will be more – how shall I say it? – generously spread around the occupations. Still, you have to worry in particular about the car-makers. As of today even Germany is in recession, even though most people like a Mercedes when they see it. So one can foresee the English making do with whatever is their current ride for a while longer, maybe just giving the old banger a slightly more regular lather-and-vacuum.
London, where I live, ‘has the grimmest prospects of all’ based on its ‘heavy exposure to financial services and to the troubled property market.’ And without a regular diet of property transactions, what do accountants and lawyers and bankers do for their gravy? Clearly London bankers have already stopped buying great swathes of all that flashy shit that they base their lives around, with the inevitable knock-on effect. Meanwhile, Londoners are feeling less enthused – is that possible? – about the 2012 Olympics.
What of the two regions I know best: the North East of England and Northern Ireland? Both essentially sustained by the public sector, as it happens, ‘which gives them a degree of insulation from the turmoil’ according to Alan Wilson, senior man at the Oxford Economics consultancy. ‘That protection may, however, be short-term, as pressure on public spending grows...’ And a lot of ticky-tacky ‘luxury waterside’ box-flats in Newcastle and in Belfast are going to stay eerily empty for a good while longer.
Posted by Richard T Kelly at 15:42:00 No comments: Links to this post 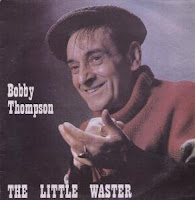 ... contra to yesterday's posting, as I've just been telt. So ye's'll need to find summat else cultural to dee in Newcastle come November 27. Unavoidable circumstances, apparently, but happily the whole shebang and the same billing will all just move to a date TBC in the new year. Which is great.
In the meantime, for those seeking alternative cultural entertainment of a North Eastern variety, on that evening or indeed any other, may I recommend the recorded output of Mr Robert Thompson, known in certain quarters as The Little Waster, no less?
Posted by Richard T Kelly at 15:17:00 No comments: Links to this post 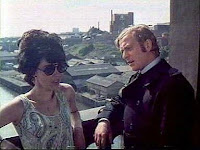 When Mike Hodges made Get Carter in 1971, he could have been reasonably sure the watching world would believe that the 'cultural offer' of Newcastle upon Tyne extended not much further than the Pelaw Hussars Juvenile Jazz Band. Of course, even then, NE1 had Morden Tower, the Hatton Gallery, Alan Plater, Sid Chaplin, Lindisfarne, and plenty more besides - though Sting still hadn't quite got himself going, career-wise, and the Sage and Baltic were not quite conceivable.
But, any road... a bit like that Jack Carter (only in fondness, mind you - nowt bitter), I've got a spot or two of business in Newcastle over the next couple of weeks: business that will see us on the train from King's Cross to Central Station and back more than once. (Used to be my very favourite journey, that, until National Express succeeded in making me miss Great North Eastern Railways... Still, unlike Carter, I trust at least that I'll make it back hyem okay.)
Them spots of business, then: I'm reading, (from wuh buke, Crusaders, y'knaa) - and alongside the Burra's Richard Milward and Hartlepool's Michael Smith - at a charitable music/books event called The Good Vibration on Thursday November 27 (large-file PDF flyer here); these literary bits being scheduled between performances by various popular beat combos. A new challenge for me, this - quite a thrill, and I hope I can manage to charm the popular-music-loving crowd without getting plastic bottles of urine tossed at wor head, or otherwise going down about as well as old man Lawrence Ferlinghetti at The Last Waltz.
And then on Saturday December 6 I'm doing a bit for the Northern Lights Film Festival, which I've been pleased to use and endorse since its founding in 2003. In that case I'll be chairing a panel called Shock Horror: How to make a low-budget genre film (3.30 – 4.30pm, Tyneside Cinema), the key text under discussion being the movie Mum & Dad, represented by Steven Sheil and Lisa Trnovski, its director and producer.
All welcome, as they say.
Posted by Richard T Kelly at 14:53:00 No comments: Links to this post 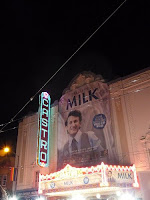 This blog has an unalloyed positive view of the life and works of Sean Justin Penn, based on wisdom dearly bought. So there’s not much point in my discussing the quality of performance, say, in Gus Van Sant’s new bio-pic of the slain San Francisco gay activist/politician Harvey Milk, which I saw last week, and in which SJP plays the lead. I would say, though, that you learn a lot about Harvey Milk and about San Francisco, and Milk is also very interesting about politics in general, and the issue of what political power could do for homosexuals in particular.
Milk was a true grassroots pol: he helped make the Castro ‘the Castro’, and made the pink pound work for the gay community there and not for anti-gay business. He was militant about the issue of being unabashedly ‘out’. Once Milk had consolidated San Francisco’s gay vote and got himself elected supervisor, the city mayor Moscone really needed him, and he could then make things happen. But he also positioned the gay movement as part of a broader progressive cause.
He was nice to lesbians. He was a passionate but unfussy and inclusive speaker. He had a good eye for a public interest photo-op, evinced by an unlikely campaign against dogs fouling pavements (which would get him elected in London too). And he got the Teamsters behind him – this stunned me, actually – by aiding a boycott of the non-union Coors beer company, and persuaded Coors to hire gay truckers in return. This is what you might call audaciously hopeful stuff. So you can see the usefulness of this movie getting itself released this month…
Posted by Richard T Kelly at 14:07:00 No comments: Links to this post 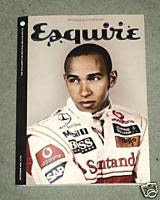 This month's Esquire is now available, and includes the long interview that I did earlier this year with David Peace and Gordon Burn, to which I have alluded previously, and in which I ask these two great English writers whether or not they believe in evil. (Can you anticipate what were their - markedly different - responses?) Elsewhere, my monthly film column is about La Silence de Lorna by the Dardenne brothers, Julia by Erick Zonca, and the previously mentioned Better Things by Duane Hopkins - three pictures that are worth anyone's time.
Posted by Richard T Kelly at 16:09:00 No comments: Links to this post