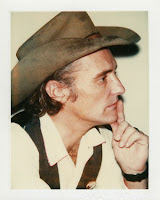 Adios then, Dennis. Back when I heard the sad news of his terminal illness I had already written what was, I suppose, a sort of obituary. Tonight, learning he was gone, just a couple of other things occurred to me. One is a funny opinion given me once by Los Angeles policeman Dennis Fanning, who was technical advisor to Hopper on his LA gang movie Colors:
"I didn’t think I was going to get along with Hopper. I figured Hop’s a drunk, a druggie, a sixties radical – all that shit... Well, I got along ****ing famously with Dennis. Because we had the same stories, we just came from different sides of the fence. But we played in the same ballpark - dopers, cops, crooks - we play the same game. It’s the ****ing civilians who are outside the arena..."
Quite. And then Hopper in his own words, after I asked him once about whether he felt an artist was in some sense obliged to spend time on the dark side of life, or of their own self. His reply:
"Well, I think anybody who looks at our society and decides they want to be an artist, they have to go down that path - I think. I don’t see another path. I’m sure there are others. But if you start with Edgar Allan Poe and go to Norman Mailer, or you start with Vincent Van Gogh and you go through Jackson Pollock, or you start with Dylan Thomas and you end up with Bob Dylan – it seems that the dark journey is for the young, and in some way they feel they have to purge themselves, like the artists of the generations before purged themselves. Looking for that perfect yellow… I always thought Van Gogh was too drunk to find the yellow. Couldn’t even find the tube, man. [Whereupon Hopper laughed his famous laugh.] Maybe he was mixing the yellow with absinthe..."
In short, life was too short to be a civilian... Hopper wound up wearing v-necks and playing a fair bit of golf, sure, but his 'dark journey' was longer and stranger and more venturesome than most would dare undertake, and so it was a good thing he came back. He walks on somewhere still, I hope...
The photo above is, of course, by Warhol.
Posted by Richard T Kelly at 16:38:00 2 comments: Links to this post

I’m not one of those Labour voters sitting about waiting for this Government to collapse under the weight of its own hyperbole and sanctimony, bearing down as these must on the jerry-built foundations of the Coalition. We are in a deep economic morass, and 'strong and stable' governance is indeed needed, by whatever constitutional means and political talents can be found. David Laws was, evidently, more than competent for a posting as Chief Secretary to the Treasury, but it’s now clear that circumstances should never have conspired in his favour, and for reasons further to those that first seemed obvious (i.e. those arising from the outlandish notion of Liberal Democrats in government.) No, what’s got Laws – as he must have expected, right up to his recent ramrod posturing for cameras and at the despatch box – is that paying out of public money in rent to a long-time companion, albeit in a relationship that Laws would otherwise have denied to the world if pressed to, in the strange conviction that this was his entitlement.
I’ve never understood why those 'Orange Book' Lib Dems didn’t just flounce off and sign up to the Tories, of whom they were natural kinsmen. The Coalition showed me, at least, that the ‘National Interest’ offered them a convenient cover to make that furtive dash across the floor. Laws, of course, was among the fleetest of foot in that respect. Now we learn that Section 28 was always a huge barrier for him in reconciling to the Tories. Well, not so big, as it turned out.
I expect Laws will get another ministerial job in time, if he wants it – that’s the usual way. Otherwise he could go back to the City, from whence he came. No-one ever asked him to serve the public weal, and had he applied for the job then most of us would have said ‘Obviously, first up, don’t join the Liberal Democrats.’
There seems to be a lot of sympathy about for the 44-year-old Laws’ sad, self-inhibiting refusal to let his family know about his sexuality; in any event, since everyone else in his life and around Westminster seem to have known Laws was gay he will, one trusts, feel better soon, not having to lie and fiddle around this key part of his identity. And maybe the risible Nick Clegg will now keep his pompous mouth shut for a while about the 'New Politics' (?!), and the Liberal Democrats’ crusading embodiment of same. Tonight that fundamentally white, well-heeled, curiously self-repressive shower of a party look older than ever, as if it were 1963...
Posted by Richard T Kelly at 16:15:00 No comments: Links to this post