The elusive essence of 'Conradian' 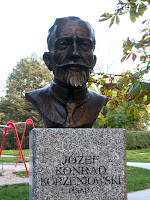 Over there on Faber Finds I've written a post on Joseph Conrad, whose marvellous A Personal Record (1912) Finds has made available between covers. I didn't mention Conrad's political disposition, which I usually never fail to point out in a writer, whether or not I care. (But Conrad was, of course, a pillar of reaction, with a bleak view of general humanity. Still, to his great credit he didn't - much - let that get in the way of his stories or deface his characters.)
I do say that there aren't any good film versions of his novels, and I daresay that remains the case: I never saw Mark Peploe's Victory despite wishing to, but then the whole venture was widely reckoned to be waterlogged from an early stage. Anyway, it's better, I think, that great novelists be undefiled by hopeless films; and Conrad's artful, atmospheric prose has often left admirers with cameras quite at sea over how to replicate that quality in images. Even one so gifted as Christopher Hampton, who has spent a fair bit of time engaged with this very difficulty, hasn't been able to crack it, as you may surmise from the trailer for his version of The Secret Agent (below).

1988 probably isn’t rated a banner year in the history of culture but I don’t think I’ve ever since read as many challenging books, seen as many slightly risque foreign-language movies, listened to as many Central European string quartets as I did over those twelve months. It was all to do with being 17, and the early stirrings of avidity for all things arty, the slight vertigo you get in starting to understand the real depth and breadth of what’s already out there in the world.
When you’re that age, though, you need encouragement, someone to give you a lead to follow. In this way I’m reminded of Nicholas Currie, the Scottish-born singer-songwriter who has for 25 years now written and recorded and engaged in all manner of superior cultural production under the name of Momus. In 1988 I discovered his early albums Circus Maximus, The Poison Boyfriend and Tender Pervert; and for a boy who was studying Ancient History, imagining what Japan was really like, and beginning to alphabetise his Penguin Modern Classics... well, it was a revelation to discover a songwriter who knew how to mix high culture, esoterica/erotica and intimate personal confession with such well-turned scurrility.
I wrote Currie a number of fan letters to an address printed on the back-sleeve of Tender Pervert, all of which he replied to very patiently and amiably, and the effect of all my gauche questions for him was that he pointed me in the direction of an awful lot of good reading and looking and listening that was hitherto alien to me. Certainly it was at his suggestion that I read Gide and Bataille, looked at Picabia and Dix, heard Schoenberg and Jacques Brel and The Threepenny Opera.
In the summer of 1990 I made a pilgrimage to the Edinburgh Festival to see a rare production of one of Mishima’s modern Noh plays, directed, if I remember rightly, by the great Yukio Ninagawa. I remember how not particularly surprised – though very pleased – I was when I clocked that Momus was sitting in the row in front of me. (Even in the dark his profile was very distinctive.) I went up to him afterwards and said hello – something of a miracle, as all through my adolescence you could hardly get a word out of me without using pliers – and he was very pleasant, as you want people to be when you’ve admired them from afar.
Momus has kept on writing and recording and getting up to all sorts. He blogs at iMomus. In this interview on YouTube he gives an interesting account of his career against the shifting backdrop of independent music labels over the last three decades. The promo clip below is a rather Neil Tennant-ish number that was probably the closest Momus came to a hit record in the UK.

Admirable professionalism from the Newcastle United team this weekend, carefully worded responses to media from Captain Nolan, and exactly the right response from the fans at the game – all the way to the final whistle and the segueing effortlessly from cheers for a top performance/three points to renewed jeers for that minty pair of toe-rags still squatting in the board-room of this club. The Match of the Day cameras kept looking for Ashley’s pie-eater grins, but the microphones must have been pointing the wrong way, i.e. not at the Leazes End. Memo to Ashley & Llambias: we wish most earnestly and urgently that you could live your dream, get shot of us and go catch your effing taxi. Yet you persist (like morons, really) in going quite the wrong way about making NUFC appear an attractive saleable entity. Thankfully there are some footballers at this club, many of them improved immeasurably under the management of Chris Hughton, and yesterday it was clear they were still playing for him. Moreover we were lucky it was Liverpool visiting: a club clearly in an awful lot of bother. Had it been Blackpool or Blackburn or Wigan, strangely enough, I expect we’d have lost. The next four games are looking tough, though, with Spurs and Citeh in the middle of the sandwich. Over to you then, Alan Pardew. Or ‘Sort it out, Curbishley’, as I believe some comic genius sat near the NUFC dug-out addressed the new ‘gaffer’ on Saturday...