I fully approved of the Plant/Page 'unplugged' revival c. 1994-5, in particular the strange, compelling Arabic/Celtic strains loaned to versions of 'Gallows Pole', 'Kashmir', 'No Quarter' and 'Nobody's Fault But Mine.' Still - and as I tweeted in response to Chris Rodley's excellent Plant doc for the BBC a fortnight back - whatever musical highways Plant or Page have honourably gone hitching down post-Zeppelin, there's unlikely to be anything there that could wholly compare to the glory of Gettin' the Led out. To wit: I missed the Plant/Page revival of 1998 and so was hugely tickled by the Rodley doc's digging out of their Later rendition of The Wanton Song off Physical Graffiti. Fifty-something geezers here, remember. Kids, you might want to duck... 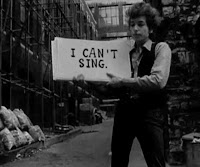 This year’s X Factor competition? I'm wishing success on the young black woman with the Liverpool accent, who has a very good voice – but more importantly because a fortnight back, if I heard rightly, she sang a Dylan song. It’s possible she knew it by way of its more popular covers, but I’d rather believe she was displaying a spark of musical intelligence and feeling hitherto unseen among X Factor wannabes and their ludicrous panel of 'mentors'/'judges'.
Granted, it’s a ridiculous notion, Bob-does-The-X. If by some magic the young Greenwich Village Dylan were a candidate for the c. 2010 show he’d be ridiculed and kicked out at audition - partly for the voice, which Larkin (who liked it!) thought ‘cawing’ and ‘derisive’, but mainly for writing his own songs, being an artist, his own man, etc etc...
Still, I’ve begun to amuse myself by imagining an entire X-evening devoted to Bob’s songs… just as I understand there have been tributes to such heavyweights as Elton, Queen, Take That, George Michael… Most likely the biggest scrap among contestants would be had over ‘Knocking On Heaven’s Door’, with the winner probably deciding to knock off the Guns N’ Roses version – whereupon one can picture Simon Cowell doing 'that pause' and pulling 'that face' (by which he tries to pretend that he is thinking impossibly complicated thoughts, thoughts for which language, even by his high standards, is inadequate) before saying that the performance was quite unprecedented in its brilliance and the X Factor just so great because it’s so much more than karaoke, blah blah etc.
It could be done, though: a whole night of X-Goes-Bob. One of the older contestants would do ‘Blowin’ in the Wind’ with a choir and get those arms a-waving in the crowd. One of the young lads could sing a new sort of number for the laydeez - maybe ‘Visions of Johanna’, or a quirkier choice, ‘Sweetheart Like You’ off Infidels? I’d expect one of the ‘girls’ who specialize in that vibrato thing they all do these days could bring a new stretched-out-ness to one of the ballads of the Christian phase – ‘I Believe in You’ perhaps. And there’d be a special prize for the claiming by any candidate who took on ‘Idiot Wind’ and strolled boldly right up to the judges’ table, spitting each syllable into their awful freeze-dried life-denying faces:
‘Idiot wind, blowing every time you move your mouth,
Blowing down the backroads headin' south.
Idiot wind, blowing every time you move your teeth,
You're an idiot, babe.
It's a wonder that you still know how to breathe…’
Posted by Richard T Kelly at 10:10:00 No comments: Links to this post

666: The realm of nasty numbers

At one point in his recent (rather interesting, distinctly personal) documentary study of horror films for the BBC Mark Gatiss sat down with David Seltzer, author of The Omen (hit novel and film), and put to him the big question: does he believe in the Devil? Seltzer wryly replied to the effect that if he did, then he wouldn’t for one moment have messed about writing books that presumed to speak of Him and His powers.
That’s funny, and fair enough. As Gatiss noted, Satan was a hot thing in 1970s Hollywood after the success of Rosemary’s Baby and The Exorcist. And Seltzer had a good nose for how to do something new and commercial with the Evil One. Of course there have been repeated and not wholly unfounded attempts to argue that various cast/crew members on The Exorcist were afflicted by a sort of curse in subsequent years. But it doesn’t seem that David Seltzer’s had to worry – has suffered no freak impalements or decapitations, rather, enjoyed the fruits of his labour, his imagination.
The Omen was on telly again the other night and I made the mistake of watching bits of it. God but it’s a thoroughly professional, expertly-managed, big-budget piece of depressing nastiness. (Seltzer was quick to tell Gatiss he felt Gregory Peck loaned a weight to the project that Charles Bronson - the original casting as the US Ambassador to the Court of St James - couldn’t have.) Actually I remember the film’s network TV premiere on ITV at some point in the very early 1980s. I’m sure I wasn’t allowed to watch it all but I saw enough to be feel a kind of outrage over a picture in which the baddies were so clearly being allowed to win.
Still, I must admire the gruesome effectiveness in places, and the power of the imaginative concept. I was talking to a filmmaker friend the other day about the Gothic-supernatural-steampunk trends in film, and apropos Guy Richie’s Sherlock Holmes (which we both admired hugely) he mentioned how much he prefers the sort of 'mystery & imagination' movie wherein events of a seemingly supernatural origin are later revealed to be in fact the cunning/fiendish works of man. With The Omen, you could choose to look at the narrative from a remote vantage and say that all those killings are just a chain of freak accidents and fatal misunderstandings, wrapped around a fat-cheeked piggy-eyed little 5-year-old boy... (That said, in the yet more laboriously nasty sequels Damian and The Final Conflict the maturing Anti-Christ took an active hand in murder, using sorcery to do so, so the game was up by then.) Still, such room for ambiguity may explain why the Polish sociologist Zygmunt Bauman once put his name to a paper entitled ‘The Exorcist and The Omen, or Modern and Postmodern Limits to Knowledge.’
Movies speak of their times and The Omen is unmistakeably the drear England of the mid-1970s, the sort of place where Satan might well seek admission to the affairs of men. (Just as The Exorcist is well located amid OPEC crisis/Watergate-era Georgetown.) Having stage-trained Brits such as Billie Whitelaw and David Warner and Patrick Troughton in the cast gives The Omen the faint air of a BBC 'Play for Today' or some gritty Royal Court production, though here the smart actors are employed only in order to be killed off in horrible ways. (The 2006 remake of The Omen was also on telly last week, and I couldn’t face it, assuming it was done purely to cast younger leads and find more hi-tech ways to kill smart actors – Pete Postlethwaite, David Thewlis etc – horribly.)
In fairness to The Omen, it bravely makes no effort to endow Satan and Satanism with any sort of perverse allure, any suggestion of luxurious darkness or forbidden pleasure in the act of pledging one’s soul to Satan. You just have to take in on trust that Billie Whitelaw’s Mrs Baylock is committed to the Anti-Christ just as some people are to Labour or the Tories. She wants a strong leader in charge and she’s grimly prepared to roll up her sleeves and do the dirty job of getting him there, shoving people out of windows if needs be, though it’s hard to see what will be her personal reward for same. In Damian, sequel #1, Lee Grant is burned to death shortly after murdering her husband in a misguided show of loyalty to Satan’s son. In The Final Conflict, as I recall, a whole network/cabal of suburban English salarymen and housewives were revealed to be in joyless thrall to the Deceiver. And that's a powerful dramatic idea, one that allows a dramatist to reveal any character as being, quite suddenly and without apparent motivation, capable of the most appalling/malevolent act. Nasty, as I say...
Posted by Richard T Kelly at 15:42:00 No comments: Links to this post