Bresson vs Mailer on the Meaning of a Bad Day 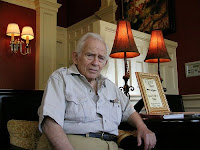 For a lot of years, and most especially on days when things aren't going so well for whatever apparent reason, I have treasured this comment of Robert Bresson's from his bracing little book of aphorisms, Notes on the Cinematographer. To wit:
"These horrible days – when shooting film disgusts me, when I am exhausted, powerless in the face of so many obstacles – are part of my method of work."
That's the spirit, I've tended to think. Don't fight a prevailing ill wind too hard. Accept that at certain hours the odds just aren't in your favour. Regroup and fight again tomorrow. See it as all part of the process.
But another of my heroes has just made me think again on this matter. Yes, Mailer, and in the course of the Q&A book On God as mentioned below. Insofar as I take the idea of karma seriously, as some objective accounting of our daily bravery and goodness or otherwise, which may have repercussions for us in a life to come as it has from some previous lives - I do so only because of Mailer. He always insisted that something spiritual was at stake in every instant of our lives, however seemingly banal and quotidian. And inevitably this led him to an integrated theory of Bad Days too, to wit:
"Whenever you have a bad day, there’s a lot of reasons for the downer. I can give you twenty causes for such an hour. Some are serious, some are passing. But, no, I won’t let you hide behind the notion that a bad day is no more than a slot on the roulette wheel… Whenever we have an emotion we can’t account for, good or bad, I expect that the root is karmic… Intense and unaccountable emotions can come from one’s karmic past."
So - I'm going to have to think this over anew. Does one give the devil his due if only for 24 hours? Or fight the devil at all times and all costs? Even when having a cup of coffee, or waiting in for a tradesman to call...? Some of Mailer's examples in On God are only marginally less bathetic. But I know what he's driving at.

Don't Shoot the Messenger, whether from Helmand or Arkansas

By a little and a little in this life I have learned to read and engage with the arguments of writers and commentators I was formerly inclined to disagree with on sight. This is no great achievement, of course, but I think it's been good for my health. Max Hastings was much too Establishment a figure for me in the 1980s and 1990s, but having begun to read some of his military history I'm much the better for it. This piece of his on the British mission in Afghanistan is for the Daily Mail, which is a different sort of Health Warning in itself, but it also reflects a substantive body of informed opinion, and while I wish the facts therein were otherwise, sadly they feel like facts nonetheless.
Then, to sink right below the waterline of decency... Dick Morris is someone I can't find an excuse for, but this Republican spinner/strategist was certainly made more than welcome in the Clinton White House, and as I recall he had no bigger fan than the Lady of the House. As such, the Devil knowing His own, I'm sure Morris's reckoning of Mrs Clinton's current schemes and motives is correct or near-as-dammit.
Posted by Richard T Kelly at 03:31:00 No comments: Links to this post