All the Colours of the Town by Liam McIlvanney 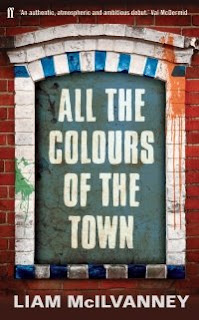 A little while ago I had the good fortune of reading a marvellous new novel in manuscript, and I see that it's now forthcoming from Faber in a paperback original this August. It's the debut of a young writer called Liam McIlvanney, and it's entitled All The Colours of the Town.
Its protagonist is a grafting Glasgow-based political journalist called Gerry Conway who covers the waterfront of the Scottish Parliament, and is always quids-in for a good tip-off from a fictional Holyrood Justice Minister by the name of Peter Lyons. The complications and the drama really get going when Conway realises there's a big story submerged in Lyons' own unsavoury past, the hunting down of which will require him to get on a plane across the Irish Sea to Belfast (an unlovely and yet highly evocative journey, with which I'm highly familiar.) And in Belfast, that city under a black mountain, all the dirty secrets are there for Conway to dislodge with the toe of his boot.
To my eye, McIlvanney holds all the aces of a really vital young novelist: he tells a story with a sure hand, his recording eye is vividly precise, and he has his boots planted firmly in the moral mire of real life. All The Colours... offers the reader not only all the pleasures of a page-turner with compelling crime elements; but also a brilliant study in the harsh, pawky affinity between those two majestic cities, Glasgow and Belfast. Leading us to and fro across the Irish Sea on the trail of political/paramilitary skulduggery, McIlvanney manages both to keep us in his grip and to capture exactly what he calls the ‘fearsome Prod foursquareness’ of Ulster-Scots manners and mindsets. In short, and on the strength of all the elements sketched above, this is a book I'd very much like to hear the great Tom Paulin talk about on the Newsnight review show, to which Tom now seems to have returned after a much-lamented hiatus...
Posted by Richard T Kelly at 03:17:00 No comments: Links to this post

At work this morning on my screenplay Lucie Gunn I start to feel the need for mood-musical accompaniment. Too much of that aggressive masculine guitar in the house lately. What about the women? Lucie Gunn is a Code: Female sort of a script, for sure. And I think I know the kind of souls I need to help this one to sing...
Maria, for certain. It's now become a truism that her 1996 album Life Is Sweet, the one that severed her relations with Geffen (see Peter Case, below) is one of the great 'lost' rock albums of its decade. It still sounds disturbing to me today, though I understand Maria's rather more content these days. This live performance clip reminds me of seeing her at the Shepherd's Bush Empire that same year. She wore the same dress, made the same brilliantly anguished noises on guitar.
Now then, Tori... When she first became a Hot Thing c. 1992 I couldn't quite follow her, and not just because of her vocal stylings - or maybe it was her fanbase that was deterring. But she certainly kept going her own way - for all her imitators there is no-one quite like her - and To Venus And Back (1999) is unquestionably one of my favourite records. The new one, Abnormally Attracted to Sin, looks fairly enticing too, as does this live performance of one of its cuts.
Posted by Richard T Kelly at 05:21:00 No comments: Links to this post