A theme of this year’s BBC Proms has been 'Unfinished Work', which makes rich pickings for anyone interested in the discerning matter of artistic decision-making, branching histories and all the things that might have been had we but world enough and time.

I had the great, great pleasure of participating in a BBC Radio 3 Proms Extra discussion last Friday at Imperial College Union, hosted by Shahidha Bari with consummate readings by Tim McInnerny. The whole was expertly boxed by producer Simon Richardson into a 20-minute extract broadcast at half-time in that evening’s Prom concert. You can listen here, between 24:14 and 44:26, if you're subscribed to BBC playback services, and if not then the procedure takes a mere moment.

What is the principal allure of the unfinished? In his Natural History, Pliny the Elder wrote feelingly of how ‘the last works of artists and their unfinished pictures’ can be ‘more admired than those which they finished, because in them are seen the preliminary drawings left visible and the artists’ actual thoughts, and in the midst of approval’s beguilement we feel regret that the artist’s hand while engaged in the work was removed by death.’

Writers may die too soon even today but, generally, later than they used to. There are other intriguing reasons (excuses?) for not finishing. Writers can be very tough judges of their own output, never truly satisfied. They may come to find in their hearts that they should never have started the work in the first place, because they didn’t really know how to finish it – didn’t know, in other words, what the book was really about. But in the cases of writers of distinction the incomplete manuscript offers a privileged look inside the workshop and the writer’s struggles to fashion the raw material: our imaginations are piqued by the great unknowable of where we might finally have been transported.

One or two things I might have added to the broadcast, world enough and time etc:

- Another aspect of Ralph Ellison’s labours over what we now call Three Days Before the Shooting... is that some part of his inspiration was the hugely charged ‘moment’ in American race relations circa 1955, Brown vs. Board of Education etc; but that 'moment' just kept moving on, and Ellison couldn’t be uninterested in the real-world real-time transformation of his nation. It did, though, prevent him perhaps from getting fully astride of his material. If you want to write about the times you’re living through, it can be a helpful idea to pick a fixed moment from the recent past – five to ten years ago, say? – and to stay there.

- A chat about Kafka and The Castle had to be sacrificed for time, and I doubt I said anything new, other than maybe that, on the subject of perfectionism, all writers could do with being as hard on themselves as Kafka was. (Of The Metamorphosis, one of the few works he proposed to spare incineration, the most Kafka would say was that he was ‘not unhappy with it.’)

- Of Scott Fitzgerald’s struggles in writing film scripts, which gave us no cinema of note but a half-dozen chapters, at least, of The Last Tycoon – I still get a smile from Joan Crawford’s famous attempt to encourage him during those fruitless months at MGM: ‘Write hard, Mr Fitzgerald, write hard!’ This is kindly, hopeless advice. Either the stuff wants to come out or it doesn’t – willed exertion levels have little or no purchase in the matter.

- Any discussion of Jane Austen’s Sanditon leads one to the thorny business of other writers, or scholars or editors or friends, trying to finish an uncompleted work by unauthorised proxy. This to me is so inherently flawed an enterprise as to seem fatal. The most gifted mind you might summon to such a task is only going to make educated guesses at forbiddingly hard-to-know intentions. Notes and diagrams of the sort that Fitzgerald left behind don’t begin to say how the job ought to be done. Only a literary talent as large as the one who left the scene could conjure the sorts of sparks that come from self-editing and rewriting.

Marguerite Yourcenar, in her magisterial monograph on Yukio Mishima, puts it best in addressing the question of whether Mishima truly completed his Sea of Fertility on the morning of his suicide (per legend) or actually on his summer holidays a few months previous:


‘ ... to finish the last page of a novel does not necessarily mean that this book is done: a book can be considered finished only the day it is put in an envelope and sent to the publisher... it is finished the moment it definitively separates from the vital placenta where books are conceived...’

Keegan, Dalglish and a podcast with Matt Williams

Broadcaster Matt Williams – Lancashire-born, I believe, and reared near Liverpool – is the man who expertly handles the sport on the Simon Mayo Radio 2 Drivetime programme, and who, moreover, does a great service to those of us who write books about sport by hosting a regular Sports Book Podcast in which he crafts a really considered platform for an author to explore with him the themes of the work in question.

Late last month Matt kindly gave me a slot in which to talk about Keegan and Dalglish: how their playing and managing careers intertwined, why both players at times stood apart from their teammates, the famous debate of whether Dalglish's talent was innate while Keegan had to work at his – it’s all there, man. You can listen to it here.

Matt was particularly amused by an anecdote in the book related to Gateshead’s own Lawrie McMenemy, who is, by all accounts and evidence, quite a witty man. Here’s the text in question – it relates to Kevin Keegan’s desire, circa early 1980, to move from Hamburg, back home...:


Keegan was thinking seriously of England again, above all for family reasons, but also thanks to a cheeky punt in his direction ventured by Lawrie McMenemy, affable manager of Southampton, who called Keegan in Hamburg with a friendly enquiry about a special German variety of light fitting. McMenemy, in truth, was merely fishing for a way to sound Keegan out about moving to the Saints. They had won the FA Cup in 1976, had been finishing decently in the league, and McMenemy was assembling a squad of young bucks and veterans who could still do a job: Mick Channon, Alan Ball, Dave Watson, Charlie George. McMenemy let Keegan know all of this fascinating stuff in hope that he might appreciate the special challenge of a ‘smaller club.’

In fact, for reasons McMenemy could only have half-guessed at, his offer ticked most of Keegan’s boxes. Keegan agreed to take a meeting in London at the loaned house of a Saints supporter; McMenemy’s finance director Guy Askham also attended and brought a contract along just in case. To their amazement, Keegan signed it. McMenemy stayed on in London to watch Keegan run out for England at Wembley against Ireland, tickled by his private knowledge that the England captain was now a Southampton player. Keegan scored both goals, superbly, as England won 2-0. McMenemy continued to keep his £420,000 signing completely secret until the following week when he invited press to a conference suite at the Potters Heron Hotel in Romsey, on the enticement that they would get to meet someone with ‘a big part in the club’s future.’ Into the suite strode Keegan, fresh off the plane, and well pleased by the matinee performance McMenemy had made of it all.

Keegan, Dalglish, and all the money in football 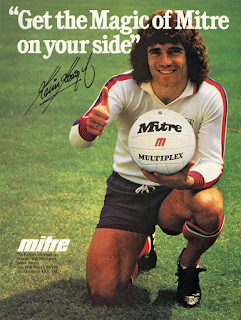 Most interested to read this piece by top commentator Chris Deerin for the new-start website Unherd, in which his account of the what-we-might-conceivably-call 'financialisation' of football becomes almost dizzying to people of my vintage who grew up with such a different game (albeit one in which Kevin Keegan seized on all of the limited opportunities then available for players to put money in their purses - see the illustration to your right, one of many lovingly curated at the witty nostalgia website Who Ate All the Pies?)

I'm reminded that when Newcastle United FC floated on the Stock Exchange back in 1997 its share-flogging brochure cited the club's primary activity as (I paraphrase) 'selling the rights to watch football matches.' As long as the customers are there - wherever they are, i.e. whether or not in such numbers through the turnstiles as once was - the money is liable to remain as bizarre as it is.

Such vertiginous sensations about the sums sluicing through the sport were, of course, a point of departure for my Keegan and Dalglish, which is kindly cited halfway down the Deerin piece: 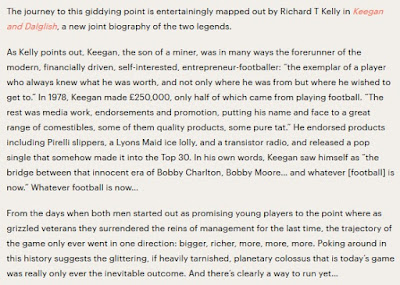