Robert Downey Jr is Esquire's cover star this month; and approximately a million times better a cover star for a mens' magazine than, just for instance, Simon Cowell. Downey has had an incredible Hollywood comeback from a low, low ebb. Like Sean Penn he's an alumnus of Santa Monica High School, and the two men are friendly, as Penn tends to be with most of the really brilliant American actors. Back in that extended narcotic blue period Downey said of Sean, ‘I remember him saying three or four years ago, “You have two reputations. I think you know what both of them are, and I think you’d do well to get rid of one of those reputations. If you don’t, it will get rid of the other one . . .”’ Well, the other one turns out to have outlasted the first; Sean is one of those Friends of Robert who aided that process.
My film column this month is about Sam Taylor-Wood's absolutely glorious Nowhere Boy, of which I say it 'is probably a softer-edged piece than the facts of this case would suggest, for it offers us a certain closure; whereas the real Lennon (who, aged 30, wept through primal therapy with Arthur Janov, then wrote the anguished ‘Mother’) clearly took longer to find his peace. Movies, though, are more like myths than analyses, and they have a duty to get us to catharsis in a shorter time-span. Certainly I sobbed throughout the last reel of Nowhere Boy. Bouquets, then, to Taylor-Wood, her cast and crew (not least the brilliant cinematographer Seamus McGarvey) for a lovely, lyrical picture that flows – one should say ‘swings’ – just as bitter-sweetly as the rock ‘n’ roll that Lennon and friends invented.'
Posted by Richard T Kelly at 16:58:00 No comments: Links to this post

My brother bought me an iPod for my last birthday, an amazingly great gift, and this after a few years of my doggedly saying I didn't fancy one (whenever asked by nearest and dearest.) Well, so much for all that Luddite nonsense, because iPods are, as it turns out, magic. (Did you know that? Why didn't you say?) Of course I am merely and belatedly joining the multitudes. I do remember that in the months after the iPod launch there was supposed to be a steep muggers' premium on those distinctive white ear-plugs and cord. Yesterday, waiting in a queue for a bus and plugged into the 'deluxe' edition of Blind Faith (specifically the bonus 'electric' version of 'Can't Find My Way Home', possibly my favourite song) I turned to see three people sat waiting beside me, all sporting the distinctive white ear-jacks and cord... Hey, we are the world. My only fear now is that I walk blithely in front of a bus while nodding keenly to Aerosmith playing 'Back in the Saddle' live...
Posted by Richard T Kelly at 16:43:00 No comments: Links to this post

Memo to RBS Board: Walk, if you so wish 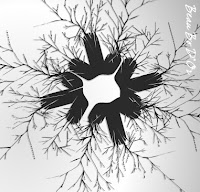 On the subject of the RBS board's alleged threat to resign should the traditional annual bonus pot be denied them by the Government (on behalf of we the people), the Times hedges its bets in a leader this morning, describing the course of denial as 'tempting' while repeating the oft-heard assertion that banks bleed talent when they can't pay these hard-driving geniuses millions in bonuses.

Thankfully, over on the Times' op-ed pages, Anatole Kaletsky doesn't mess about trying to graze his backside by sitting on the fence:


If these people threaten to resign, the Government should jump at the opportunity to clear them off the board, with no need for compensation payments of any kind... Who could run RBS if all these luminaries removed themselves? The answer is people with a sense of public service who have done well enough in other careers not to worry too much about the modest remuneration on offer — the sort of people who run public bodies such as the Royal Opera House or lead public inquiries into the reform of the health service...

The higher the salaries paid by RBS or any other bank, the more likely it is to fail, taking taxpayers’ money with it. The obvious and much discussed reason is that high salaries in finance generally reflect high-risk trading strategies… To maximise the chances of recouping its investment in RBS, therefore, the Government should ensure that the bank is run in the dullest, most risk-averse manner… the simplest banking operations should be quite profitable enough to recoup taxpayers’ money…

If limiting the size of the bonus pool encouraged the traders and investment bankers at RBS to move elsewhere, their departure should be a cause for celebration, not concern… What would then happen to the huge trading and investment banking businesses at RBS run by these highly paid and talented employees?... Now that global stock markets are on the road to recovery, selling off the higher-risk and more complex parts of RBS piecemeal would probably be more profitable than trying to keep the group together...

Which leads to the question of why bankers earn so much more than other similarly qualified workers. Is it really because they are so uniquely talented? Or is it because they have access to pools of capital, backed up by explicit or implied government guarantees? The answer is obvious… Rather than try to limit pay and bonuses directly, governments and regulators should simply insist that banks use all the revenues that they generate to increase their capital strength. In the case of RBS, a simple demand that the bank add a further £1.5 billion to its capital would drain the bonus pool and solve the problem.
Posted by Richard T Kelly at 00:05:00 No comments: Links to this post

Stately homes of England and me 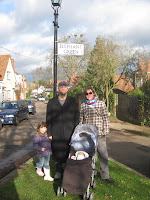 The family and I passed last weekend in the country, don't you know - Essex Country, mate, a very nice stretch near to Saffron Walden. Our host was my esteemed editor Lee Brackstone (pictured, with me and wor bairns.) When it came to the sightseeing dimension of the sojourn, Lee was fairly sure that I would be wanting to tramp around the very turf where Cromwell made camp with the Roundheads; and ordinarily, of course, I would - but that's not really going to provide the requisite diversion for bairns, is it? In any case, it was classic turn-of-winter weather, hardly ideal for tramping.
Instead we had a fine late afternoon wander round the gardens of Audley End House, the former Walden Abbey, gifted by Henry VIII to Sir Thomas Audley - and the sort of magisterial estate that makes you marvel at the very thought that somebody once called it 'Home'. Late though we came to the tourist-oriented on-site proceedings, we made it at least to the kitchen shop and were able to enjoy a delightful jam-tasting, which was, obviously, just what the bairns had been after.
Posted by Richard T Kelly at 16:47:00 2 comments: Links to this post

The invasion of Iraq, and the plain truth

Tony Blair's remark to CNN - concerning the current Chilcot inquiry and the rightness or wrongness of the Coalition invasion of Iraq - that he is 'happy to go through it all again', is likely to divide Blair's admirers and detractors as cleanly as a meat cleaver.
That division was never better exemplified in my eyes than by disparate columns last week from Sir Simon Jenkins in, I think, the Guardian, and John Rentoul in the Independent. Jenkins' sub-editor rather than Jenkins himself was presumably responsible for the headline 'We want Blair's head. But Chilcot won't give it to us.' (The Guardian is very good at speaking as 'We.') But Jenkins himself must be solely responsible for the following:
"We know the truth. The report can be written in a sentence. Tony Blair went to war in Iraq because he lacked the guts to stand up to George Bush, say the invasion was not justified by facts or law, and refuse to join him in Baghdad. Despite being told to his face by Hans Blix that there were no weapons of mass destruction in Iraq, he deceived the cabinet and parliament and took his nation to war."
Now, quickly, compare with Rentoul on the same day:
"Everything important is known, with the kind of disclosure of official documents in the Hutton inquiry that would normally have taken 30 years or longer... in 2001 the British Government concluded that regime change in Iraq lacked a legal basis... the British view was always that regime change was inadequate legal basis for military intervention; that was why the legal basis was Saddam Hussein's failure to comply with UN disarmament resolutions."
In the gulf between these positions you will never see a meeting, and so like many I don't see the point of the Chilcot inquiry, which looks indeed to be rehashing old ground that was long ago sown with dragon's teeth and harvested bitterly.
Posted by Richard T Kelly at 13:49:00 No comments: Links to this post