Tolstoy or Dostoyevsky? The Debate Continues.

Say what you like about Vanity Fair magazine - that, for instance, it's Hello for people with degrees, or that its left-leaning political coverage might pack more clout if it wasn't swaddled in dime-a-dozen glossy worship of the Rich & Famous - but I have to say that Jim Windolf's blogging piece on Tolstoy, Dostoyevsky, and translations of both plain can't be beat for covering all the key issues in a sharp and serious and amusing manner. Windolf seems to be as interested as I am in Nabokov's famously high-nosed dismissal of Dostoyevsky and all his works.
This was not just a matter of public pronouncement for Nabokov but a stubborn refusal to teach so much as a word of the author of The Brothers Karamazov to his Russian Literature undergraduate students at Cornell University back in the mid-1950s (i.e. when Nabokov was still teaching for his pennies, rather than reclining at ease on royalties from Lolita.) Hard to argue with Nabokov, of course - but, really, this was muleish of him.
The recurrent debate on whether having a favourite between the two Russian masters implies a personality type (or disorder...) feels like mere dinner-party sport to me - certainly not a serious question once one's undergraduate years are past. It seems to me the older you get the more you're bloody grateful to have the pair of them around, if only in spirit on the shelves...
Posted by Richard T Kelly at 05:53:00 No comments: Links to this post

Blogging Joseph and His Brothers by Thomas Mann 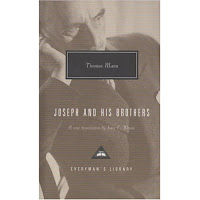 In my teens I enjoyed what was for me a very useful correspondence with the Scottish singer/songwriter Momus (Nicholas Currie), who responded very graciously to umpteen dogged queries I had about his delightful recordings, in particular some of their literary underpinnings. I remember my chasing him about Jean Genet and he saying essentially that one or two of the plays were fine and dandy but that the novels (Our Lady of the Flowers and so forth) he planned on 'saving for his old age', along with Kafka's America. I found this very impressive, and shortly thereafter affected a similar if less meaningful stance toward the later novels of Thomas Mann. Thankfully the pose didn't last and I gave in to Doctor Faustus, of which I can say there is scarcely a novel I like better. But I was daunted still by Mann's slightly earlier tetralogy Joseph and His Brothers, all 1400+ pages of it. 'Only the exhaustive is truly interesting', Mann is believed to have said. (But then he never had to get through Crusaders.) In any event a friend has just made me an excellent present of the recent translation of Joseph by John E. Woods, and some low-but-building thrill tells me this is the very moment to crack those forbidding pages. I'm probably old enough now. But how long will the whole take me, in this age of distraction? Hard to say, maybe all year, but as a project I will log my impressions of it occasionally as I go along. Next year, I don't doubt, all the readers' groups will be at it like rats up a drainpipe...
Posted by Richard T Kelly at 15:59:00 2 comments: Links to this post 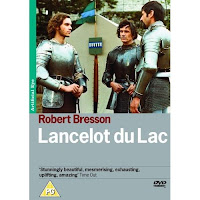 In the Ten Bad Dates contributors listing I cite this as my favourite movie, for whatever that's worth. I've put up with a dodgy second-hand VHS of it for ten years now, but last week I discovered it's new to DVD. So that's good. I wrote the following for a festival program in 1999:
'Among the elite group of acknowledged cinematic masters, Robert Bresson is the most mysterious, the most forbidding, the most intensely revered. On the strength of these slightly thankless distinctions, he was also reckoned to be box-office poison. But understand that Bresson was neither hostile to or aloof from the movie-going public. Au contraire: no director could have respected an audience more, been more desirous of their attention and appreciation. “You must leave the spectator free”, Bresson fretted during a Cahiers du Cinema symposium with Godard. “And at the same time you must make yourself loved by him. You must make him love the way in which you render things. That is to say: show him things in the order and in the way that you love to see them and to feel them…” From this you get a savour of the great man’s seriousness, and the depth of his passion. Of course, if each man’s love were the same as the next, we’d all get into a terrible punch-up. As it is, Bresson’s inimitable way of seeing can still divide a crowd. Five or so years ago, I took an American friend to the re-release of Bresson’s Lancelot du Lac at London’s Everyman. We were fellow film students, accustomed to casting a self-consciously cool eye over each other’s favourites. On my home turf, so to speak, I was a little anxious, not having looked at Lancelot in years. Yet within minutes of projection, I was bobbing happily on the edge of my seat. After all, who but Bresson had the nerve to make films like this? Towards the close, as Lancelot tersely rallied his comrades for their doomed last stand (“Pour Artus contre Mordred!”), I wondered why this moment couldn’t inspire the same misty cinephile reverence as Warren Oates’ analogous “Why not?” in The Wild Bunch. Nevertheless, en route to the pub, my buddy was wryly sceptical of what he’d just seen: ‘Man. All those shots of feet…’' 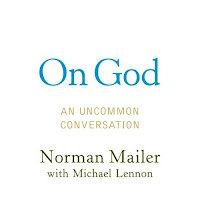 I'm reading this extraordinary book of dialogues between Mailer and his friend the scholar Michael Lennon, recorded in late 2006. They confirm and elaborate upon those spiritual convictions of Mailer's that have always erupted out of individual novels in the past, but which were abundantly present on every page of what turned out to be the last work, The Castle in the Forest. It's all quotable stuff, but this is a particular speculation that I was mentally underlining within moments of first meeting it:
"All right - we are going to be reincarnated. Whether we know what our reincarnation will be, I doubt. I expect it will be full of surprises, most unforeseen. Some, given our vanity, are likely to seem outrageously warped."
Posted by Richard T Kelly at 09:25:00 No comments: Links to this post

The Boss vs Lionel Bart... 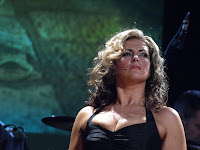 Last night, around 9pm, my mobile started ringing. I recognised the Caller ID and answered, only to hear dim ambient noise, the hubbub of a group of people, some distant music. I figured My Mate had triggered his Blackberry accidentally down the pub, and so ended the call. Moments later my phone rang again, and this time the music was louder and clearer, as were the lyrics, and people were singing along: 'Because the night/belongs to lovers...' Finally my brain started working, this after a long torpid day. My Mate was at the Springsteen show at the Arsenal Emirates, and the E Street Band had just lit into the tune Bruce gave to Patti Smith. And My Mate just wanted to share a little of that magic with me. It sounded fantastic, though not as glorious as 'She's The One' when My Mate duly called me back 3 minutes later...
Would I had been there. It would have much amazed me. Very like... But the asking price was £125 face-value for a ticket, and I can't live with that. In any case my missus was watching the Andrew Lloyd Webber music show I'd Do Anything on BBC1 and I was getting more and more interested as it came down to a public vote between two girls vying to be cast as Nancy in a new Cameron MacIntosh West End production of Oliver!
Then came an unexpectedly great moment of television - or as good as these extended-advert talent-contests can manage: both Lloyd-Webber and Macintosh showed their hand in advance of the public vote, and said they favoured 18-year-old Jessie (Irish, flame-haired, clearly highly gifted, understandably a tad vulnerable) over the mid-20s Jodie (from Blackpool, with a good big voice, and a heroic weight-loss behind her, in all a typical model of what you'd want for Nancy if you intended the show to be much like the film etc.)
But I certainly respected their preference: god knows who'll play Bill Sykes this time out, but the idea of young Jessie as his deluded and masochistic female doorstep suddenly proposed an unusually strong, interesting - even disturbing - Oliver! Alas, the British public know what they like, and clearly wanted this Oliver! to have all the heft and originality of an episode of Eastenders, and so plumped for Jodie. Jessie couldn't hide her tears, but the camera kept a fairly dignified distance from these. Anyhow I hope she'll do very well in something else in due course. But as for Lord Lloyd-Webber and Sir MacIntosh, well, they just had to stand there and applaud their second preference, something that two men of their wealth and standing must find a bit galling. Still, in these dog days for the West End, they have enjoyed another extraordinary PR boon for their project on BBC primetime (a state of affairs that Kevin Spacey was sounding very annoyed about on behalf of Dame Theatre a while back.)
Meanwhile over at the Emirates I assume the Boss had moved onto The Rising or Born To Run or however it is he closes his shows these days. Yes, I should have been there. I don't believe in being puritanical about musical taste, but it's better for the soul to stay attuned to the Good Stuff, and listening to Jodie earlier giving it karaoke-style welly to a version of Whitney Houston's appalling I Have Nothing was a grim reminder of the stuff that will otherwise creep into the void between one's ears.
Posted by Richard T Kelly at 07:37:00 No comments: Links to this post