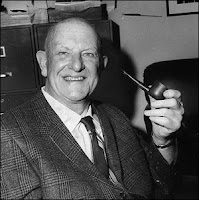 My Bookhugger column last month (last week, frankly) was inspired by the wonderful BBC4 archive series In Their Own Words, culled from the Corporation's back-catalogue of interviews with major British 20th-century novelists. Television does indeed compel us to look at books, so long as the programme-making and writing in question have sufficient spark. It took a while for TV to 'do' book-chat without too many excruciating pauses, but P.G.Wodehouse, here c. mid-1950s, biting amiably but hard on the end of every query, shows himself to be ahead of his time, whatever the culture once thought.
Posted by Richard T Kelly at 16:06:00 No comments: Links to this post

What We Did on Our (Bank) Holiday

This picture just in courtesy of my brother, who was one of our party of nine (inc. 4 kiddies) sharing a big old family-cottage-rental up in Suffolk last weekend. Behind us here is the 16th-century Melford Hall, as impressive up close as it likely seems even in miniature, the lawns of which were as lush and springy as any I've ever laid foot on.
Posted by Richard T Kelly at 15:52:00 No comments: Links to this post 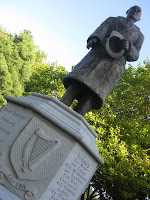 Tony Blair and I both were in Dublin on business at the tail of last week, but I should say that our paths never crossed; nor did I have to face eggs and shoes thrown at me in public, unlike the ex-PM and memoirist. While over there I did overhear some Irish Robespierre-type interviewed on the radio news, bullishly making known his intention to protest Blair's presence on local soil, based on this pilgrim's own belief that war criminals, liars and scoundrels have no place, no prayer and no mission in Ireland.
With all due respect to (and personal fond regard for) Eire, the Irish, and the proper instinct to fight against evil, I’m not sure I’d have wanted to make so rash a claim as this chap, not in the full and harsh light of Irish history. To take only one instance: in Dublin’s Fairview Park, close to where I was lodging, I happened to pass this civic statue (pictured) of Sean Russell, the former IRA quartermaster who opened up the organisation’s contacts with Nazi Germany in the late 1930s, out of what looks to be ‘physical force’ ideological idiocy (exploiting ‘England’s difficulty’ and all that) rather than any active enthusiasm for the jackboot. Still, the fight against imperialism seems often to entail that one must make a lesser-evil choice between empires. I know that self-styled Trots plus some of the broader church of Not-in-my-Namers think themselves the true-blood scourges of all known and existing nastiness, i.e. for all the Good against all the Bad, be it Right or be it Left – but it’s only their fundamental estrangement from reality and its pains that enables the taking of such high/mighty positions.
My actual business in Dublin concerned current plans for a second and revised edition of my Sean Penn: His Life and Times, first/last published in 2004-05. Since Mr Penn has been around the Liffey shooting a section of his work on Paolo Sorrentino’s new film This Must Be The Place, I was very fortunately able to grab a little time with him on- and off-set to talk over his recent endeavours and roll some tape toward the updating of the book. As for This Must Be The Place, it’s a very exciting prospect – would have been so just on paper for the teaming of Penn with the maestro writer-director of Il Divo. But the bits and pieces of filming I witnessed encouraged me to believe this will be cinema that is highly original, unclassifiable and very, very special.
Posted by Richard T Kelly at 04:19:00 No comments: Links to this post