Robert Harris on The Political Novel @ the LSE 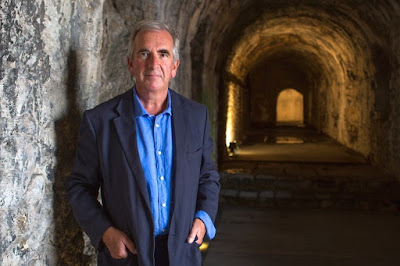 In 2009 I reviewed Lustrum, the second of Robert Harris’s 'Cicero Trilogy', for the Financial Times. Praising Harris’s ‘distinctive excellence’, I wrote that he ‘understands politics and how to dramatise them: their necessary imperfection, their dependence on the embrace of lesser evils and shabby means that serve higher ends.’

Last night I went along to the LSE Literary Festival to hear Harris talk with Peter Kemp of the Sunday Times on the theme of 'The Political Novel' – an event organised in association with the Royal Society of Literature. Harris’s ability to discuss his working process, his view of the world and how he conceives his fiction is matchless in its assurance. As a huge Harris fan, and having spent the last few years writing and researching my own novel of politics The Knives (forthcoming from Faber this August) I could hardly have passed a more thoroughly engrossing ninety minutes. My notes from the evening are as follows:

1. In his early twenties, having been president of both the Cambridge Fabian Society and the Union, Harris contemplated seeking selection as a Labour MP. But he came to the view that the ‘modes of thinking’ for a politician and for a writer were too far apart, and that he preferred the latter. Having done that much hard thinking, though, he readily admits still to a ‘sneaking sympathy’, an ‘instinctive empathy’, for working politicians. He told the audience in tones of relief that it was some peoples’ jobs to get up in the morning and think about Brexit or the junior doctors, but not his.

2. He was shrewd and amusing about his early career path: how, post-Cambridge, having set himself on journalism, but having come from ‘the provinces’, he had no intention of going back there to serve a necessary Fleet Street apprenticeship; and so went for and secured a BBC traineeship. Later he was again acerbically funny in pointing out that, while his path through university and media would have made easy enough material for the sorts of English novels “that have been written by others” he felt this was inadequate material for good fiction.

3. In digression, some of his liveliest tales concerned his association, beginning at Cambridge, with the ‘controversial’ historian David Irving, who certainly knew that the so-called ‘Hitler Diaries’ were a forgery. I was reminded of Christopher Hitchens’ account of the kind of hair-raising ‘wit’ a writer will expose himself to if keeping Irving’s company. 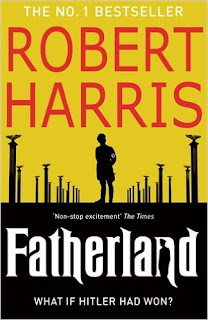 4. Harris was fascinating on how his bestselling fictional debut Fatherland began as a non-fiction project, ‘a Baedeker guide to a world that never existed’, until he realised the freedom he needed to start making things and characters up.

5. Also v intriguing: his description of how, instead of Pompeii (2003), he nearly published – spent quite some considerable time on – a dystopian novel about an America whose politics fall under the sway of a Disney-like corporation. Clearly he chose well to jack that US-set book in and find another imaginative way to write about an empire under threat.

6. His two big tips for an aspiring novelist? 1) Have some sense of what your ending will be, where you are heading, even if you detour along the way. 2) The point-of-view of the narration determines everything.

7. An additional tip for the thriller writer: have a tight time-frame. Then shorten it.

8. Really fascinating for anyone who knows cinema (i): Harris talked about admiring and wanting as a novelist to emulate the film directing career of Stanley Kubrick, who, he felt, ‘could do any place.’ I suspect this wish is rather a common one.

9. Really fascinating for anyone who knows cinema (ii): Harris was very funny about his collaborations with Roman Polanski – to wit, how he sent Polanski the manuscript of An Officer and a Spy (the idea of a Dreyfus project Polanski had, after all, initiated), and then received copious notes on his prose from the maestro down the telephone.

10. Asked if he would contemplate a contemporary Westminster-set novel, comparable perhaps to the works of Trollope (which Harris ‘loves’), he admitted to some reluctance – that the Commons is no longer the most powerful legislator in the world as in Victorian times, that the drama and the stakes are just not the same. That said, he was surprisingly passionate – surprising even himself perhaps – when he talked of the drama he discerned in the ‘coded battle’ that had taken place in the House just the other day between David Cameron and Boris Johnson; and he evoked the ‘Shakespearean’ falling-out of the Miliband brothers and ‘what had happened to the Labour Party’ because of it.

11. Asked for his thoughts on political fiction that emphatically set itself on one ‘wing’ of a political argument, Harris was emphatic, saying that he felt for a novelist to try to ‘animate an ideology’ was a ‘fatal move.’ Though a Labour supporter still, he made clear: ‘I can’t believe that virtue is all on this side.’ This is as near as dammit a quotation from Trollope, and an eloquent gesture from one master of the form to another.

12. In my view Harris's early non-fiction works should be read just as keenly as his novels, for all that he has firmly chosen the latter camp now for his output. But at one point last night he looked a little wistful in remarking that his The Making of Neil Kinnock (Faber, 1984) is probably 'not much read these days.' It should be read by anyone interested in British politics - "now more than ever", perhaps.
Posted by Richard T Kelly at 06:38:00 No comments: Links to this post