Financial Crisis Redux: We are all Japanese now 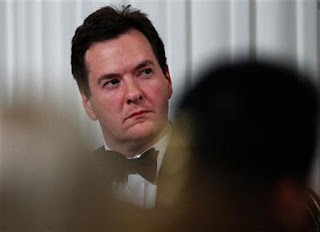 Very interesting this week to see the sudden, riled, edgy urging of a Plan B For Growth/Contra Recession by a good many financial journalists – this urging upon a Chancellor who clearly has wished to be seen as a Man of Iron, and whose confidence is probably rice-paper-thin right now, as the economic forecasts start to turn over the ballast in everybody’s guts. In these circumstances it’s no wonder that Ed Balls, with his mildly psychotic and probably permanent air of assurance, is unusually happy to be asked to give a lot of sound-bites on the general theme that, since everyone in the world has now stopped spending money, then it’s time for the UK to resume the practice.
I can see that George Osborne hates the thought of humiliation, maybe even more than the rest of us. I hadn’t thought he could bear the idea of calling a slippage on his deficit-reduction programme. But I’m truly curious to see what else he can do now. No amount of small-beer red-tape-cutting or enforced ‘flexibility’ upon the labour market, no greenbelt home-building or income tax tinkering can turn around the grim figures. Some big infrastructure projects – ‘public works!’ – would be the smallest start, and very welcome to my mind – but themselves inconceivable as of a few months ago, and thus a lot for Osborne to swallow. Let’s see if he can face the idea of ‘finding’ money to stuff into the public maw.
My problem with Ed Balls – sorry, one of my problems – is that I don’t believe he’s bothered by the notion of rebalancing the economy, only with slackening the pace of deficit reduction, and what that could mean for him in the eyes of Labour’s usual voters. And I don’t think that’s an adequate showing from an Opposition in these circumstances. Obviously no Opposition would put up costed plans this early in a parliament but, given the State of the Nation and the slough of public disregard that Labour's fallen into, I think they could do themselves a favour by seeming to be chomping at the bit with smart cost-efficient fiscal ideas.
I’ve been intrigued to see the amount of press play given (as here in the New York Times) to Adam S. Posen, the American economist on the Bank of England’s monetary policy committee, ‘a leading expert on what is often called Japan’s lost decade’ who sees the US and Europe as repeating ‘the same monetary policy mistakes that left Japan’s once-robust economy stagnant...’ Posen is nakedly advocating ‘more monetary stimulus’, and I admit I don’t see why that’s going to work now rather than before. But I’m more interested in his conviction that ‘the Bank of England and the British Treasury form a government-backed bank to make small-business loans.’
I've just written a long paper about the prospects for the North East England economy, to be discussed at the Durham Book Festival next month. It was largely concerned with urging entrepreneurialism and growth in SMEs. However I fought shy of too many policy prescriptions, just because the paper assumes tight-fisted Tories in power until 2015 at the very least. But then maybe Osborne really is about to un-constrict the spending sphincter, in which case all bets are off. If I were urging positions upon Labour now... well, business-targeted job-creating infrastructure projects, the full gamut of tax breaks for start-up businesses (research, employees, profits), establishment of sector-specific state investment banks, vocational training (also adult re-training) in hi-tech, digital and green energy skilling... yeah, I'd probably be focusing on things like that, in respect of what the state can do as an engine for growth, and not just a dispenser of hardship funds.
Posted by Richard T Kelly at 16:16:00 No comments: Links to this post