Politics as Fiction: Making the Best of a Bad Thing 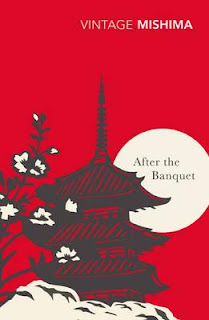 Since I have a bit of previous when it comes to ‘top tens’ I was happy to answer a request from the Nudge book-lovers website for a list of my ten favourite fictional politicians in literature: that rundown is online here, and I daresay it jams in most of what are considered the classics in this field, alongside one or two curios and/or amusements.

I must admit I don’t think I could have made it up to a top fifteen – there’s not an embarrassment of riches in the literary rendering of politics and politicians, unless you’re really keen on varieties of stage villainy writ large across a page. The challenge, as I see it, is how to render accurately both the politician’s trade in all its impossible complexity, and the politician as a realistic human being rather than a straw man ‘leaking sawdust at every pore.’

I don’t believe Penn Warren’s All The King’s Men can be bettered as a poetic vision of politics, how it works, and what it does to us – but I do really love Mishima’s After the Banquet, inter alia for a special insight it shares with Tolstoy’s great novella The False Note, in which the Tsar, wrestling alone with an ethical problem, is shown to realise that:

This, I think, is one of the great dilemmas facing the senior politician, whatever his/her ideological stripe.

My interest in this topic has been sharpened of late since, as mentioned at the head of the top ten, the novel I’m now working is about a senior politician of my invention. As is my wont I’ve been researching the world of the novel as actively as if it were to be a piece of non-fiction, and all of that legwork has been fascinating. Where I am not bound by the Chatham House Rule I hope to share a few odds and sods of that research here as I go along.
Posted by Richard T Kelly at 11:06:00 No comments: Links to this post

I realise belatedly this clip has been knocking around online without my noticing: some bits from a discussion I had with George Miller of the Podularity site about The Possessions of Doctor Forrest, recorded at some point in the late spring of 2011, and quite possibly on the morning after a Night Before...

Richard T. Kelly on The Possessions of Doctor Forrest from George Miller on Vimeo.

Faber now makes a habit of asking its author to select some end-of-year cultural highlights for posting at the Thought Fox blog, and mine were included in this tranche a week before Christmas. I think I said all that needed saying: to be honest, my list includes just about everything that I found time to take in over the last twelve months - certainly the one exhibition I got to, which was Lucian Freud, need you ask. But if I had spread my categories a little to mention memoirs read then I would have wanted to extol Pete Townshend's Who I Am and Jack Straw's Last Man Standing, each of which seems to me exceptionally insightful of its author and in its field. And then if I hadn't been making such a fuss of Bob Dylan and Mozart I would have saluted the wondrous Catherine A.D. and her album of cover versions, Reprise, which followed 2011's superb mini-album Communion, and includes the Crystals cover below. I was stunned to learn that back in July of last year Ms AD also managed to publish this.

A couple of years back I mentioned the MFA thesis I submitted to the BFI in 1995, an interview-based study of the life and work of the late production designer Ferdinando Scarfiotti. It was, I hoped then and think now, a decent and useful piece of work, and I was especially grateful to Paul Schrader and Bernardo Bertolucci for their contributions, very evidently made out of the deepest regard for their friend and collaborator.

Anyhow, a few chunks from the thesis have ended up online, here and here, accompanied by some attractive frame-stills. Fine by me, as I'm correctly cited, and otherwise the thesis would have no meaningful afterlife other than for visitors to the BFI Library. Please do look for yourself, and remember one of the most quietly influential figures in twentieth century film style.
Posted by Richard T Kelly at 13:27:00 No comments: Links to this post