Hard to argue with Charles Clarke in the Indie yesterday: "Blair's Presidency of the EU... would encourage the rerunning of past battles rather than enabling a new approach to be fashioned." Quite. No-one even knows what the job is really about, and Blair is not even a professed candidate, but still all we're hearing about at the top of the news hour is Iraq, Bush, WMD, 'war crimes' et cetera.
Moreover, as Clarke wisely added: "Whatever the merits or otherwise of this assessment, it remains very doubtful that Tony Blair will command the support he needs to secure this appointment and the UK should certainly not be putting all its eggs in the basket of winning the Presidency." Indeed, tonight it looks like Blair has nowhere near the votes he'd need. On sober reflection he ought to be glad of this outcome.
Posted by Richard T Kelly at 17:54:00 No comments: Links to this post

Elvis Costello & The Brodsky Quartet: Use Your Disillusion 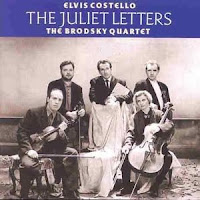 I totally missed the news that Costello was touring this year in the company of the string quartet with whom he wrote and recorded 1992's Juliet Letters. I loved that record, and still think that some of its songs are among Costello's very finest, though his fanbase and the classical connoisseurs seemed generally less enamoured.
On first hearing the track 'Jacksons, Monk and Rowe' seemed like one of the more obvious and immediately Costello-esque lyrics, and in a rather bittersweetly poppy Elvis-like arrangement to boot. Yet apparently it was written by the Quartet's first violinist Michael Thomas, about his sister Jacqueline (the cellist), and inspired by a nickname their father gave Jacqueline, derived from a firm of Middlesbrough solicitors. (That does ring true if you think about the funny things you call your kids.) Collaboration makes for a kind of fusion: as Costello once advised listeners to the fruits of his occasional joint songwriting with Paul McCartney, "The ironic part is, if [a certain bit] sounds like he wrote it, I probably did, and vice versa."
But Costello was right to say that the chorus-like recitation of 'Jacksons, Monk and Rowe' in the song is "a motif among images of both childhood and adult disillusionment" - culminating in the 'sad divorce' of the final verse (Costello, of course, is thrice-married, twice-divorced.) As a child the very last thing you imagine you'll ever keep in the room where you sleep is dusty box-files of correspondence with firms of accountants and lawyers. But so it comes to us all, sure as the final curtain... 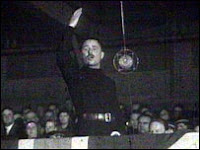 Aryan fascism? My take on the subject is clear to me as the nose on my face, and I've held said view for years, even though it probably only took me about five seconds to form it - as quickly, in other words, as it takes a racist to figure out his measure of a man based on the colour of the epidermis. Still - and yes, call me shallow - but doesn't it strike you too that those in our society who decide to speak up loudly and proudly about a 'master race' (presuming all the while to count themselves as staunch members of said societal backbone) always look to be made out of the most paltry genetic material? You never get the sense that such evolution-resistant specimens could ever have succeeded in getting our great big budding human race out of the trees.
The estimable James MacIntyre of the New Statesman - who has himself done time as a BBC politics producer, putting wise words into the earpieces of adept-if-overpaid anchormen - says all that needs saying here about the risible performance of our state broadcaster last week. Meanwhile, in the absence of a Wodehouse to nail up the latest "perfect perisher" swanking about as spokesman for our Aryan inheritance, we at least have the splicing brilliance of Cassetteboy, below.