You can follow this link to hear me reading a selection of shortish bits from Crusaders at RADA this Monday night past. The MP3 starts with an explanatory preamble, but you can skip that if I hereby explain that what I read was 4 chunks from the 'back-story' of Stevie Coulson, concerning his bitter childhood and bullying stepfather, his discovery of 'the iron' that will make a behemoth of him, and the forging of his mettle on his first night as a professional doorman at a Gateshead disco-pub. There are 4 main characters in Crusaders but on the face of it if you had to say one was the protagonist, based upon word-count alone, it would likely be the Rev. John Gore. However an early review in the Tatler alerted me to a viewpoint held by a good few other readers subsequent, namely that in terms of the level of drama and the gravity of actions and consequences then Crusaders is really The Steve Coulson Story. So there you go. You write something and then a year later, if you're lucky, somebody tells you what you actually wrote.
Posted by Richard T Kelly at 14:28:00 No comments: Links to this post

Yes, that's James Corden on the cover of the new Esquire. Much other fine stuff within, de rigueur. My contribution is a review of You Don't Mess With The Zohan, in cinemas across the UK as of this Friday. Decide for yourself if that constitutes a correct use of available media space in which to comment on the state of the Seventh Art. But I am unashamedly a fan of Adam Sandler's, if not of all The Work in equal measure. Still, friends and acquaintances give me a lot of stick nonetheless. I don't think I can make the Case For Sandler any more extensively or straight-facedly than I have in this month's Esquire - my wife, in any event, has heard and watched enough, and that includes Mr Deeds and Reign Over Me. So this be my final word on the subject. For this year.
Posted by Richard T Kelly at 14:12:00 No comments: Links to this post 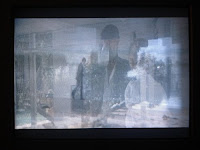 This is a lovely US review of 10 Bad Dates With De Niro by Rodger Jacobs for PopMatters.com. The book is described as one "to obtain and keep on one’s nightstand or easy-to-reach shelves for years to come." Naturally I am also flattered to hear I've done anything 'masterfully', knowing all too well where my limitations lie. And I'm extra pleased that so many of the book's top-ranking contributors have had their work singled out, including Matt Thorne for his list of movie drunks, and in particular the selection of Sterling Hayden (shown here, through a glass darkly) as Roger Wade in Altman's The Long Goodbye - still the very model of a cult movie, one that rightly got several citations in the book, and a picture I could sit and watch straight through anytime.
Posted by Richard T Kelly at 16:17:00 2 comments: Links to this post 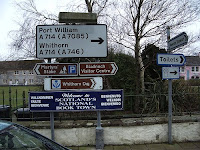 I'm in Edinburgh this weekend and looking forward to it greatly, but it's now online that come Sunday 5 October I will be back in Scotland, this time for the Wigtown Festival: an event set for 15:00 pm at County Buildings and costing£6.00. Programme details are here. I've heard fine things about Wigtown and look forward to the craic.
The Times extols Wigtown as "a small, friendly festival in Scotland’s official Book Town – which has about 20 bookshops... in rolling countryside by the sea, near salt marshes and Britain’s largest local RSPB bird reserve. It is also the only book festival with a local whisky distillery, Bladnoch." Trebles all round then.
Posted by Richard T Kelly at 16:18:00 1 comment: Links to this post

My publisher thoughtfully sent along the quotable bit from the Sunday Times, so I will make do with that, and leave the rest to fond imagination:
"Kelly succeeds in making the story of a troubled Anglican priest struggling with the problems of a sink estate the unlikely focus for an ambitious and absorbing state-of-the-nation novel."
That said, I do rather wonder who was the author of this short review... Perhaps a trip to the library after all, then.
Posted by Richard T Kelly at 15:25:00 No comments: Links to this post

My Breton Holiday, As Foreseen By Somebody Else

This lovely still of the beach at Val Andre taken from Flickr represents the composite dream/reverie version of how me and my family spent the last week... My Cybershot camera is broken at the moment, so how nice that the web allows one to whistle up instant holiday snaps, however unpeopled! But in fairness ours did involve a good deal of sand-castles and ice-creams, so the spirit is there.
Meanwhile, back in the real world, little did I know how bloody awful things were getting while I was filling those buckets with sand...
Posted by Richard T Kelly at 14:58:00 No comments: Links to this post

Crusaders paperback reviews in the Guardian, Telegraph... and Sunday Times?

I was on holiday in France all of last week but heard from one or two kind friends that the Sunday Times of August 3 wrote kindly of Crusaders in their paperback round-ups. It's not online so I'll have to go a-hunting in the library, most like... Today, though, I'm very pleased to see that the Guardian and the Sunday Telegraph (scroll down) have also printed positive Crusaders reviews. In one of those funny-peculiar bits of timing, the Saturday Telegraph ran a negative write-up yesterday, one that slightly suspiciously echoed one or two others from the past by complaining of one noun in particular, i.e. my attributing to Steve Coulson a feeling of 'tristesse'. But then you will see this sort of thing from a certain caste of English book reviewer: the certainty that proletarian characters in books (and life?) can't possibly have complex or profound emotions. Which is interesting stuff, in its own way...
Posted by Richard T Kelly at 07:26:00 No comments: Links to this post

This Is My Brain. But Which Is My Good Side? 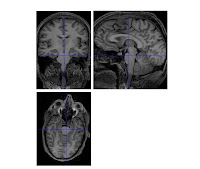 The week before last I had the intriguing experience of calling on a neuroscientist at her Bloomsbury laboratory, and having my brain scanned by an fMRI machine, the results of which you may see herewith.
Yes, just like in the movies, I removed all metal about my person, including my wedding ring, lay on a gurney to which I was then strapped, and was then rolled slowly by remote control into a dark and confined tubular space that consumed me as far as my chest. Then, to muted sounds rather like the pulse of monotonous machine-made 'dance' music, my brain was laboriously imaged by magnetic resonance. It was a fairly peaceful 12-minute experience, as pensive a time as I've been allowed in recent months... Admittedly my thoughts turned once or twice to William Hurt as Eddie Jessup in the movie Altered States but it was all over much quicker, and I didn't regress to a primordial state.
So what is there to be said of my brain, relatively speaking? Hardly anything. I'm told it's a fairly normal boring brain, albeit with less space in the skull cavity than a man younger than I would have - apparently that's another aspect of ageing that can't be avoided, but can also prove useful in the event of serious head injury...
Still, all in all an interesting evening's pastime, free of charge.
Posted by Richard T Kelly at 07:10:00 No comments: Links to this post