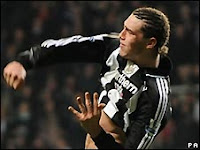 Cornrow hair-dos on rock stars, I can just about allow to pass. (Basically I can't think of any to mention, beyond the one sported by Axl W. Rose, and this blog uses and keenly endorses Chinese Democracy, also being of the view that Axl's long locks back in his G'n'R heyday were basically those of a big girl.)
But in general I would be on the side of those who think that cornrows look fairly peculiar on white males. On black guys - I rather think they're best carried off if you happen to be a hip-hop MC or R&B vocalist. On black footballers, well... Rio Ferdinand's used to crack me up, and I guess it must have cracked up his teammates and eventually old Rio too. (David James's imitation-Rio was just James doing what he does best, i.e. worst.)
And Newcastle United's contribution to this key masculine grooming issue? I'm thinking back, and until today only Carl Cort, the makeshift 'striker' bought from Wimbledon by Bobby Robson for £7 million, sprung to mind. That was before Andrew Carroll of Bensham took to the field for today's home game against the Irons...
I am unreservedly delighted that the lad who's been banging them in for the stiffs all season has now notched his first top-flight goal, and by all accounts he put himself about for 90 minutes and proved a proper handful and salvaged a valuable point - for all that the result feels like a slight stumble back into the relegation mire, exacerbated by Stoke's point against the same Liverpool side who stuffed us over Christmas. I would love it, love it if Andy Carroll led the line with honours for Newcastle United in seasons to come.
Still, but. Sort your hair out, bonny lad. I know you think you've just sorted it but you've not. Never mind 'the stick' you'll have had off the teammates already. Listen to Alan Shearer on MOTD, who liked the barnet about as much as the direction on that header that found the side-netting when we were 1-0 in the first half...
Posted by Richard T Kelly at 12:22:00 No comments: Links to this post

This would be Esquire's inauguration issue then. The inimitable Andrew O'Hagan writes about Obama therein. Elsewhere, the excellent Miranda Collinge interviews Michael Sheen. My contribution is a short consideration of The Wrestler, now in UK cinemas. The bits that are taken for pull-out quotes in these cases are usually a wager on what is the reader's likely interest. In this particular case:
"In The Wrestler’s first reel Aronofsky keeps his camera on The Ram’s shoulder, as if the film were hard-edged docu-drama. But in fact he’s just shooting his star, teasing us before revealing Rourke’s face – the complexion tandooried and tenderised, the lips like waxen fruit."
Call me hypocrite, lecteur, but I go on to say that I do wish people could stop writing about the tragic case of this actor's former handsomeness - it's a little bit unseemly - but then The Wrestler makes this impossible: the movie is just such a big untrammelled load of Rourke.
For the sake of full disclosure I should admit that back in late 1986, while Rourke was rumoured to be in Belfast researching an accent for a movie role with the help of the playwright Martin Lynch, I undertook a most unwise night of underage drinking in some unsuitable pubs he was (no doubt wrongly) rumoured to be frequenting. Why? Well, no doubt the touching hope of bumping into him and striking up an instant rapport. I lost it at the movies, indeed...
Currently one notes that Rourke is really putting himself out there for the awards season, and much is getting written about his Early Life and Later Lost Years, including an interview piece in the New York Times by Pat Jordan about which, one supposes, the subject may have mixed feelings.
Posted by Richard T Kelly at 10:16:00 No comments: Links to this post 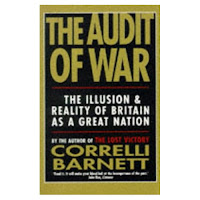 I haven't heard (or rather, paid much attention to) the name of Correlli Barnett since I was a sixth-former, which was back in the 1980s, at which time a high proportion of the Thatcher Cabinet appeared keen to summon Barnett as ballast for their argument that Labour's policy backwardness was entirely responsible for Britain's post-war decline, and that the Tories would not sit back and be mere managers of same.
Naturally this esteemed Fellow of Churchill, Cambridge and author of The Collapse of British Power has not been letting his sword rust in its scabbard while I was looking elsewhere. Yesterday in the Times he gave a timely and well-seasoned blast on the old horn about Israel's latest failure:
"The Israeli leadership (including Mr Barak, a soldier who ought to know better) have yet again been deluded by the seductive fallacy that air power (especially air power in today's hi-tech form) can win wars all on its own, and at no cost to those flying the bombers or directing the drones on TV from remote “PlayStations”... So the task of rescue falls to Israel's own ground troops - conducting a messy struggle with hate-fuelled guerrillas amid close-packed slums."
Posted by Richard T Kelly at 01:26:00 No comments: Links to this post

This Christmas my younger sister-in-law made me a rather inspired present of the 'Hillary Nutcracker' (pictured), which offers a decent likeness of La Clinton as well as some funny copy on the box ('What'd You Expect -- A Teddy Bear?').
So far, so amusing. Here's the problem: my daughter has now started playing with the toy Hillary, talking to it ('I like your necklace') and - horrors! - kissing it!
I am starting to consider making a necklace of my own, out of garlic, as protection against this clearly evil charm. A stake to the heart would be the next grave step. But I fear it will be to no avail...
Posted by Richard T Kelly at 06:49:00 No comments: Links to this post