Bookhugger column: "Is There Such a Thing as a Male Book?" 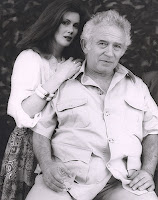 I'm glad to be back onstream in columnist capacity over at Bookhugger, and this month the chaps were kind enough to put in my lap a stimulating brief, namely a response to a fascinating piece on a useful topic written by Molly Flatt (pictured right) over at the affiliated Bookdiva. Said topic is the influence of one's gender upon one's writing and reading choices/preferences. And I daresay we all have a share in that subject. Pictured left, of course, is the late Norman Mailer and his late wife, the last of the six women he married, Norris Church Mailer. And you can imagine that I brought Norman into this discussion, without, I hope, doing anyone a disservice...
Posted by Richard T Kelly at 04:43:00 2 comments: Links to this post

NUFC: Limping to the line 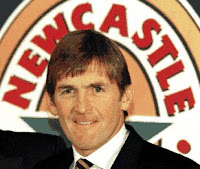 Gettin’ beat 3-0 off Liverpool is a wearyingly familiar experience, as indeed is getting beat 2-0 off Liverpool. Nine years ago one such 3-0 finally robbed the wheels off what had been our very real push to the top-division title under Bobby Robson - wistful to think back on it now, but in that season of 2001-02, with 11 games to play, the title was mathematically in our hands. Seems like dreamland tonight...
Today’s special discomforts: for one it was our owld manager King Kenny in the Liverpool dugout, looking like he’s really enjoying his football, as he never once appeared during his tenure at NUFC (at least not after the day of his coronation and mandatory mobbing by adoring Geordies.) And for two, owld King Kenny reckoned it would be canny just to bring on Andy Carroll for a 20-minute run-out even with the match won. You could have spared us that one, Ken, let it ride for another day... It’s only amazing that Carroll didn’t score, since NUFC alumni nearly always score crucial goals against us, as do the non-Toon-related glamour signings of other clubs, especially when they’ve otherwise been having a lean spell (so back Fernando Torres for a brace at least when we face Chelsea on May 15.)
The corollary to this gloom is that Newcastle rarely ever get to enjoy a reciprocal pleasure in ‘putting one over.’ I remember the hype and the chatter back in 2005 as Michael Owen prepared to face Liverpool for the first time in a black-and-white shirt. What happened that day? That’s right, we’s got beat 2-0, and Owen had the sort of disconsolate just-in-it-for-the-money-pal day that was his stock-in-trade at Newcastle.
The excellent True Faith seemed to me to get it right with this Carroll comment piece before the game. The sad - indeed pathetic - thing is that I dreamed I met Carroll last night – honest – in a crowd amid some kind of post-training canteen chat situation; and he seemed a very nice lad, and told me casually that he reckoned he’d probably be re-signing for Newcastle eventually, after the whole Liverpool thing had gone off the boil... So, alas, I clearly can’t say I’m over this thing yet. Worse, a Liverpool fan of my acquaintance, a good lad generally speaking, seems to have no conception of the pain he causes when he tells me cheerily how much he’s looking forward to having Jose Enrique on the left of defence next season.
In other Toon news the mighty nufc.com kindly transcribes some comments from Kevin Keegan uttered in his capacity as ESPN pundit – another warning that Carroll’s transfer fee will not be spent on new players, and this about our erstwhile #9:

"He (Carroll) was on the fringe when I was there. He was raw. This kid is the best header of the ball I’ve ever seen. That’s his biggest plus point for me... His minus points have always been there. Can he get his head down? Can someone make him realise that all he has to do is train hard, work hard and be a good pro for 10 years and he’ll be a very rich boy? He needs to get rid of the other stuff...”