This blog naturally takes an interest in the Government's new proposals aimed at increasing social mobility in the UK, and in Gordon Brown's assertion that the cause of improving people's life chances ought to be a "national crusade". Fair do's, but be careful you match your deed to your word, bold Crusader...
As we know, and the FT neatly summarises it, ‘The UK has particular issues with a lack of access to some of its elites, and it is poor at helping the poor to escape entrenched poverty.’ The Conservatives still like to see themselves as the Party of Opportunity, and Labour liked the sound of that title well enough to pinch it from them. So I trust there won’t be any political argument about the principle that people with talents and ambitions but impoverished means ought to be assisted by the state toward the achievements of which they are capable – achievements in fields where the better-off get a significant headstart. Since our particular estate in life was not ordained by God, there ought to be periodic and vigorous human adjustment of the apparent order of things. ‘Some people will always be dealt tough hands’ is how the FT puts it. ‘They must be helped to play their cards as well as possible.’
On the other hand, I firmly endorse Will Self’s sentiment that ‘in order that poorer but more able kids should be able to succeed it's important that richer and thicker ones should be encouraged to fail.’ I would modify that only to say that a goodly number of the Thick Rich will fail quite naturally, if permitted to, and they could then be usefully advised (as, periodically, are the less academically gifted children of the proletariat) on the worth and dignity of labour and apprenticeship, as opposed to the more frivolous career path upon which Marlborough and Oxford would have set them had they been more deserving of it.
So far, so worthy. I can see, though, that the Government’s plans to formally outlaw ‘class discrimination’ are a pointless gift to the Daily Mail (as is the sadly enduring career of the terrible Harriet Harman, a common-coin hypocrite and as big a walking joke as ever held high office in the Labour Party and Government.)
That said, Cameron’s Tories have been trying to take ownership of the issues of poverty alleviation and social mobility, despite the natural scepticism of their harder-headed supporters, such as the Mail. I have been impressed by the shadow Work and Pensions secretary Chris Grayling, a seemingly reasonable and thoughtful man who speaks well on the subject of ‘appalling worklessness’ and how we’ve allowed failed estates to become ‘separate worlds.’ I think he’s on the right track, but I’m less convinced when he starts pushing the party line about 'family breakdown' (appalling marriagelessness?) being such a vital factor in all this. And when he says ‘This is all about Gordon Brown fighting class wars and internal Labour political manoeuvring’, he’s merely being trivial. For better or worse, Brown and Labour are genuinely vexed by 'all this'.
A measure of Brown's intent? Well, Alan Milburn is back... As Brown’s 'social mobility czar', no less. To Milburn's credit he’s sounding serious, as he tends to, about the hidden barriers obstructing ambitious children from poorer backgrounds. As the council estate-raised son of a single mum from Tow Law (etc etc), this is a personal matter for Milburn, but he does the standard key-note speech on the issue pretty well.
Just the other day I was asked, not the first time – and on this occasion by a scholarly researcher from the North East, who’d read Crusaders very closely – whether the novel’s Dr Martin Pallister MP was ‘really meant to be’ Milburn? He isn’t, though the fictional Pallister has the typical mindset of the modernizing, northern ex-lefty-turned-Blairite Labour MP – a type of which Milburn is a glaring example.
Per the Crusaders affinities, though, I had to laugh in reading the self-proclaimed sand-dancer Kevin Maguire going after Milburn in the Mirror for what he gets paid in consultancies – ‘raking in the cash’, indeed, from Pepsi, Lloyds Pharmacy, ‘investors profiting from NHS privatisation’, and his own firm, the magnificently named AM Strategy. Late on in Crusaders Martin Pallister gets a similar roasting to his face from a local journalist in the course of a public debate in Newcastle:

‘I’ve a question for you, Martin, I’m wanting to know if there’s a price on every word comes out of your mouth. I’ve been looking into this man, see. Do you know even half what this honourable gentleman gets up to?’
Todd was brandishing a wad of paper, A4 pages in scarlet, waving them before him.
‘Take a sheet and pass it on there. Have a look. Some of it’s Register of Interests – not all, mind. No, he’s not doing badly for an opposition man. Consultant to TronTech Computer Systems. Where are they from, eh? Crooksville, Ohio, how about that? Twenty-five grand a year he gets for that… Now, what do you suppose TronTech get for their money? You think they won’t come knocking if
he’s ever in office? ‘Computer in every classroom’, indeed. I’ll bet they’ve a
fancy for a nice fat contract in Crooksville.’
‘Then you see he gets ten grand off Hart-McGrain oil, you know that Mr Salter, don’t you? Another ten off Hook Millard lobbyists in London. And – oh yeah – his researcher’s a lad on secondment from Hook Millard and all. How’s that work? Well, you might want to look at who he speaks up for, when he bothers to speak – all his early day motions, whose interests concern him... Aye, I tell you, they all want a piece of this man. They’re buying shares in him.’

I’ve tended to imagine myself tough on Milburn and the causes of Milburn, but I should confess that this Times article of his about Newcastle regeneration seemed to me an unusually articulate and felt contribution to the debate – from a politician, at any rate.
Posted by Richard T Kelly at 06:11:00 No comments: Links to this post 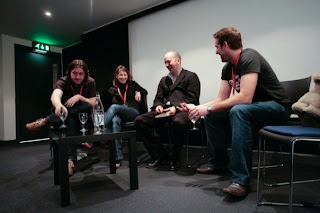 The Northern Lights Film Festival have posted some nice photos from this year's bash up onto a Facebook page, and already these bring back some funny memories - most particularly of the slightly surreal and riotous final night at the Baltic when the 'Big Pitch' talent competition was decided, and a substantive cash prize awarded to some suitably delirious young talent, followed by the compulsory elbow-raising beer 'n' wine frenzy at the bar next door.
Rewind about 4 or 5 hours and you get the tranquil scene here pictured: myself chairing a discussion on low-budget horror filmmaking in the Digital Lounge of the Tyneside Cinema; to the left of frame, the director Steven Sheil and his producer Lisa (they of the much-lauded Mum and Dad); to the right, the short filmmaker David Pope (and by that I mean a director of - very fine -short films, and not someone who's no taller than, say, Tom Cruise.)
Of course, the real horror of this scene was only to unfold a few minutes after I stepped off the platform and got on the phone, to learn that effing Stoke City had got their last-minute equaliser at Saint James's (see passim.) I won't bloody be forgetting that either...
Posted by Richard T Kelly at 08:10:00 2 comments: Links to this post 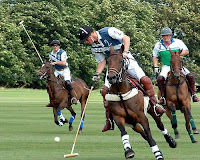 Can't really improve on the manner (above) in which Politicshome.com chose to bullet-point the comments of Keith Vaz, MP and Home Affairs Select Committee Chairman, on the topic of the Windsor lad and what he likes to call his duskier 'friends' (who are of course at liberty to tell the Prince to f*ck off - I mean, what could it possibly cost them...?)
This 'friend' is Cirencester Polo Club member and 'millionaire property developer' Kolin Dhillon. Apparently Sooty has been his 'affectionate nickname' for assorted royals and polo associates for 'at least 15 years'. I can't improve on the rest of what is online at the Evening Standard, so here are the gems:
- Mr Dillon 'is said to be close to other members of the royal family who also refer to him by the name.'
- "Neighbours near Mr Dhillon's home in Coates, near Cirencester, said no one outside the polo fraternity called him 'Sooty'..."
- "A member of the CPC, who asked not to be named, said the name Sooty had been introduced to put "two fingers up" to political correctness... [This source] said of the royal family: "They are no more racists than I am"...
Posted by Richard T Kelly at 14:07:00 2 comments: Links to this post