I haven’t been to the Cannes festival in a lot of years, probably not since 1999 (which was a pretty wonderful edition, what with the Dardennes' Rosetta and Bruno Dumont's Humanité.) I do rather wish I was there this week, if only to get an early look at Sean Penn’s new film The Last Face, which is premiering in competition and looks to me like a work of big promise, given its bold big-canvas subject matter (conflict in Liberia and Sierra Leone, international aid and the role of the UN) plus Penn’s considerable artistry as a picture maker. 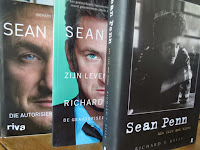 One of the most purely enjoyable bonuses of my having written a long study of Sean’s life and work with his participation is that I've had a fair few opportunities to watch him at close quarters while he works, both as actor and writer-director. I visited the location of The Last Face in late 2014 and, as usual, found it a hugely absorbing experience to observe the "big electric train-set" in motion; the new element was seeing Penn at the helm, right in the thick of that fast-flowing decision-making torrent that is directing a movie.

Penn’s attention to detail in creative matters is fairly well-documented (not least by me). But artists do define themselves by the things they pay attention to in life (cf. Bresson's injunction to 'show [the spectator] things in the order and the way that you love to see them and to feel them’); and Penn’s special investment in what he does is quite a powerful thing to be around. Here as elsewhere there's nothing 'armchair' about him.

Movies are made inch by inch, of course, so as a rubbernecker in those situations your sense of the whole is about as refined as what an insect perceives while crawling up a Byzantine mosaic. But while I was knocking around the location I was excited to see some rough assemblies of sequences that Penn’s long-time editor Jay Cassidy was putting together in the now-standard manner of movie production, and they struck me as highly powerful and affecting in their drama. So, here’s to the finished item, or Bonne Projection! as they say in the Palais de Festivals.

It's worth saying that Cannes, the best of festivals in this regard, has championed Sean as a director from the start, and the official brochures for the 2016 edition will note that his body of feature film work also includes The Indian Runner (1991), The Crossing Guard (1995), The Pledge (2000), and Into the Wild (2007).

These films are full of feeling, made with great verve and command of the tools of cinema (also very characteristic of their maker, who wrote the first two and has had a hand in the scripts of each subsequent project); and I think they repay a look from any discerning film fan.
Posted by Richard T Kelly at 05:43:00 No comments: Links to this post