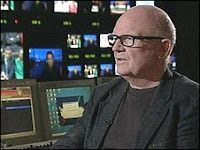 The other day I had occasion to revisit the original transcript of the long interview I did with Gordon Burn and David Peace back in April 2008, set up by and written up for Esquire. Gordon died 18 months ago, not long before my younger daughter was born, and he's still very much missed, but I believe there are plans in the works to make a considered tribute/memorial to him later this year. Meantime, reading again his fascinating reflections on his work, in particular those grimly essential studies of murderers, I was relieved to be reminded of some simpler musings he had to offer on the then-Prime Minister, which to me show once again his great adeptness at seeing the story behind 'The Story':

"[Brown's] ineptitude in terms of being naïve about how the real world works is amazing, really. I think his lack of adeptness with the media and 'spin' - all the stuff he was supposed to stand for, and which for three or four months looked like a good thing - has just become an embarrassment. It indicates his lack of connection with the world, with people. He’s been living in Westminster since 1983, even before then when he was living in the manse and into student politics, he just seems like a total f***-up as a person. When he says he likes the Arctic Monkeys or his favourite programme is Strictly Come Dancing... you know it’s utter crap."

... et les cons 'Gros Mike' Ashley et 'Degsy Llambias'... Eh bien, plus ca change... mais l'homme le plus sage est M. Keegan...
The 'disco' in the clip below, BTW, is at 02:15: 'Mike Ashley doesn't know anything about football... Derek Llambias knows even less.' But to be fair, Mike knows a lot about fizzy lager and can sell you a cheap pair of elasticated shorts, while Degsy is just the man for you if you happen to own a casino and are seeking some insufferable little big-mouth to run it.