On The Knives for the Guardian's Paperback Writer 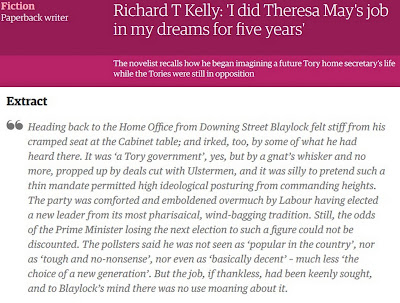 Pleased to see how this piece turned out, describing the genesis and gestation of The Knives from the back-of-an-envelope stage when I was calling it 'Homeland.' It's a terrific slot that the Guardian offers to authors to say a little of their process on the occasion of a book going into paperback. And it's a great song, too.

On the title of the piece: I wouldn't do Mrs May's job today for all the Jie in Changxing.

On the extract chosen: I suppose I could claim a little prescience on this one - '‘a Tory government’, yes, but by a gnat’s whisker and no more, propped up by deals cut with Ulstermen' - except that I had governments past fully in mind here. We're encouraged to think that what's happening today is unprecedented, unique, and how things are going to be from now on. But all our lives have been lived before us.
Posted by Richard T Kelly at 07:12:00 No comments: Links to this post

The Knives in the Guardian's Best of Westminster 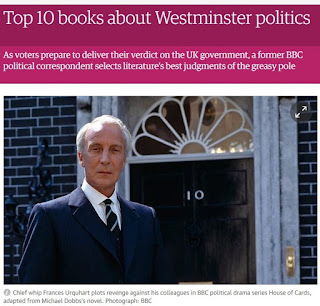 I’m honoured to have made the cut for this Guardian Books list of the Top 10 books about Westminster politics, as selected by the novelist and ex-BBC reporter Terri Stiatsny.

Having had a go at a similar list in the past I know it would be a hard thing to get to a Top 20 without resorting to filler material, i.e. the great many books that depict democratically elected politicians as venal, craven, thieving scum, which is to speak of books that don’t have much to do with life itself – since, as Senator Silas Radcliffe, anti-hero of Henry Adams’ Democracy, puts it, ‘No representative government can long be much better or much worse than the society it represents.’

So, a thoroughly agreeable thing for me to rubbing shoulders with Hilary Mantel, House of Cards, James Graham’s This House, and the Alans Clark and Hollinghurst...
Posted by Richard T Kelly at 04:29:00 No comments: Links to this post

Extract from The Knives on the Faber site 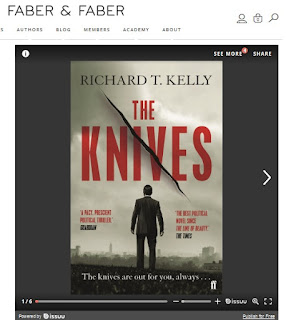 Over on Faber's website you can read this extract taken from the prologue of The Knives. It finds the protagonist David Blaylock circa 1993 as a young platoon commander in the British Army's share of support for the UN peacekeeping effort - or 'Protection Force'/UNPROFOR - during the Bosnian War.

If your subject is moral quagmires in politics, and mine surely was, then this was an obvious place in our recent European history at which to begin. How was anyone meant to keep peace in Bosnia in 1993 while the territory was being assailed under a preconceived agreement between the assailants (and supposed rivals), Tudjman's Croatia and Milosevic's Serbia, against whom UNPROFOR were not permitted to raise a hand in reproach?

It was hardly surprising that the Muslim population of Bosnia felt a dire need for military assistance in the shape of 'irregulars' - though the shape these volunteer fighters took, as dramatised in the extract, had a grim aspect all of its own.
Posted by Richard T Kelly at 04:04:00 No comments: Links to this post

'Spokesperson for the Doomed': a Backlisted podcast on the oral history of Warren Zevon

A few notes as background to my contribution to this podcast about Crystal Zevon's 'oral history' biography of her ex-husband the songwriter Warren Zevon,entitled I'll Sleep When I'm Dead, which she compiled at his express request following his death from cancer in 2003. The host is the superb Backlisted site run by Andy Miller and John Mitchinson, an invaluable resource for all lovers of good books young and old (and by that I mean both listeners and books...)

1. Zevon was, in Bruce Springsteen’s view and mine, 'one of the great American songwriters.'  Listen to anything of his and you will quickly pick up on the bite, erudition and humour of someone who understood the secret badness of the world and could still make it sound uncommonly elegant.

2. If you’ve never listened to Zevon previously you can start with this top ten that I compiled as a Spotify playlist. Full disclosure: the inclusion of Werewolves of London is rather a sop to it being his Greatest Hit – if headed to a desert island I would prefer Renegade from the Mr Bad Example album. I’d take Werewolves, though, were it Zevon’s live version circa 1980 in which he would re-jig the lyrics to name-check Mailer’s Executioner’s Song and Brian De Palma’s movie Dressed to Kill, wearing his cultural smarts proudly in the manner for which we loved him.

3. The reason I heard that live tape, and umpteen other such rarities, was thanks to a woman called Diane Berger who ran one of the internet’s early WZ fanpages under the moniker of zevonfan1, and who sent me all sorts of dubbed copies in the mail from the US circa 1996 – great generosity born of shared enthusiasm.

4. If I’m a little less of a Zevon fan today than I was then, it’s because I have never quite gotten over reading Crystal Zevon's book. Anyone who teaches Creative Writing and has recourse to the canon of great American short stories will know that sinking feeling when for the umpteenth time while stood before a group of undergraduates you are forced to observe, ‘Of course his life and work were greatly affected by his addiction to alcohol...’ Thus Fitzgerald, Cheever, Carver et al. And thus Zevon.

5. I had known Zevon was a very bad drunk during his lowest personal ebb, and yet his extraordinary gift for a rueful love song and the melancholy beauty of his turn of phrase tended me to see him as a man who had been more often ill-used than using, more hurt than hurting. Well, Crystal's book sure turned my head round on that score, notably from the point where she first describes Warren punching her in the face... She forgave him, at length and over time, and of course the credit and debit sides must be carefully balanced by those who weren't there. But still, talk about a nail in the coffin of the myth of the romantic troubadour. Goodbye to All That, as they say.

6. I’ve written two oral histories myself: Alan Clarke and Sean Penn: His Life and Times. The form demands a subject who’s lively, who inspires the telling of tales, even – or especially – contradictory ones. It can be useful if that subject was a bit of a hellraiser - though raising hell can get wearying to read about, just as it can be to observe, and even to participate in. Crystal Zevon’s book arguably has a shade too much of Zevon’s worst behaviour. Regarding the work, while it’s great on the 1970s period which its author knows intimately, and on where Zevon’s songs came from at that time, it’s a little less satisfying about the body of work from 1987-2002, which I think includes most of his best stuff.

7. A confession: I’ve never really listened much to The Wind, the album that Zevon made at great speed with assorted collaborators in the period between his cancer diagnosis and his death. As artists sometimes do, he tried to direct the way he went out, to set-design his final curtain; but his work had always been coloured by the black wisdom that ‘everybody’s headed for a hole in the ground.’ To wit, this observation from a 2003 interview in the New York Times:

8. Favourite Zevon lyrics? Too many to mention. But the following staves just seem to me an unusually brilliant run to have inserted in a pop song: namely Porcelain Monkey, which is about the life of Elvis Presley, a subject Zevon characteristically dismissed as ‘a very sad story, and not an interesting sad story.’ Zevon, in fact, made plain that in 1977 he was more upset by Robert Lowell’s passing than by Presley’s. But to which of those two gentlemen can Zevon’s accomplishment be more usefully compared?


From a shotgun shack singing Pentecostal hymns,
Through the wrought iron gates, to the TV room,
He had a little world, it was smaller than your hand,
It's a rockabilly ride from the glitter to the gloom.
Left behind by the latest trends,
Eating fried chicken with his regicidal friends,
That's how the story ends,
With a porcelain monkey...

This event - in the Orwell Hotel, aptly - is now booking. Come along, it'll be lively. 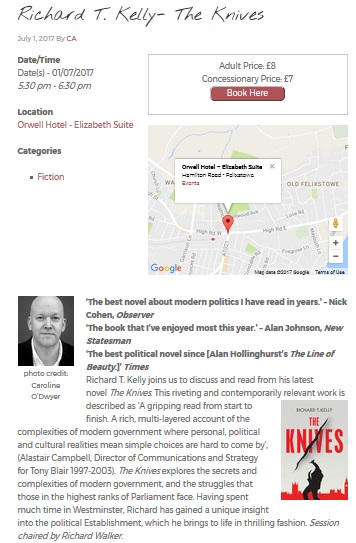 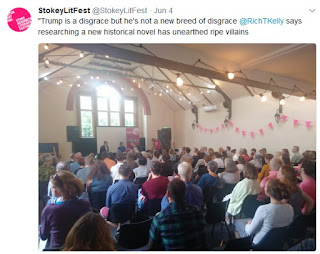 There are a lot of literary festivals in the firmament these days, and London has a big share in them, but there seems to be a good consensus that Stoke Newington offers one of the liveliest and most enthusiastically attended. I made my second visit there the other week - the first was in 2011 for The Possessions of Doctor Forrest - and this time I was debating the dangerously hot topic of whether our political life is stranger than fiction, the recent material for such a debate amounting to as much as any of us could reasonably process.

I was talking Knives, of course, and in very good company being on the Stokey platform with Jonathan Freedland, the accomplished Guardian journalist who writes thrillers under the nom de plume of Sam Bourne; and Terri Stiatsny, an ex-BBC reporter who now specialises in prize-winning fiction derived from real-world political events, and who graciously did the chairing of the event though, obviously, we all three of us had things to say about what we do and why. Jonathan's new book isn't actually out yet but imagines a conspiracy against a Trump-like US president. Terri's latest, Conflicts of Interest, is in paperback now.
Posted by Richard T Kelly at 08:10:00 No comments: Links to this post

The Knives, out for the night, at City Lit Talks Back 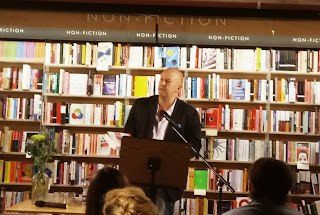 The City Literary Institute ('City Lit') in London's Covent Garden is one of the nation's great institutions for adult education, and I've been pleased to teach various short courses in Creative Writing there over recent years.

They also do a grand job of making a regular platform for their students to present work in a very public forum: namely the big Tottenham Court Road branch of Waterstone's, which plays host to a monthly City Lit Talks Back where tutors and learners alike can get up to read whatever they've been working on.

I took a turn there myself a few weeks ago, in a slot kindly created for me so as to mark the paperback publication of The Knives. I enjoyed myself, generally as a listener, and specifically when an MP's assistant told me she was buying a copy of the novel as he'd been told it was brilliant. But by whom? I'm still hoping for a chance to speak in the Commons, you see, even if it's only a meeting room...
Posted by Richard T Kelly at 06:21:00 No comments: Links to this post