The narcissism of Matthew Parris For me, Times columnist Matthew Parris will always be the prize Thatcherite prat who decided (c.1983, for the benefit of ITV's World in Action) that he would be setting a moral example by living on the dole for a week in Scotswood - where, by his estimation, the local people (whose livelihoods Parris's Government was busily serving to destroy) were, surely, protesting too much about their privations.
For that week on Tyneside, of course, Parris lived miserably, and couldn't afford to keep his lights on by the end; but, unlike the proper residents of the area, he was free to check out of that particular hotel and wash his hands of that particular slice of life, while trying, post facto, to sound awfully wise about it. All in all, a bit of a sponger, that Mr Parris.
Parris is older now, ostensibly more chary of making a sanctimonious charlie of himself, for all the temptations a newspaper column offers in that line. But hark at his latest effort in the Times. (I won't link.) Yes, we do already know that Nick Clegg hates Gordon Brown, and that the contempt is mutual. This was clear last Thursday, as Parris notes. If Clegg should be kingmaker, Brown is finished, for sure. Some of us Labour voters could imagine worse scenarios... But, really, you have to be a Tory blusterer like Mr Parris in order to a) give Clegg huge credit for that paltry animosity, and b) project yourself into Clegg's shoes and so come up with the following pseudo-dialectical explanation for the Lib Dem leader's feelings on the matter:
"Mr Clegg, I believe, sees no reasons other than historical ones why the modern Labour Party should even exist. He thinks Labour has traduced and betrayed progressive politics and that there are strands in its DNA — the old Left, the trade union links, the inborn, knee-jerk collectivism, the State-authoritarianism and the suspicion of individual liberty — that condemn it for ever to lead Britain’s centre-left astray. Ideologically, Mr Brown embodies that genetic inheritance. Personally, Mr Clegg can’t stand him. That’s my take on Mr Clegg. It’s only a guess, but I would put my laptop into the Magimix if — Labour having lost its overall majority — he did anything to put Gordon Brown back into Downing Street."
I'm already gut-sick of hearing Tories like Parris talk as if they had the slightest interest or stake in principles of 'progressive politics.' If they want to drivel on about the 'betrayal' of same, they ought really to have done time in some sanctimonious Troyskist groupuscule, rather than grafting for Rupert Murdoch. Memo to Parris: sure, keep peering into the mirror on this matter, but don't presume to pronounce on anything but your own wan reflection therein.
(The picture above, BTW, is of your correspondent in Scotswood c.2007. If that seems narcissistic, please excuse: I just didn't fancy putting a pic of Matthew Parris up instead...)
Posted by Richard T Kelly at 15:48:00 No comments: Links to this post

In entertainment news just in: that 30-minute telly script of mine that went before cameras back in February under the title of Jennifer has, in the final stroke of the post-production process, got itself a brand new title: Eclipse. It will be screened, among all 7 of this year's Channel 4/Coming Up films, at the Edinburgh Film Festival in June, and presumably it will air on Channel 4 in the summer - such were the windows afforded last year's Coming Up batch.
Eclipse is, of course, a title with some form behind it, and I do hope that youthful movie fans currently waiting keenly for the next filmed instalment of the Twilight saga (Twilight: Eclipse, due in cinemas this July) don't get themselves confused by this renaming of our little piece, or suspect us of trying to steal a bit of that vampiric thunder.
For me, in movie terms, Eclipse will always mean Antonioni, L'Eclisse being one of the maestro's prime pieces of melancholic urban beauty. Needless to say, it looks to have been posted in entirety on YouTube. Eclipse is, in any case, a perfectly good replacement title on poetic grounds for the film that used to be Jennifer. The little veiled tip of the hat to a director I always venerated is a pleasing bonus. In fact I don't think Zoe Tapper or Andrew Buchan would have looked at all out of place in any work by Signor Antonioni made during his golden years of the 1950s/60s.

NUFC: It is Accomplished

Tonight's title-clinching win at Plymouth was strikingly similar to the previous 28 we've enjoyed in this friendly old Division 2 c. 2009-10, but particularly of a piece with the last six that have come on the trot from a team now easing through the gears. A big part of the story from Home Park seems to have been the touchingly good sportsmanship of now-relegated Argyle, offering Toon fans a congratulatory banner on the pitch beforehand, plus some choice musical selections over the tannoy, 'Blaydon Races' among them, once all was squared away. Accordingly come the final whistle some of the Mags were on the pitch, thinking it all over, and it is now. A close season's work begins properly for Chris Hughton from this point, the gaffer now set the recurrent task of figuring out how we're going to beat Stoke, Blackburn, Wigan and the Mackems. Through Andy Carroll 'rising high to power home a header' as he did tonight and has done throughout the Fizzy Pop campaign? I wish...
Posted by Richard T Kelly at 15:47:00 No comments: Links to this post

I didn’t watch Thursday night’s party leaders debate on ITV. I was down the pub, with two of my oldest mates, and, god knows, such opportunities crop up rarely at this time of life. Plus, I already know how I’m voting and why; and I know very well what I think of the Liberal Democrat party and of Nick Clegg, who nonetheless appears all of a sudden to be striking great swathes of the British people not as some mere potential kingmaker but, rather, the straight-talking force of common sense incarnate.
Seeking the upside... I suppose it makes a change from noting the main parties’ discreet wrangles over how to plug that £167 billion deficit in public finances. By contrast, for some voters, Clegg must indeed seem like a much-needed blast of honesty. And I have to admit that The Swing to Clegg is a more novel and welcome staging post in the course of this election than the previous week’s bleatings from all those Tory shopkeepers who (surprise!) don’t want to pay an extra 1% in National Insurance.
For me, the deficit is still the top story. The Treasury cannot be run in the manner of a private household, not is government a limited company, and so it still seems important to nail the Tories on their nonsense about efficiency savings, as did the excellent Oliver Kamm, quoting Nigel Lawson’s memoirs (‘Incoming Conservative Governments usually tend to be overoptimistic about the scope for ‘eliminating waste’ - a pledge which is always more popular than specific spending cuts...’)
John Rentoul also put it well last week in rubbishing Cameron’s 'Big Society' waffle:
"I am as opposed to the nanny state as the next person. I do not like Gordon Brown's statist assumptions on the economy and public services. But the helium at the heart of the [Tory] flying pig manifesto is the idea that if the Government stops doing stuff, people will organise themselves to fill the gap in ways that are equitable, fulfilling and tax-saving."
Posted by Richard T Kelly at 16:09:00 No comments: Links to this post 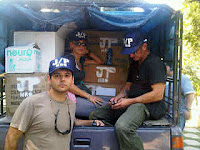 Several kind friends mailed the other day to tell me that my Sean Book had made an unlikely, half-glimpsed cameo on Jon Stewart's Daily Show last week. (I'd never have known, as I've found the Show a pretty tiring watch just on the strength of a few past viewings.) All that happened (per the last 10-15 seconds of the clip below) is that some guesting actor mocked up a joke autobiography of himself by wrapping a homemade cover around the Canongate US hardback edition of Sean Penn: His Life and Times, and Stewart, unravelling said mock-up, seemed momentarily diverted by the contents of the actual book. His reaction - 'Sean Penn has a biography...?!?' is one that I could take as wounding proof of the book's utter anonymity in the US market, even though its subject is a sizeable public figure and double Oscar-winner, also a substantive humanitarian recently seen (as pictured) putting his money and his efforts where his mouth is on the crisis issue of the Haitian earthquake.
But, really, I can't complain. Some of Sean's most wonderful movies are productions that scarcely any Americans seem to have heard of either, and that neglect is rather more worthy of protest...