Crusaders back in the Financial Times

"Oh, the state of the nation / Is causing deprivation." Had I had been asked 20 years ago what the phrase 'State of the Nation' meant to me personally (and, of course, back then nobody was asking me anything of the sort...) I would have gladly discoursed about either a) various drama series I had seen on television, mainly written by Alan Bleasdale, or b) a mid-ranking recent single by New Order, a band I have always adored and thus forgiven for some of their dodgier lyrics (as above.) But this is Spring 2008, the season of the State-of-the-Nation novel, and it seems that I have written a contender in this peculiar category. Adrian Turpin of the Financial Times, who wrote an early review of Crusaders for which I was massively grateful, has now graciously cited the book again in a long review/thinkpiece concerning various titles, including the paperback of Blake Morrison's last novel, and Gordon Burn's Born Yesterday. For my part I couldn't be more pleased to have my book described by Adrian Turpin as "an enjoyable and unapologetically Victorian slab of social realism." And, to extend the theme of my previous post, I have to say that, as intriguing as I find the figure of Tony Blair, I'm much more interested in Pontius Pilate. The general tendency, mine too, is often to see whatever's happening in politics today as the bitter end, the final insult. And some observers will indeed have seen worthier standards applied in public life. But I don't think there's all that much new under the sun. At any rate, if we the people want to revive or reform our politics then we're obliged to get actively involved in politics, from day to day. As Bernard Sumner sang elsewhere in the aforementioned mid-ranking New Order tune, 'Yes, it's the state of the nation / That's holding our salvation...'
Posted by Richard T Kelly at 15:58:00 No comments: Links to this post

It's getting on for a year now since Blair's resignation. I know, the leavetaking took forever, so let's not rush to the anniversary retrospectives... Still, I raise the matter now not merely because a steady drip of Blair re-evaluations has turned into a running tap because of Gordon Brown's anguished and ungainly recent performances. And not because the whole Blair Conundrum was a key part of the backstory of Crusaders, as Joel Rickett cottoned to very quickly. No, it's because last month I sat on a panel called 'Blair In Fact and Fiction' at the Aye Write festival in Glasgow, alongside Martin Bell, Helena Kennedy and Joan Smith, and as ever with these things, given the time and the format, you rarely come away feeling you've said what was truly on your mind. This eyewitness reporter from the Herald clearly felt that we had all lined up over Tone with the sharpened stilettos out like it was Murder on the Orient Express. ("They all did it!") Indeed the chap mentioned therein who 'stood up for Blair' chatted with me afterward at the bookshop signing. (I hope he found the copy of Crusaders he bought not too yawnsome...) But there's so much to say about public figures of this prominence. Didn't even Garcia Marquez once say he would need a million pages to do justice to Che Guevara...? (Staunch people of the Left who always loathed Blair would shudder at that analogy.) In any event, what I think I said at Aye Write and have certainly said at every other platform occasion is that when in 1996 Blair described Pontius Pilate as the archetypal politician, I thought it was the most interesting thing I'd ever heard a pragmatic/centrist leader say. I still do.
Posted by Richard T Kelly at 05:49:00 No comments: Links to this post

Crusaders reviewed in the Church Times!

Seems like a good match to me... This is the April 18 issue of Church Times to be precise, now on the newsstands or otherwise hitting subscribers' doormats. The review is by David McLaurin, who I believe to be a novelist as well as a (former?) priest. At any rate his take on the novel is very gratefully received: "A big book... but the author transforms the blockbuster genre into something more profound... [It] gives the reader a satisfyingly intense and cathartic conclusion that is well worth waiting for... a fearsomely well written, if somewhat bleak, book."

(The picture is of inside Durham Cathedral, taken by John Dalkin, who posts on Flickr as 'Heaven's Gate.)
Posted by Richard T Kelly at 07:09:00 No comments: Links to this post

"London to Newcastle isn't rated among the world's great train journeys, but for any returning native of the northeast there are sights along the line that will elevate the spirits..."
The new issue of the excellent Prospect magazine is now on the stands and includes an essay by myself in the 'Witness' strand which somebody has wittily entitled In Search of Lost Tyne. Yes, it's a series of snap-shots of the current state of Newcastle upon Tyne - socially, economically, politically, and culturally. In a sense, because the plot of Crusaders concludes in 1997, this piece of reportage brings the novel's story up to date, and with rather more of a debt to the actualite.
Needless to say there's a great deal more to enjoy in the magazine, including an essay by the South Shields-born historian Robert Colls on the neglected novels of Melvyn Bragg; quite a bit about the 40-year anniversary of May '68; and a long interview with Christopher Hitchens by Alex Linklater, in which it is casually noted that Hitchens enjoys friendly relations with the 'independent-minded' Sean Penn. Any sane/civilised person would want to be the proverbial fly on the wall when those two meet for cocktails.
Posted by Richard T Kelly at 02:14:00 No comments: Links to this post

A week or so ago Alexander Cockburn made a witty point in the course of a piece on his radical site Counterpunch, one that other commentators should kick themselves for having missed. At least, I didn't see it noted anywhere else in the drizzle of Dem-Feud coverage, and I read as much of it as you do... Cockburn was weighing up the broadly disastrous contribution of Ex-President Bill to his wife's campaign, and drew special attention to Bill's "managing to reignite Hillary's Bosnian disaster, where she converted a pleasant outing into an anecdote of courage under fire unexampled since Audie Murphy took on a battlion of German soldiers single-handed. Bill says that Hillary came up with this fictional packet because it was late in a long day and she was kind of tired and not thinking straight. So, as my coeditor Jeffrey St Clair, asks, what happens four hours later when that 3am phone call comes?" Makes you think, doesn't it? One wouldn't harp on it, except that I understand the latest Clinton TV attack-spots harp unashamedly on the theme of "Who do you think has what it takes...?" But, for now The Dream lives on - or do I mean the nightmare from which, one morning soon, we shall awaken? 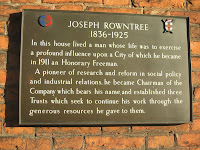 Did you happen to see this report in the Times? Would have made the old Quaker quake, I daresay:
"Many participants said religion divided society, fuelled intolerance and spawned “irrational” educational and other policies... The findings contrast with [Joseph] Rowntree’s “scourges of humanity”, which included poverty, war, slavery, intemperance, the opium trade, impurity and gambling..."
Some of those old scourges have stuck around, of course. But what do you suppose has got people newly vexed about religion? Perhaps the sense that until recent years, in the UK certainly, religion had seemed not to impinge on any man or woman who had no use for it. Now it's irritatingly unavoidable in the atmosphere. I used to feel fairly glad that I had read the King James Bible and had a working knowledge of theology. At times I could see something in the Marxian idea of religion as "the soul of a soul-less world". You can't be a George Steiner fan (see below) and not have a use for some notion of 'transcendence.' And there is definitely a spiritual dimension to our lives, however one might choose to describe the spirit in question.
Used to, yes. Lately I'm rather coming round to the Bertrand Russell stance. Or as Christopher Hitchens said to Joe Scarborough: "I am atheist. I‘m not anti-Catholic. I am not anti-Protestant. I‘m not anti-Greek Orthodox or anti-Judaism or anti-Islamic. I just think that all religious belief is sinister and infantile and belongs to the backward childhood of the race."
I wasn't a respondent to the Rowntree survey, and don't know what the full report amounts to, but on the basis of the coverage perhaps I can say that as a citizen my views were in some sense reflected? 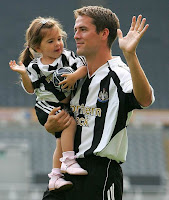 My late grandma was one of those people who genuinely "liked to see all the North East teams do well" in the football leagues, and would sit through the entirety of the Saturday final scores just to see how Hartlepool, Carlisle and Darlo had done. This is probably something to do with being from Durham, rather than Tyneside or Wearside. For a taste of a more partisan view, look at/listen to this and this from a packed St James's Park yesterday. Being the North East top dog isn't the grandest bragging right in the game just now, not with the top 4 far from reach and the likes of Villa, Blackburn, and Portsmouth having left Newcastle behind them this season. (Hence the importance of the career plans of the fella pictured above with his adorable little moppet on a startling day back in 2005.) But it'll suffice for the time being. After all, coming 11th or 12th in the top division these days is pretty much the same as coming 7th i.e. you still get nowt, and your passports stay in your drawers, though I can name at least one side for whom 7th place seemed to count as "taking the Premiership by storm" a few years ago. Alas, for me (and for other soul-searching Toon fans, I'm sure) it's Middlesborough who still hold the whip hand in the region, purely on account of a League Cup won as recently as 2004. Whatever they say about the pains of managing Newcastle it remains the case that to be a legend the gaffer only has to win six matches in a season, so long as they're all in the same cup competition. But Kevin Keegan has a bye through any such miserly qualifying process on account of pre-approval such as this.
Posted by Richard T Kelly at 13:41:00 No comments: Links to this post